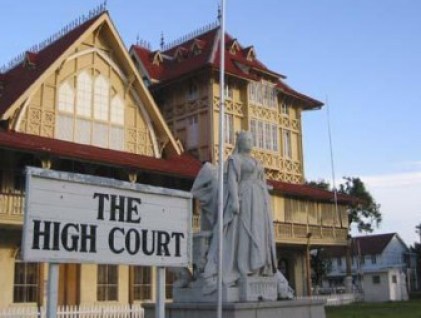 TODAY, Guyanese are expecting the ruling of Chief Justice (ag) Roxane George-Wiltshire in the Misenga Jones v the Guyana Elections Commission et al High Court case, which will determine the legal action which must be taken by the Chief Elections Officer (CEO) Keith Lowenfield towards a declaration of results of the 2020 General and Regional Elections.

In this latest court action, Misenga Jones – a registered voter from Tucville, Georgetown – is challenging the elections commission’s decision to invalidate the declarations made by the returning officers (ROs) in the country’s 10 electoral districts, and the use of Certificates of Recount as the basis for the declaration of the elections results.

Oral arguments in the case took place virtually via zoom and was broadcast live on YouTube on July 17. A team of legal luminaries representing Jones argued that the declarations made by the 10 returning officers in March, 2020, cannot be set aside.
Leading the team was Trinidad and Tobago’s Senior Counsel John Jeremie, who told the court that, as outlined by the Caribbean Court of Justice (CCJ), the approach taken during the national recount crossed boundaries outlined in Article 163 and breached the Representation of the People Act (RoPA).

He said that any attempt to declare the results of the General and Regional Elections using data from the national recount would be unconstitutional. Drawing attention to Section 84 of the RoPA, he pointed out that returning officers are required to make their respective declarations and the CEO, in accordance with Section 96 of the Act, is required to consider the declarations in the preparation of his elections report.

“Order 60 cannot bring about a new legal regime for the basis of the declaration of the votes. The CCJ has expressly stated in Eslyn David that Order 60 of 2020 cannot bring about a new legal regime. There is a clear process set out for the declaration of results [with] which the CEO must comply,” he told the court.
He further contended: “Order 60 permitted a process to be used which established the validity of votes not only by persons not authorised to so do and after the validity of votes were already determined by the returning officers, but on criteria and standards inconsistent with the Representation of the People Act.”

The Trinidadian Senior Counsel said that it is now only left for the declaration of the results of the elections to be made in keeping with the law under Representation of the People Act and Article 177 of the Constitution.
In his affidavit in answer, the chief elections officer told the court that if he is to conduct his duties in keeping with the constitution and law, the national recount cannot form the basis of a declaration.

Lowenfield explained that the valid votes documented on the Certificates of Recount are not the same as determined by the presiding officers on March 2, 2020 and vary from the directions given during the election commission-supervised national recount.

He highlighted that the approach taken during the national recount, which was triggered by Order No. 60, was inconsistent with the procedures outlined in the RoPA and the official manual for presiding officers and other polling day officials (revised 2019).

He provided the High Court with approximately five examples in the form of exhibits in which the elections commission, during the national recount, validated votes in contradiction with the Representation of the People Act. For example, in Region Four (Demerara-Mahaica), 305 rejected ballots were changed to valid and 192 valid ballots changed to rejected.

Senior Counsel Neil Boston – the attorney representing the CEO — also told the court: “What Order 60 came on stream for is to give GECOM, the unlawful power to resolve elections disputes, which Article 163 as put it in the exclusive jurisdiction of the elections court.”
He pointed out that the preamble of Order No.60 speaks of disputes and, in using it, the elections commission created a new electoral regime in contradiction to the Representation of the People Act, and most importantly, the constitution.

Attorney General (AG) Basil Williams had also argued that the GECOM Chair Justice (Ret’d) Claudette Singh is constitutionally bound to declare the Leader of the APNU+AFC David Granger the President- elect in accordance with the advice tendered by the CEO.

In his online appearance before the chief justice (ag), when asked what the elections commission should do if the advice of the CEO is flawed, the AG put forward that, according to law, the commission’s only recourse would be to the High Court via an elections petition.

Meanwhile, in his written submission on behalf of General Secretary of the People’s Progressive Party/Civic (PPP), Bharrat Jagdeo and PPP/C presidential candidate Irfaan Ali, Senior Counsel Douglas Mendes submitted that the Recount Order dealt with the procedure for transparent counting and it is the procedure that was different from that which is required under the RoPA, but the “substance was the same: to count the ballots.”

He said if the applicant was concerned about the legality of the recount, and not merely the result of the recount, she could have made the application much earlier and that for one to push for the use of the March data, which includes the contested Region Four declaration, would be “the gravest of injustices.”

The submission stated: “…even if this court were to be persuaded that the Order for the recount was unlawful, either because section 22 is wholly unconstitutional, or the recount was otherwise beyond the powers of the GECOM, the court should nevertheless deny the applicant any relief because of undue delay.”
Today, July 20, 2020 marks 140 days since the March 2 General and Regional Elections were held across the 10 electoral districts and results have not yet been declared.