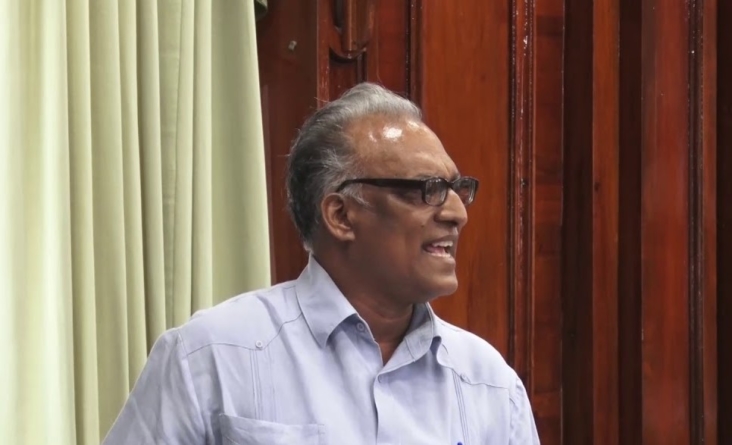 Dear Editor,
Thanks to the internet and modern communication technologies, the uncensored attempts to rape Guyanese citizens of their democratic rights have unfolded in almost every local living room and the full view of the world. Embarrassing electoral activities in Guyana handled by the Guyana Elections Commission (GECOM) and coupled with outlandish reactions of Mr Granger and his APNU/AFC supporters confirm a shift of focus from the subtle and sometimes glaring attempts between the two at creating incremental biased rigging advantages. It has graduated to outright public ‘thieving’ of our democracy and the clear justification of a necessity to cleanse a diseased GECOM.

Mr Granger in this regard seems to assume that he speaks to the stupid, deaf, dumb and blind as he hypocritically continues to tell the world that as the leader of the Executive, he nor his party would interfere with the operations of the Guyana Elections Commission (GECOM). This is indeed far from the truth! His party’s surreptitious plots have been long laid out, directed and activated through the coalition’s Commissioners led by Vincent Alexander and the Chief Elections Officer Keith Lowenfield who continues to act seemingly without restriction, in maintaining the imbalance of a fourth Commissioner. In the events which unfolded with the use of a contaminated spreadsheet that showed falsifications in favour of the APNU/AFC, what are the reasons for Mr Lowenfield’s refusal to confirm its validity or clarify its origin?

Perhaps the most visible of the numerous disdainful actions by David Granger-led APNU/AFC coalition partners commenced with their support for his unilateral appointment of James Patterson as GECOM Chairman in 2015. Unconcerned about citizens’ reactions, the recent actions demonstrate that they are unperturbed and have no limits to their relentless pursuit of rigging, and unfair advantage during the period leading up to the March 2, 2020 General and Regional Elections in Guyana. Our nation has witnessed the haemorrhaging of decency, transparency and expected practices that have had established precedence in our general electoral framework.

The APNU/AFC and GECOM Secretariat has used almost every trick in the book of deceit and fraud while being contemptuous to constitutional requirements and rulings of the Judiciary including the Caribbean Court of Justice. It took a vigilant PPP/C Opposition supported by key stakeholders to keep keen scrutiny and react at extremely short notice, to counter deliberate efforts to allow the Register of Registrants to expire; and attempts by the PNC to remove the names of legitimate voters and other sinister manipulative adjustments. Of note, Mr Granger and his cabal’s flagrant abuse and violation of the use of State resources without care or candour in their political campaign and dances.

It is therefore unsurprising, that the PPP/C agents would have had to toil and execute over six verification exercises of the various lists due to sudden and new rules using its expenditure, although the Parliament approved over seven billion taxpayers’ money for use by GECOM. Meanwhile, the dictatorship led by Mr Granger gained grounds and weight and the illegal cabal extended its period in office. The inconsistencies have been myriad and uncertain surrounding Mr Keith Lowenfield and the GECOM operations. Further, the recent events regarding the deliberate delays invalidating the Region Four Statements of Poll have strengthened the need for forensic examination and are driving factors leading the justifications of strongest the scrutiny.

Many have argued that there are local laws to rebut the blatant violations such as the courts of law when the likes of Mr Mingo as the Returning Officer for Region Four, callously decides to or is instructed by other clandestine forces to use X-Ray vision to come up with accurate final counts of the Statements of Poll. History in dealing with GECOM has proven, however, that in addition to possessing X-Ray vision, the RO’s could disappear when they have to receive the request for a recount. Such was the case of Ms Melanie Marshall in recent elections and there have been instances where forces prevented the querying parties from reaching the ROs within the stipulated timeline. The fact that the courts have not yet addressed the PPP/C’s 2015 election petition gives testimony to the farcical nature of the process.

Anyone guesses that Mr Granger would also disassociate himself from the embarrassing fiasco articulated by his former Minister of Foreign Affairs Mrs Karen Cummings. In the vilest way, she attacked and accosted the international observers including representatives of the OAS, Ambassadors of the USA, the European Union, and other foreign Missions, by threatening to withdraw their accreditation to the GECOM process, and by extension, expulsion! They have threatened the local party agents and international observers with bomb threats and using the police to forcefully remove legitimately accredited persons to the process in an attempt to find avenues to facilitate further the hijacking of our votes. Thanks to the determined strength and will of those present, they stood their ground.

How sick is this cabal? They certainly do not have Guyana’s interest first given their willingness to expose our dear country to international sanctions. The observers have held scrutiny over the process and provided the measures of countercheck, which indeed, confirmed the many undercurrents that the numerous shortfalls by GECOM have realised. Importantly, they have stated that without the proper verification of the Region Four’s Statements of Poll, the results lack credibility and would not be given recognition.

Mr Granger’s outright defiance of the Constitution and manipulative efforts to influence GECOM still has had its overtones, causing tensions to rise is sky-high, in particular, with the revelation that efforts are being made to swear him in as President. The ulterior motive of the GECOM administrators and some staff has certainly caused chaos. Based on public declarations of Mr Harmon, the cabal seems set to install Mr Granger as what would be an illegal President, bypassing several critical steps including the verification of the Statements of Poll in the process.

It is evident and disappointing that the Chief Elections Officer Keith Lowenfield has seemingly moved to impose many of these blatant and violating actions while usurping the authority of the Commission. These continuous occurrences by the CEO are now clear in the eyes of the world, and he will certainly be held accountable. The actions of these fraudulent imposters have now invigorated a revolution never contemplated and one they will never overcome in their lifetimes.

We are saddened by the death of Seedat Hansraj, who died in a struggle for free and fair elections at the hands of a Guyana Police Force while protesting for his vote to be counted. His efforts will not be in vain and it puts more blood on the hands of dictator Granger.