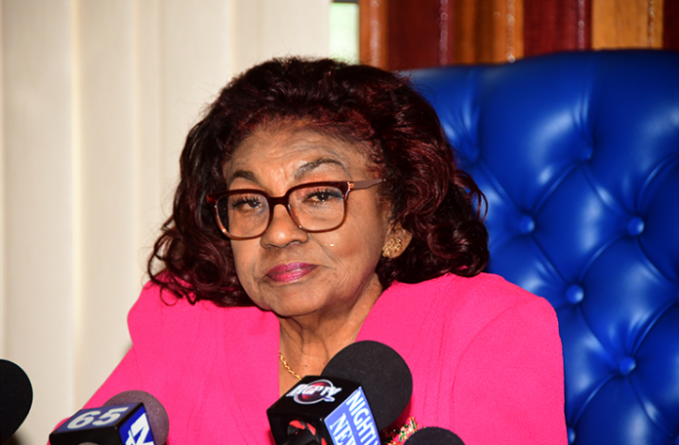 PRIVATE criminal charges have been filed against the Chairperson of the Guyana Elections Commission (GECOM), Justice (Ret’d) Claudette Singh, for alleged malfeasance in public office.

The charges, filed by two citizens in the Georgetown Magisterial District on Wednesday, are all linked to the Chairperson’s handling of the 2020 Elections, inclusive of the highly controversial National Recount. Based on documents seen by the Guyana Chronicle, one of the two private criminal charges was filed by Onita Walcott of Victoria Village, East Coast Demerara. In detailing the particular of the offence, Walcott alleged that Justice Singh, while acting in her official capacity as Chairman of the Elections Commission, “acted maliciously and unlawfully” on July 11, 2020 when she refused to accept the Chief Elections Officer’s Elections Report on the General and Regional Elections held on March 2, contrary to Article 177 (2) (b) of the Constitution.

Walcott said based on the advice of the Chief Elections Officer, Keith Lowenfield, the A Partnership for National Unity + Alliance For Change (APNU+AFC) Presidential Candidate had obtained the most votes at the Elections. Based on public record, the Chair of the Elections Commission, upon receiving the Chief Elections Officer’s Report on, or about, March 14, 2020, had placed it in abeyance along with the 10 Declarations made by the Returning Officers to facilitate a National Recount as a result of allegations of electoral fraud levelled by the People’s Progressive Party/Civic (PPP/C).

Once the National Recount was completed, Lowenfield submitted a second Elections Report on June 23; however, in doing so, he had excluded approximately 115,000 votes alleged to have been compromised by irregularities and voter impersonation. His report, therefore, was based on the credible votes counted during the recount exercise. However, the Caribbean Court of Justice (CCJ) invalidated that report, on the grounds that Lowenfield could not have unilaterally invalidated the votes. Notably, in its judgment in the case Bharrat Jagdeo and Irfaan Ali v Eslyn David and others, CCJ ruled that the President and members of the National Assembly could only be elected based on information supplied by the Returning Officers.

Due to the fact that the Returning Officers had no role to play during the National Recount, Lowenfield, in submitting his third Elections Report on July 11, resorted to the declarations made by the 10 Returning Officers in March, but that report was also rejected by the GECOM Chair.

Justice Singh had insisted that the report be compiled using data generated during the National Recount. The matter is now tied up in the Courts. However, Walcott believes that the GECOM Chair’s actions amount to “misfeasance in Public Office” contrary to the common law.

A similar charge was filed by Keith Ondaan of Central Amelia’s Ward, Mackenzie, Linden. According to Ondaan, Justice Singh acted unlawfully, when she failed to heed the advice of the Chief Parliamentary Counsel, Charles Fung-a-Fatt, S.C and GECOM’s Legal Advisor.

In his sworn statement, the Lindener alleged that between March 16, 2020 and May 18, 2020 the Chairman of GECOM acted recklessly and unlawfully when she disregarded the advice of the Legal Officer of GECOM on the 16th March 2020, as well as the advice of the Chief Parliamentary Counsel Mr. Fung-a-Fatt S.C that a recount of the votes of the March 2 Regional and General Elections was unlawful and unconstitutional. It was said that Justice Singh knowingly gazetted a Recount Order in the Official Gazette on May, 4 nonetheless. The Order was amended on May, 29. The case is expected to be heard in the Georgetown Magistrates’ Court on Wednesday, August 5, 2020.

PETITION
The private criminal charges against the Chair of the Elections Commission come days after a small group of Guyanese petitioned her to step down.
In a letter addressed to Justice Singh, the small group of signatories said that, while President David Granger had placed confidence in the GECOM Chair, they are currently dissatisfied with a number of decisions taken under her watch.

Chief among the concerns is a decision taken by Justice Singh to terminate the House-to-House Registration process in 2019, shortly after she was appointed to serve. The petitioners stated that the challenges currently faced, are, in part, linked to GECOM’s failure to cleanse the National Register of Registrants Database (NRRDB), and, by extension, the List of Electors. According to them, the flawed and bloated List of Electors is at the heart of the fraud that was uncovered during the National Recount.

Further, the petitioners, in the letter, expressed grave disappointment at Justice Singh’s refusal to declare the results of the Elections in accordance with the Elections Report submitted by the Chief Elections Officer, as required and prescribed by the Constitution.

The National Recount, conducted in May-June, had unearthed, according to the Chief Elections Officer, Keith Lowenfield, well over 6,000 irregularities and cases of voter impersonation but the Chairman of the Elections Commission had said there was little that GECOM could do. She has repeatedly instructed the Chief Elections Officer to compile an Elections Report based on the National Recount, inclusive of the votes compromised by clear electoral fraud.

They have also accused the GECOM Chair of constantly changing the parameters of the recount process and procedures to suit the demands of the People’s Progressive Party/Civic (PPP/C); unilateral inclusion of fraudulent votes during the recount process; and the unilateral setting aside of the lawful declarations made by the 10 Returning Officers.