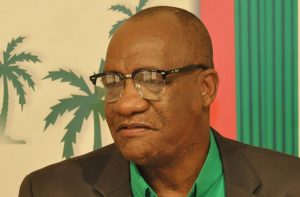 Chief Justice (ag) Roxane George-Wiltshire will this morning preside over an emergency hearing on an application seeking to have the tabulation of votes in Region Four at Monday’s general elections done according to the law prior to the declaration of a final result.

On Thursday Justice Navindra Singh granted an injunction in the matter against the Guyana Elections Commission, Chief Election Officer (CEO) Keith Lowenfield and Returning Officer for Region Four Clairmont Mingo. The substantive matter will be heard by Justice George this morning and GECOM Chair Justice (ret’d) Claudette Singh is expected to be in attendance.

“I have been advised that in response to the Court Order, GECOM is required to appear in court tomorrow (today) and therefore will comply,” GECOM Public Relations Officer Yolanda Ward told media last evening.

Her comment came just over an hour after Joseph Harmon, campaign co-chair of the APNU+AFC announced to the nation that President David Granger is likely to be sworn in if the injunction granted to the opposition is discharged.

There has been mounting international and local pressure for the results for Region Four to be tabulated in accordance with the law and Granger has been urged against transitioning to a new government unless the credibility of the results are established.

Harmon, who said that there should have been a meeting yesterday by GECOM on this matter, stated that all of the results for the 10 electoral districts have been tabulated and the APNU+AFC should be declared the winner of the March 2 General Elections.  The result for Region Four has been declared fraudulent by the opposition PPP/C and it has launched the legal action to ensure a full verification of the result. Five observer groups and the United Nations, the US, the UK, the European Union and Canada have also pressed for a full verification of the Region Four tally before the final declaration of results.

Harmon said that Lowenfield is required to make a declaration of the final tabulation and forward same to the Commission for approval but that since the Commission has received an order from the court preventing this declaration it has decided to move for the discharge of the order.

“The Chairman of the Commission herself being a former justice of appeal decided she will follow what the Court says and has agreed that the procedure for swearing in of the President will be put on hold and that the parties will go to the Court [today] at 10 O’clock where the injunction will be sought to be discharged,” he said in a video statement.

Harmon’s reference to Justice Claudette Singh would have shocked observers as he took it upon himself to speak on behalf of the Chair of the body that has independent control of elections without interference by political parties. The GECOM Chair has not been heard from for several days.

In a Facebook post, Gunraj said “My attention was just adverted to a video statement issued by Joseph Harmon, Elections Agent of the APNU-AFC.

“Contained therein are several averments which are factually and/or legally inaccurate and some others just shocking.

“I seek to provide clarity on the following points which deal with GECOM:

“1. There was no meeting of the Commission scheduled for today (yesterday). If there was, I certainly was not invited to any meeting.

“2. The Chief Election Officer does not declare results of the General and Regional Elections. He is required to prepare a report, in manual and electronic form, and present same to the Commission. The Commission declares based on that report.

“3. Mr. Harmon speaks very confidently of the Chairman’s decision and reasons therefor, in relation to awaiting the outcome of court proceedings before the declaration of results. This is indeed shocking because even as a Commissioner, I am not informed of same”.

Harmon yesterday argued that the “order has several defects” and declared the expectation that the order granted on Wednesday to PPP lawyers would be discharged today clearing the way for the President to be sworn in.

“It is our expectation that this matter be treated with some amount of speed because the security situation in the country… is not a good situation and we would like to have this matter dealt with quickly in order for there to be calm, stability and restraint. We have to have the president sworn in quickly [so] that his government will be able to take the necessary steps to guarantee the peace, stability and security of this country,” he said.

Observers note that Harmon could not take it upon himself to sweep aside the genuine concerns that the Region Four result had been rigged and that determination of this would require examination of Statements of Poll in question.

Harmon accused the opposition People’s Progressive Party/Civic (PPP/C) of being the authors of unrest which rocked the country during yesterday.

Noting that children were attacked, Harmon said that Ministers will be visiting the family of those children affected and called on the PPP/C leadership to curb the behaviour of their supporters.

The injunction granted by Justice Navindra Singh was based on an application by Reeaz Holladar.

The injunction was thought to have been served late Wednesday afternoon on GECOM at the Ashmin’s Building, the office of Returning Officer for Region Four Clairmont Mingo.

However, Anil Nandlall who is representing Holladar in the matter said that he had been unable to serve the parties named who are Mingo, Lowenfield or Chair of the Commission Justice Singh.

“They’ve been hiding from me,” he told Stabroek News in an invited comment.

According to Nandlall he has made attempts to have the named defendants served at their offices and in the case of Justice Singh at her home but has not been successful.

Justice Claudette Singh, Lowenfield and Mingo have all been unreachable since Thursday’s controversial declaration of the Region 4 results.

Attempts to reach them by phone or at their offices have failed though Stabroek News understands that the Chair met with representatives of the American, British and Canadian governments as well as the European Union Ambassador.

Members of the Commonwealth Observer Group were also seen entering GECOM’s High Street headquarters during yesterday while the Co-Chair of the Carter Center Election Observer Group Jason Carter stated that members of his team have been in “unofficial” communication with the Chair and CEO.

According to the injunction, the restraint is to remain in force “until and unless” Mingo and Lowenfield comply with and ensure “the compliance of the process set out by the provision, letter and spirit” of Section 84 of the Representation of the People Act.

The section, which specifies the process for the counting of votes, prescribes, among things, that as soon as practicable after the receipt of all the ballot boxes and the envelopes and packets delivered to him in pursuance of Section 83 (10), the Returning Officer shall, in the presence of those legally entitled to be in attendance, ascertain the total votes cast in favour of each list in the district by adding up the votes recorded in favour of the list in accordance with the statements of poll (SoPs) and thereupon publicly declare the votes for each list of candidate.