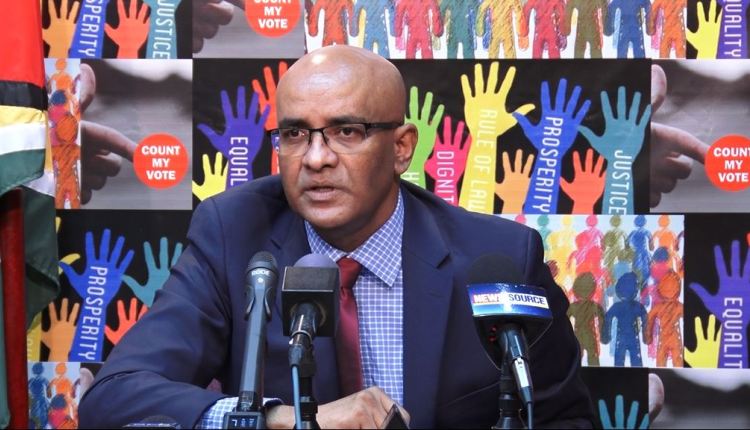 The People’s Progressive Party (PPP) is of the view that the court has no jurisdiction to give legitimacy to what is “plainly illegitimate”, that is, the contentious elections results of Region Four (Demerara-Mahaica) which has been mired by “credible allegations” of fraud.
Following the declaration of the Region Four results on March 13, there have been widespread calls for a recount locally and from the international community.

In fact, the Caribbean Community (Caricom) had brokered a national recount of all the votes cast at the March 2 elections, which was requested by President David Granger and agreed to by Opposition Leader Bharrat Jagdeo. However, this had to be abandoned after an APNU/AFC candidate, Ulita Moore, obtained an injunction from the High Court to block the Guyana Elections Commission (GECOM) from conducting the recount.

The PPP had questioned the court’s jurisdiction to hear the matter but on Friday last, High Court Judge, Justice Franklyn Holder ruled that he had jurisdiction and set today for commencement of the injunction proceedings.
However, the PPP has since appealed Justice Holder’s decision in the Full Court. An application was also filed to stay the injunction proceedings while the appeal is being heard. These matters will come up for hearing at 11:00h today.

According to the PPP in a statement on Sunday, the ultimate objective of any judicial system is to resolve disputes in accordance with the law. It noted that any time a court obstructs, rather than facilitate the resolution of a dispute before it, in any form or fashion, then that court would be departing from its conceptual role as well as its constitutional duty.

“The very survival of Guyana, as a Nation-State, being part of the civilised and free world, is currently before the courts of Guyana… The fair, just and expedient thing for a court to do in these circumstances is to hold its hands, while the constitutional institution discharges its mandate. After all, no court has the jurisdiction to give legitimacy to that which is plainly illegitimate,” the party noted.

The PPP pointed out that the quintessential issue of controversy is whether a recount of the ballots cast should be done. It noted that the law says it is a mandatory facility available to any political party desirous of a recount.
This request for a recount was made by eight of the political parties that contested the election four weeks ago but this was denied for the most dubious reasons by a Returning Officer, Clairmont Mingo, whose credibility, the party said, is “damaged beyond redemption.”

In addition to the political parties, including the caretaker APNU/AFC through its leader, it posited that every major local organisation and every accredited international observer team has called for this recount. The same has been done by almost every diplomatic mission in Guyana and the Governments that they represent, while Caricom has gone as far as brokering an agreement between the President and the Leader of the Opposition to facilitate a recount and in this regard, an aide-memoire was signed by the nation’s two foremost leaders, the PPP stated.

The party went on to outline too that even the GECOM Chairperson, (ret’d) Justice Claudette Singh has given an undertaking to the court, orally and in the form of a sworn affidavit, to conduct this recount. “The Chairperson, a former Appellate Court Judge, has submitted to the court that GECOM has made a decision to conduct this recount; she emphasised that GECOM has the constitutional power and mandate to carry out this recount. She reminded the court that GECOM is an autonomous independent body, exclusively charged with the responsibility to conduct elections. She has pleaded a case for GECOM to be allowed to discharge that mandate and has confirmed that GECOM was in the process of so doing, when injuncted by the court,” the party noted.

The statement added that Justice Singh further implored the court to recognise that GECOM must at all times act with fairness and impartiality, and that it is imperative that the Elections Commission be allowed to do so in a manner that will continue to inspire public confidence in the electoral machinery and the results generated therefrom.

“The world has said to Guyana that no Government, which assumes Office through the current declaration of the Region Four results, would enjoy legitimacy and that a repertoire of sanctions will be unleashed upon Guyana, and personally against those who aided and abetted in the derailing of democracy at these elections. Against this backdrop, why would a court stand in the way of such an imminent resolution of the dispute before it by the authorised constitutional agency?” the party questioned in its missive on Saturday.

Nevertheless, the PPP surmised that in these circumstances, any court that hinders the resolution of this dispute regarding the recount becomes part of the problem and not the solution.