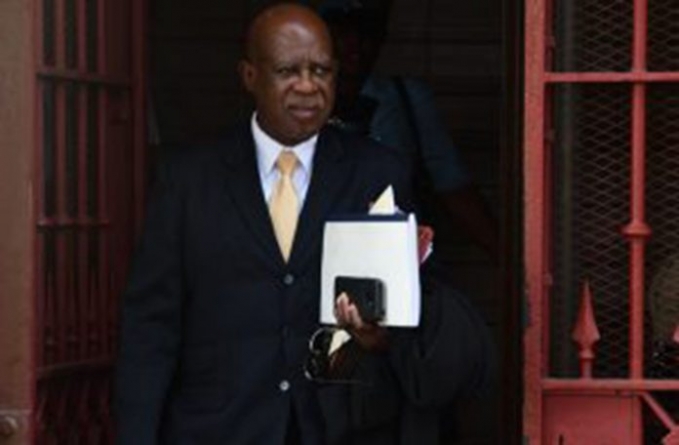 THE actions of the Guyana Elections Commission (GECOM), its Chairman and Chief Elections Officer (CEO) are subject to judicial review on the grounds that they are public functionaries and entities, Attorney-at-Law Mayo Robertson said as he established the Court’s jurisdiction to hear the case brought by the Ulita Moore – a private citizen.
In her Fixed Date Application (FDA) filed on March 17, Moore asked the High Court to rule that the decision by GECOM, its Chairman and CEO, to have the Caribbean Community (CARICOM) supervise a National Recount of all the votes cast at the March 2 Elections is in contravention of the Constitution and the Representation of the People Act. Additionally, Moore wants the Court to prohibit GECOM from conducting, what she considers, an unlawful recount of the votes, and to have the already declared results of the 10 Electoral Districts made final.

However, the issue of the Court’s jurisdiction to adjudicate over the matter arose last Tuesday, by the lawyers representing the Leader of the People’s Progressive Party/Civic (PPP/C) List of Candidates, Bharrat Jagdeo – an added respondent in the matter.
But Robertson, in his written submissions, said that Jagdeo, through his lawyers, inaccurately contends that Section 140 (1) of the Representation of the People Act bars the Court from hearing such an application.

Section 140 (1) states: “Except to the extent that jurisdiction in that behalf has been conferred, and the exercise thereof is required, by the Constitution or any law made under article 163 thereof (which provides for the determination by the Supreme Court of Judicature of questions as to membership of the National Assembly and elections thereto) and save as hereinbefore provided to the contrary, no question whether any function of the Elections Commission or of any of its members has been performed validly or at all shall be enquired into in any court.”

Robertson submitted that Section 140 (1) of the Act cannot operate as an “ouster” of judicial supervision of the Elections Commission’s acts and or omissions.
In support of his arguments, the Attorney cited the fundamental principle outlined by Lord Reid in the case – Anisminic Ltd v Foreign Compensation Commission [1969]. He submitted that Jagdeo, in his submissions, cited a number of authorities which contradict the decision in Anisminic on the treatment of the ouster clauses. He further pointed out that in the case – the AG of Barbados and Ors v Joseph and Boyce, the Caribbean Court of Justice (CCJ) on considering the effect of ouster clauses in the context of constitutional powers, adopted the Anisminic approach.

“The functions and powers of the Elections Commission which are under consideration are rooted in article 162 of the Constitution. The Applicant alleges that the Respondents have acted in excess of that jurisdiction and such actions and/or inactions must be amenable to judicial review. Thus, it is submitted that the case of Anisminic is the only authority on point to address the section 140 (1) ouster clause. Section 140 (1) must therefore be strictly construed so as to preserve the ordinary jurisdiction of this Honourable Court to hear the Fixed Date Application,” Robertson told the High Court.

It was noted too in responding to an application by Aubrey Norton for Writs of Certiorari and Prohibition, Justice Desiree Bernard, in her capacity of Chief Justice, had to consider a Notice of Motion for an order of Certiorari to quash the decision of the Chairman of the Elections Commission to declare Janet Jagan President of the Guyana. On the issue of jurisdiction, Chief Justice Bernard indicated that the Court possessed the jurisdiction to order Certiorari to lie against the decisions of the Elections Commission and its Chairman.
“The Anisminic approach was expressly adopted in Barnwell v Attorney-General and Another (1993) 49 WIR 88 wherein the Court of Appeal of Guyana in considering a Commission’s powers held that although article 226(6) of the Constitution precluded a court from inquiring into whether the commission had validly performed any function vested in it by the Constitution, the court was nevertheless able to inquire into the manner in which the commission set about its decision-making or any procedural impropriety in breach of the Constitution,” Robertson further submitted.

It was noted that under Section 140(1) of the Act the Court has no jurisdiction to determine whether the Elections Commission has performed or discharged its functions and duties validly; the Act does not and cannot oust the Court’s jurisdiction from considering whether the Commission’s decision to not perform its functions was done so validly.
“The Applicant is not complaining about a function of the Elections Commission or any function having been “performed” by its members. On the contrary, the Applicant is complaining about the Elections Commission having failed to perform and/or having omitted to perform, their relevant functions concerning the declaration of the results,” he pointed out.

Noting that the Representation of the People Act clearly outlines the procedures and functions of the Commission and its officers, Mayo pointed out that according to Section 96 (1), the Chief Elections Officer is mandated to calculate the total number of valid votes for each List of Candidates once the Returning Officers have made their declarations. He is then mandated to compile and submit a report to the Elections Commission for their consideration and final declaration.

“In the case at bar, all Returning Officers of the respective electoral districts have made their declarations of the results. the last being the declaration of Electoral District No. 4 which was done on 13 March 2020. Notwithstanding this fact, the Respondents have failed to act in accordance with section 96 and 99 of the Representation of the People Act and formally ascertain the results of the elections and prepare the report to be furnished to the Elections Commission,” he submitted.
This jurisdictional case will be heard in the High Court today before Justice Franklin Holder.