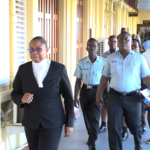 Following hours of legal arguments, Chief Justice Roxane George has set today, March 8, to rule on whether the court has the jurisdiction to issue and uphold an injunction filed against the Guyana Elections Commission (GECOM), barring the organisation from declaring unverified results.

Senior Counsel Neil Boston, who is representing GECOM, Chief Elections Officer Keith Lowenfield and Region Four Returning Officer (RO) Clairmont Mingo, argued in the courtroom on Saturday that this matter cannot be determined at this stage by the High Court.
According to him, the issue must be resolved by way of an election petition, after GECOM completes its final declaration and a President is sworn in. Boston argued that the law does not contemplate an intermediary and a final stage for addressing issues relating to elections and he cited case law from India to bolster his arguments.

However, this point was debunked by Trinidad and Tobago Senior Counsel Douglas Mendes, who appeared on behalf of applicant Reeaz Hollander. According to Mendes, there is no logic in the court intervening to reverse an illegal appointment of a President, when it has an opportunity to prevent the illegality.
In addition, the Senior Counsel noted that all they want is for GECOM to follow the statutory process to tabulate the Region Four votes. According to Mendes, the purpose of their injunction and the entire case is to facilitate, not hinder, the conduct of elections in a lawful manner. He cited several instances where the conduct of GECOM breached the Representation of the People’s Act.

For one, Mendes outlined the statutory process for handling Statements of Poll and the fact that the SOPs are considered conclusive evidence of the election results that must be verified in front of party agents.
He pointed out that Section 84 (1) of the Representation of the People’s Act states: “As soon as practicable after the receipt of all the ballot boxes and the envelopes and packets delivered to him in pursuance of Section 83 (10), the Returning Officer shall, in the presence of such of the persons entitled under Section 86 (1) to be present as attend, ascertain the total votes cast in favour of each list in the district by adding up the votes recorded in favour of the list in accordance with the Statements of Poll and thereupon publicly declare the votes recorded for each list of candidates.”

Mendes pointed out that Section 1 (A) goes on to say that whenever an error is found during verification, the RO must inform the Presiding Officer for the Polling Station. After this is done, the Presiding Officer, in the presence of the original signatories, has to prepare a corrected Statement of Poll and send it back to the Returning Officer.

Statutory process
According to Mendes, discrepancies were found yet this statutory process was not followed by GECOM. He recounted that in the wee hours of March 5, the verification process was instead aborted. Rather than restart the process, Mingo came afterwards and announced he would be making a declaration, even though hundreds of ballot boxes were waiting to be verified.

Boston did not deny that the verification process was aborted. In fact, he sidestepped that issue, seeking to argue before the court that the declaration of Mingo, flawed as it is, was a final one that must now be subject to an election petition if persons want it reversed.

However, Chief Justice George reminded him that as per Mendes’ arguments, a final declaration by the Chief Elections Officer and not the Returning Officer for a single district is considered final.
Mendes himself also emphasised to the court that an election petition deals with disputed results of an election. Their application, he said, deals with the process not being followed and is merely seeking to have GECOM follow the verification process before a declaration, no matter who is determined to be the winner of the elections. He cited a case from the Indian state of Kerala to provide further precedent for his argument.

She eventually set today, at 13:30h, to determine the preliminary issue of jurisdiction. Former Attorney General Anil Nandlall, another lawyer for the applicant, further argued for the court to intervene. He referenced as precedent the previous case of Hamilton vs GECOM that was filed against the then PPP Government, which was heard by then Chief Justice Desiree Bernard.

“The arguments by Mr Boston cannot stand. We argued this identical issue in 2001, when Joe Hamilton, then a Central Executive Member of the PNC at that time, approached the court to get this very order for the verification done. And Chief Justice Bernard ordered the verification.”

On the evening of March 5, Chief Elections Officer, Keith Lowenfield had committed to having the verification process run throughout the night until completion. However, this was never done, which was a clear violation of the law.
The injunction was sought and granted by former Attorney General Anil Nandlall after the Returning Officer for Region Four, Clairmont Mingo attempted to declare unverified results for district four from the General and Regional Elections.

Mingo, however, secretly declared the results – to the surprise of the main political Opposition, smaller political parties, elections observer missions, and the wider international community. Since then, the coalition Government has been inundated by condemnation and warnings from local and abroad, urging the Government not to proceed with the swearing in of President David Granger based on unverified and falsified results.

If the court finds that it has jurisdiction, it will then consider the substantive issue of whether or not the process for tabulating the SOPs by the RO was in accordance with Section 84 (1) above.