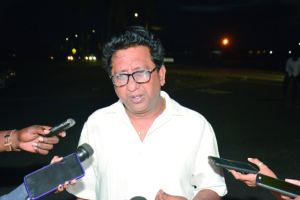 Justice Franklyn Holder will today meet to continue hearing a challenge by A Partnership for National Unity/Alliance For Change (APNU/AFC) candidate Ulita Grace Moore into whether the Guyana Elections Commission (GECOM) should be prevented from doing a recount.

GECOM’s Chairperson, Retired Justice Claudette Singh believes, however, that “if the court grants the reliefs sought, it is contended that the court would be making decisions for GECOM, which is certainly not the lawful role of the court”.
The claims were made by Justice Singh in her affidavit of defence filed in the court this past week.
The litigation brought by Moore in addition to seeking to prevent the recount of the votes cast at the recently-concluded General and Regional Elections also called for a declaration based on the final results.

This based on the declarations of regions made by the regions’ Returning Officers. Several local and international observers, as well as Governments, have since denounced the declarations made by Region Four RO Clairmont Mingo as lacking credibility.
The stakeholders have, in addition to calling for a recount, warned that a new government sworn in on the basis of results that lack credibility and transparency, would not only be not recognised by the international and business community but would face isolation and likely sanctions.

Justice Singh, in her affidavit of defence against the APNU/AFC candidate, noted the applications by several of the contesting parties for recounts were rejected by the RO for Region Four for varying reasons, but “the Commission can intervene to correct this even at this stage”.
According to the former Chief Justice, the Representation of the People Act gives the Commission two options: to either accept the Chief Elections Officer’s report or order a recount of the votes cast.

As such, she contends, “It would be unlawful for the court to direct the Commission on the way forward to complete the process where these issues are still outstanding.”
In urging the court to set aside the APNU/AFC candidate’s request, she noted former Chief Justice Desiree Bernard in a related ruling had said: “In the present volatile situation, which pervades our country, no effort must be snared to assure everyone that the process was fair and impartial. Lingering doubts that hang like a sword of Damocles over the head of the Commission must be removed. Confidence in the electoral process must be restored.”

As such, Justice Singh has since requested that the “Court, and the Commission should be permitted to execute its constitutional role and functions with or without the Caricom Agreement”.
She was referring to the Caricom initiative, which saw Opposition Leader Bharrat Jagdeo and Head of State, President David Granger agreeing to a deal after the latter approached Caricom Chair, Barbadian Prime Minister Mia Motley requesting the regional body’s supervision of a recount.

The Opposition Leader’s Attorney-at-Law, Anil Nandlall expressed optimism at the notion of a recount based on Singh’s submission.
Opposition Leader Jagdeo had successfully applied to the court to halt Mingo’s declaration and has also applied to have the application brought by Moore denied.

Nandlall told media operatives the GECOM Chairperson’s submissions that were tendered to the court illustrated that she has finally assumed her role “and has indicated in those submissions that she is prepared to discharge her duties under the Constitution”.

According to Nandlall, the GECOM Chair in her submissions reiterated that it was that entity that was in charge of the electoral process and Moore’s application should not be granted “because it would force GECOM to make decisions that are not truly GECOM’s decisions”.

Nandlall pointed to the fact that Singh in her submission conceded that while the Caribbean Community was intended to play a role in the recount process the actual decision to facilitate the recount was in fact taken by the Commission.
Singh, in her submissions – a copy of which was seen by Guyana Times – observed that the most important order that was sought by the APNU/AFC candidate was that the recounting of the votes was unconstitutional and that the basis of the contention was that the Commission could not do so on the terms contained in an Aide Memoire signed by the President and Opposition Leader, or at all.