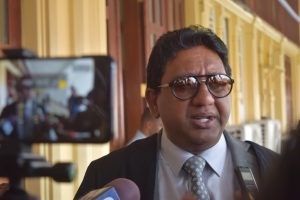 The Court is still in the preliminary stages of hearing application by A Partnership for National Unity + Alliance For Change (APNU+AFC)-aligned Ulita Moore to block the national recount of the ballots cast on March 2, 2020.

So far, an interim injunction has been granted to put the recount process on hold.
During a private hearing of the matter yesterday, Justice Franklyn Holder approved applications by the Liberty and Justice Party (LJP), A New and United Guyana (ANUG) and The New Movement (TNM) to be joined as parties to the proceedings.

Their application was presented by Attorneys –at –law, Timothy Jonas and Senior Counsel Ralph Ramkarran. Jonas spoke with reporters following the closed hearing.
“The Judge at this point has not dealt with the substantive case. He has only done housekeeping. He has made orders as to when we file our affidavits, when we file our defence and so on.”
Attorney- at- law, Anil Nandlall, later told reporters that the court approved the application for Leader of the People Progressive Party Civic PPP/C Bharrat Jagdeo.

He nonetheless noted that a separate application by Reaz Holladar was denied on the premise that Jagdeo’s application covered the same issues that Holladar wanted ventilated in court.
He said that Holladar and Jagdeo filed a fresh action together in which they raised a number of issues connected to the elections results, the denial of the recount, the way the Returning Officer, Clairmont Mingo, conducted the tabulation exercise and the flawed results which flowed from that.

“At this point, the Court is to decide on an application for case by Jagdeo and Holladar to be consolidated and heard at the same time as the matter filed by Moore.”
Parties in the matter are expected to file their defence when the case resumes on Monday.

At the interim, the injunction granted to Moore restrains the Guyana Elections Commission (GECOM) from setting aside or varying the declarations already made by the 10 electoral districts with any other documents or declarations until the hearing and determination of the judicial review of the application.

The interim injunction granted by Supreme Court Judge Holder restrains GECOM from permitting or authorising “any person or persons to any agreement between the President of Guyana and the leader of the Opposition and or any agreement between GECOM and the Caribbean Community or at all, to count or recount any ballots cast by electors at the March 2, 2020, General and Regional Elections until the hearing and determination of the judicial review application.”

“The interim decision also restrains the Chief Elections Officer, Keith Lowenfield, from submitting any report of the total votes cast for each List of Candidates pursuant to Section 96 (1) and (2) of the Representation of the People Act, save and except the votes counted and the information furnished by the Returning Officer under Section 84 (1) of the Representation of the People Act until the hearing and determination of the judicial review application filed herein.”

Attorneys -at -law Mayo Robertson and Roysdale Ford are representing the applicant; respondents to the court matter are GECOM, the Chairman of the Commission and the Chief Elections Officer.
GECOM was, prior to the injunction, scheduled to recount ballots in the elections following an agreement by President David Granger and Opposition Leader Bharrat Jagdeo.

The decision for a recount was made following an intervention by the Chairman of the Caribbean Community (Caricom) and Prime Minister of Barbados Mia Mottley. Prior to the injunction by the Court, Mottley had provided a high-level team to supervise the recount.