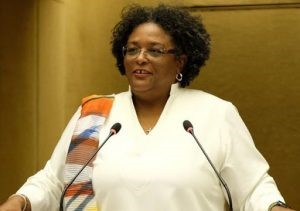 A high-level delegation of regional leaders will be coming to Guyana to supervise the recounting process for the entire country.

Chairperson of the Caribbean Community (Caricom) and Prime Minister of Barbados, Mia Mottley made the announcement on Saturday afternoon, noting that the request was made and agreed to by President David Granger and Opposition Leader Bharrat Jagdeo.

“I have spoken directly to both the President and the Leader of the Opposition and they have both committed to abide by the results of a fair and transparent recount of each and every ballot, as supervised by the Caricom team,” Mottley stated.
Requests for a recount of the votes for Region Four were made by the People’s Progressive Party/Civic (PPP/C) as well as the newer political parties before noon on Saturday morning, in light of concerns of the flawed process embarked upon by the Returning Officer, Clairmont Mingo.

Mingo had declared the discredited results for Region Four (Demerara-Mahaica) at around 23:00h on Friday night, following a process which did not allow political party representatives or observers to scrutinise the Statements of Poll (SoPs) used by the Guyana Elections Commission (GECOM).
Many stakeholders argue that the SoPs used by GECOM were clearly doctored and were not in concord with the SoPs independently collected on Elections Day, March 2.
According to the Caricom Chair, the decision for an independent recounting is a “giant step” in being able to determine the will of the Guyanese people.

“It will also allow the electoral process to regain the confidence of all locally, regionally and internationally,” the Caricom Chair said, adding that there was also an agreement for steps to be taken to secure the integrity of the ballot boxes until the recount takes place.

The international community, including observers and the United States of America, United Kingdom, Canada and the European Union had described the tabulation process for Region Four as one that lacks credibility and transparency.
Meanwhile, the high-level team will be Chaired by Francine Baron, former Attorney General and Foreign Minister and comprise Anthony Boatswain, former Minister of Finance of Grenada and Cynthia Barrow-Giles, Senior Lecturer in Department of Government of UWI. They will also be accompanied by the two Chief Election Officers from Barbados and Trinidad and Tobago.

The recount will commence once the Caricom team arrives in Guyana, Mottley said, noting that “all efforts” are being made to have the delegation in Guyana.

Countrywide recount
In a subsequent statement, Caricom Secretary General Irwin LaRocque clarified that “for the avoidance of doubt, Granger and Bharrat Jagdeo had agreed to a recount of all regions and not just Region Four.
Opposition Leader Bharrat Jagdeo, who is also General Secretary of the People’s Progressive Party/Civic (PPP/C), explained that he has no objections to a national recount.

In a comment to the media, Jagdeo explained that the issue of a recount for Region Four was brought up at a meeting between himself, Granger and Caricom Heads earlier in the week.
During that meeting, Jagdeo said the President raised concerns he had in two regions.
“I informed the meeting that although the statutory deadline for requesting the recount in some of the regions had passed, the PPP/C would support a request for a recount in any region, providing that the ballots are secured,” Jagdeo explained.
He noted too that the PPP/C had requested, at that meeting, that all the containers be centralised to allow for a watch by all the political parties, GECOM and the election observer missions.
“I reiterate that the PPP/C has no objection to a recount in any of the 10 Regions, or all for that matter, as a means of definitively settling the issues surrounding the March 2, 2020 General and Regional Elections,” Jagdeo posited.

Court case
Prior to the announcement by Caricom, the PPP/C had approached the court to secure its request for a recount of the votes for Region Four.
The matter was held at the Diamond/Golden Grove Magistrate’s Court, before Chief Justice (ag) Roxane George as the High Court in Georgetown was being fumigated.

The PPP/C had feared GECOM would deny its requests for a recount, and as such, approached the court on that basis.
However, during the proceedings, the Caricom Chair made her statement, which was then brought to the attention of the CJ.
Efforts were then made to have the statement authenticated, after which, the GECOM Chair, Justice Claudette Singh was asked to address the court.

According to PPP/C attorney, Anil Nandlall, Justice Singh gave a commitment to facilitate the recount.
Nandlall told reporters he is satisfied with that outcome.
“This is a political situation. While we are trying to get it legally addressed…one can’t turn a blind eye to the political realities that are operating in the circumstances here. And if the politicians in their wisdom have come to a political solution, then it is incumbent upon GECOM to facilitate and not frustrate that process, of course, within the confines of the law,” he explained.