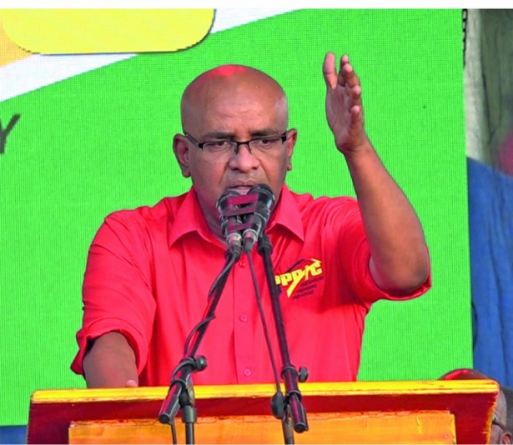 People’s Progressive Party (PPP) General Secretary Bharrat Jagdeo has vowed that the massive tracts of land given away in the waning days of the A Partnership for National Unity/Alliance For Change (APNU/AFC) Administration, will be reversed should his party gain power in elections on Monday.

Jagdeo made this declaration during the final PPP rally before Monday’s polls, at the Lusignan tarmac, East Coast Demerara on Saturday that saw a massive turnout of thousands of party supporters. According to him, the APNU/AFC’s five years in Government has been dogged by scandal after scandal.
The latest has seen party financier Lloyd Singh being given 164,000 acres of prime State forest land along the Berbice River. This has loggers up in arms since they contend favouritism was shown to Singh, when they would have unsuccessfully applied for logging concessions.

Jagdeo vowed that this land would be taken back and given to loggers who deserve it. He referred to a protest mounted last year by loggers in Ituni who had complained that their permits to cut logs had dried up and as a consequence, they could not provide for their families.
“Because it’s corrupt. And guess who is going to get it? Because this is in the Berbice River, the same people from Linden, Ituni, Kwakwani, the loggers who needed that land to feed their families.”
“You saw a protest with one man from Ituni saying, “we’re starving”. Since this Government took office, all the jobs on that corridor have been lost. So, I want to say to the people in Region 10, you’re going to get the land.