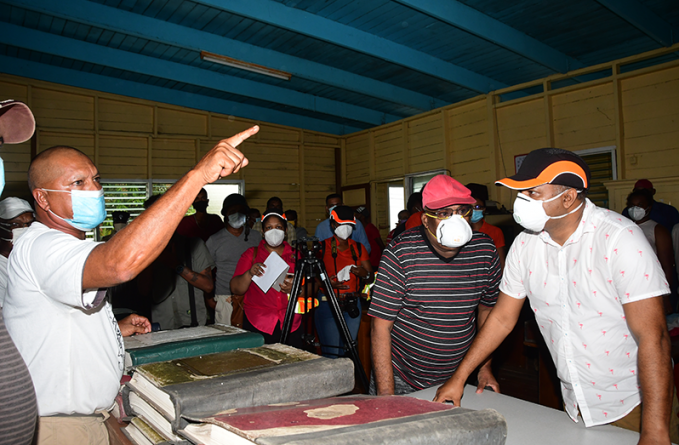 Residents of Leguan should have been the beneficiaries of a proper, rehabilitated stelling, almost one year ago, but, not only is the rehabilitation project incomplete, an audit has uncovered that the contractor undertaking the project, S. Maraj Contracting Services, received $199 million for work valued at $50 million.

The former A Partnership for National Unity and Alliance For Change (APNU+AFC) Government, in August 2018, had awarded a contract valued $413 million to S. Maraj Contracting Services for the rehabilitation of the dilapidated Leguan Stelling
Although the contract was awarded in August 2018, it was reported that, due to a number of hiccups, the contractor recommenced work only in October 2019.

“To date, the contractor has been paid $199 million of taxpayers’ money… the Audit Office of Guyana is looking at the project and examining what is going on… but, from what I was told, work only to the tune of about $50 million has been measured,” said Minister of Public Works, Juan Edghill, during an engagement with residents of Leguan, following an inspection of the stelling, on Friday.

Based on what was revealed by the audit and what was seen, the minister said the contractor got more money than the work done. And, while there are reasons for this, Edghill said Auditor General, Deodat Sharma, will have to deal with those.

“There is no impediment, financially, on the part of the contractor from preventing the work from going ahead. He has received $199 million and work completed is just over $50 million… what has to be done must be expedited because the issue is not money, the issue is management,” the minister lamented.

The contractor was asked if he will continue the project to which he responded in the affirmative, but Minister Edghill made it clear that the contractor will be closely monitored, and he will have to prove to the new People’s Progressive Party/Civic (PPP/C) administration that his culture of work is different from what obtained before.

WILL NOT TOLERATE EXCUSES
The minister assured residents that he will not tolerate excuses or ‘lackadaisical’ behaviour because the stelling is an asset to the people of Leguan.
“The main purpose of being here is to make sure we continue the process of remedying the situation and ensuring that residents benefit from the rehabilitated stelling, that will enhance your own safety and wellbeing and ensure that you have a place where you could move to and from, and do so in a manner that is befitting of what you are entitled to,” said Minister Edghill.

The contract signed in August 2018, had established a timeframe of six months, but is now the end of August 2020 and the project is yet to be completed. Work on the stelling recommenced only two weeks ago after being stalled for months.

It is evident that the project was badly managed and administered by the past administration, said Edghill, adding that there was untimely decision-making and lack of settlement on matters of dispute, while residents were suffering.

Residents, while wanting an expeditious completion of the project, had raised concerns about old materials being used on the stelling. But, the minister said the contract signed by the past administration, stipulated that materials, which could be salvaged and re-used, should be salvaged and re-used.
Minister Edghill has since assured residents that he will engage engineers of his ministry on the materials being used on the stelling.

“Also, I am not satisfied with the way the stelling is being kept and I want to see it being tidied up so that people who have to use it, they must be able to do so without endangering their lives or being injured in any way,” said the minister, urging the contractor to utilise safety signs.

Residents will also have an opportunity to be “overseers” of the project, since Minister Edghill ordered that the ‘unpriced’ Bill of Quantities be placed in a public place so that people could examine it and ensure that everything being done is done in accordance with the contract.
“We want no excuses… this project was to be completed in six months, and since we restarted work just 10-11 days ago, I expect that, in a matter of months, it will be completed… this is not going over to the years, I could live with the original six months, but it cannot go on and on,” said the minister.

As it is now, the contractor is required to submit a revised work plan which will include the date of completion, among other things.
Minister within the Ministry of Public Works, Deodat Indar, who also inspected the stelling, said the issue will have to be remedied within the context of the contract so that the process can move forward.

“The stelling must be finished… during the political process I visited and I promised when we get into government it will be fixed, so that promise still stands,” said Minister Indar.

The absence of a proper stelling has stymied economic activities on the island. Residents, particularly businessmen have been unable to take or bring their usual ‘load’.

One businessman, Shalim Haniff, said the ramp used to accommodate four to seven tonnes, now they can only transport about three tonnes at a time. This, he said, also depends on the tide and other factors.

“One time the thing even break away with me and it cost me $500,000… the situation is critical and it has been so since 2018,” Haniff lamented.
Similar concerns were echoed by other residents but they are all hoping for a speedy and proper completion of the stelling.