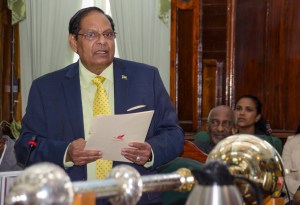 Guyana as a nation has been through numerous changes in its political landscape in recent times There is the belief that the antedote for Guyana‚Äòs problems is not electoral votes but a constitutional reform plan.

Guyana‚Äôs Prime Minister Moses V. Nagamootoo, while performing the role of President in October 24, 2017, expressed the view that the United Nations and its sister organisations were working with the Guyana Government to aid in constitutional reform .
Guyana‚Äôs constitution is an arrangement of fundamental principles that governs the state. ¬ÝConstitutional reform seeks to modify some fundamental structures of these principles. The 1980 Constitution was reformed and the changes are enshrined in the revised supreme law in 2001.

The administration‚Äôs drive for constitutional reform began in June 2017 when Prime Minister Nagamootoo read the Constitutional Reform Consultative Commission Bill 2017 on July 27 for the first time in the National Assembly.

There must be inclusivity of all nationalities and full support of all ethnicities of Guyana‚Äôs political situation will see a solution, Prime Minister Nagamootoo posited recently.
In 2019 there was a conservative effort by the coalition administration to educate the populace about constitutional reform, thus making citizens aware of their rights and freedoms.

The exercise was also done to make citizens, especially young people, more responsible while exercising their rights and freedoms.

Presentation of the Constitutional Reform Bill to the National Assembly back in July of 2017, paved the way for a successful constitutional reform process, and thus meaningful dialogue, negotiations and compromise with the opposition and with citizens.

Constitutions provide the overarching legal framework which sets out the basis of the social contract between a state and its people affecting all aspects of policy and society. They establish the institutions of government and their powers vis-√Ý-vis each other and with and between the people.

Constitutions also provide the foundations on which governance and peace are built. To this end, it is essential that they belong to and have legitimacy and buy-in of all segments of society. Historically, constitutions were often drafted behind closed doors on the basis of negotiations between powerbrokers.¬Ý However, in recent decades, there has been an important shift towards supporting participatory, inclusive and transparent constitutional-reform processes that build consensus around the shared vision to be enshrined in the national constitution.