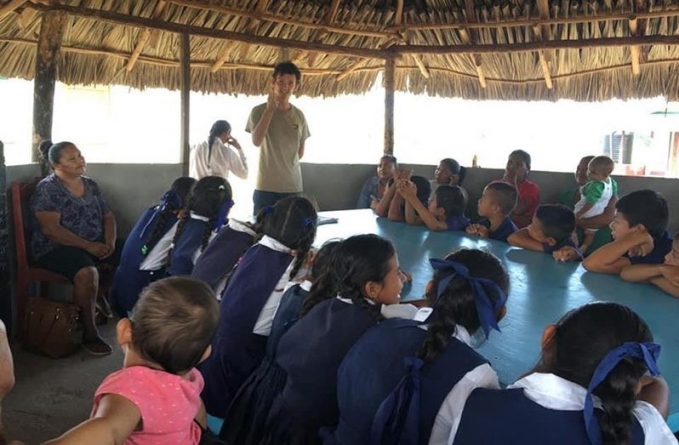 THE South Rupununi Conservation Society (SRCS) believes that it is necessary for all Guyanese, especially children, to be taught the importance of the environment and how to protect and sustain it. “Environmental Education is so important, especially in Guyana where we have such rich and pristine biodiversity,” said Neal Millar, Programme Coordinator of the SRCS.
Armed with the belief that good practices are best inculcated young, the Non-Governmental Organisation plans to develop a more holistic partnership with the Ministry of Education.

“We would like to find a way to see our environmental education curriculum, which we hope to implement to 16 schools in the Rupununi and over 1500 students by 2023, into the national (school) curriculum, Millar said during an interview with this newspaper. He noted that the SRCS is currently delivering its programmes to a few schools in the South Rupununi district. “We implement it in Kumu Primary, Shulinab Primary, Sand Creek Secondary and Shea Primary,” Millar noted.

The SRCS recently shot to international recognition, having been able to successfully establish Guyana’s first Important Bird and Biodiversity Area (IBBA). The area was designated a “safe zone” for the endangered Red Siskin. Other groups across Guyana are also working to address the threat of extinction to other species of birds. Millar has confirmed that Guyana’s “bird-caging” traditions have had some effects on the sustainability of Guyana’s impressive bird population. Even though the bird-caging and trading traditions are not illegal, it is frowned upon by almost all environmentalists and conservationists. While the caging and trading of birds is a hobby for some, it is even more important to many others.

“Personally, SRCS believes that it can continue, as we know people depend on it for their livelihoods; although, we wish it would stop as we don’t think any wildlife should be caged,” Millar said. The programme coordinator believes that many persons can work to create alternative job opportunities, instead of relying on the bird industry. For those who refuse to do so, Millar is encouraging them to abide by the regulations and guidelines established in the 2016 Guyana Wildlife Act.

“It is not illegal to trade the birds. However, anyone who wishes to trap and trade these birds must secure a licence from the Guyana Wildlife Commission,” Millar said.
He is encouraging Guyanese to “ensure that you source your birds from someone who has a permit to trade and also ensure that the bird was not trapped during the closed season.”
Additionally, Millar said that persons are allowed to trap only certain species of birds during “open seasons which are designed to ensure that the populations can keep reproduced and remain at a healthy population.”

“For many of the species that are caught for bird-caging such as the Towa Towa (Chestnut bellied seed finch), there are rules included in the 2016 Guyana Wildlife Act to protect them,” Millar said. He lamented the fact that many of the regulations set out in the Act are not being properly observed, especially in the South Rupununi area.
“As such, we are seeing a serious decline in the number of the species and many community members frequently tell us that they are noticing the decline over the years,” Millar noted.
“Recently, we have intercepted more and more instances of the Red Siskin being trapped. This is different as it is illegal to do this,” he posited.

With the IBBA being successfully established, the SRCS plans to work with local communities in the South Rupununi to first assess wildlife populations and then protect those that are threatened. The organisation is also pursuing the possibility of having rangers deputised, “so that they can help enforce the laws of the 2016 Guyana Wildlife Act.” Millar pointed out that “this creates jobs and will always protect our precious wildlife.” Nonetheless, in light of its IBA success, the SRCS has plans to travel to other areas of Guyana to share the knowledge and experience gained from the IBBA process.

“This is to help safeguard our beautiful country…ideally, we would want to encourage persons not keep birds at all. Instead, come visit them in their natural habitat where they are wild and free,” Millar advised. The Executive Committee of the SRCS comprises its President Leroy Ignacio; Vice President Angelbert Johnny; Treasurer Erin Earl; Secretary Kimmy Spencer; and Assistant Secretary-Treasurer Elian Gray.