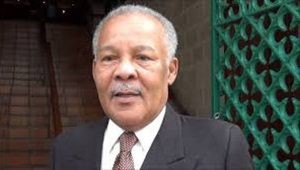 The Commonwealth Election Observer group has released its preliminary findings of the Guyana 2020 Regional and General Elections.
During a press briefing at the Cara Lodge Hotel, yesterday, Head of the Commonwealth Team and former Prime Minister of Barbados Owen Arthur noted a significant increase in the number of political parties and presidential candidates contesting the elections, although the campaign was dominated by APNU+AFC and PPP/C.

“These were highly contested elections,” Arthur said.
The Observer Group Head noted that whilst the environment was tense and divisive, overall, fundamental freedoms of association, expression, assembly and movement were generally respected.
However, the former Barbadian PM noted that a key issue repeatedly raised in our interactions was the urgent need for constitutional and electoral reform to address what stakeholders view as a complex and multi-faceted polarisation of the nation.

“These divisions are reflected in the composition, structure and operations of the Guyana Elections Commission (GECOM) itself.
“It is essential that electoral processes be fully inclusive of different political stakeholders and minority groups.”
The Commonwealth Mission was not the only observer team that recommended reform of the composition of GECOM.
The team of observers from Organization of American States, (OAS) also made similar recommendations.
The OAS noted the polarisation among members of GECOM and the challenges it creates in arriving at consensus on most issues. The division appears to exert undue pressure on the Chairperson and the use of his/her casting vote to resolve decisions before the Commission.

The mission therefore recommended that Guyana engages in a multi-stakeholder discussion on the structure of the electoral authority in order to enhance the deliberative nature and decision -making process of the commission.
Meanwhile, the Commonwealth observer team made recommendations for a comprehensive reform of the voter registration system, including legislative reform, is required.
The team noted that the Official List of Electors, containing 660,998 names, is clearly high in relation to the estimated 785,000 population of Guyana.

The Commonwealth observers pointed out, too, that the attempts by GECOM to create a new National Register of Registrants Database between July and August 2019 were not completed.
Additionally the group expressed concerns over delays in the determination of election petitions by the Court.
“Election petitions are handled by the High Court, and must be filed within 28 days. We were informed, for example, that an election petition filed by the PPP/C following the 2015 election is still pending before the High Court.”
The need to revise, update and implement campaign finance laws and regulations was highlighted by the Commonwealth team.

“The current limit on expenses ranges from $25,000 to $50,000 or the equivalent of US$125 or US$250.
“This is clearly outdated. Current legislation neither makes provision for disclosure of sources of contributions, nor provides effective enforcement mechanisms. Further, no guidance on the use of state resources exists in legislation.”
The team noted too that the Secretariat staff witnessed early voting of members of the disciplined forces on February 21, 2020.

“This exercise was undertaken in an orderly manner, with most procedures followed. We commend the Guyana Elections Commission for the facility of early voting, which enfranchises those who would be on election-related duty on the main polling day