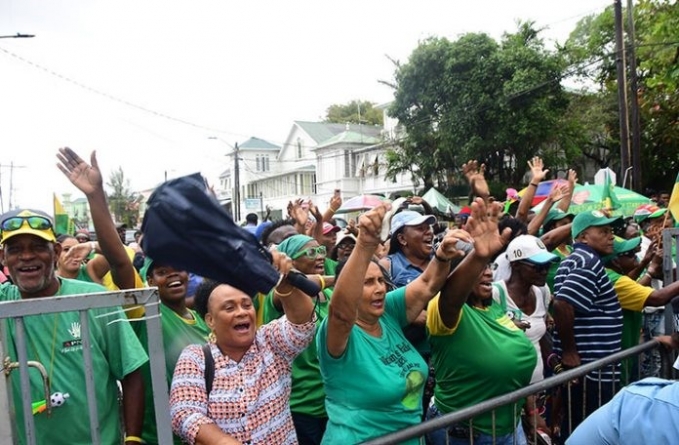 The total results declared by Returning Officers (ROs) for all 10 Administrative Regions in the Regional Elections show that the coalition government has taken the lead by over 7,600 votes. With Region Four (Demerara-Mahaica) being the last set of results to be declared, APNU+AFC jumps ahead with 237,140 votes to the PPP’s 229,450.

The long-awaited results for the single outstanding Region was declared on Thursday, indicating that the People’s Progressive Party/Civic (PPP/C) gained 77,258 votes in Region Four, while the A Partnership For National Unity + Alliance For Change (APNU+AFC) gained 136,335. This represents a 59,097 lead in the Region, which is known to be an APNU+AFC stronghold. Regional votes oftentimes being almost identical to votes in the General Elections, could very well mean that the coalition government comes out as the victor in the 2020 General and Regional Elections.

The process was then taken up by a GECOM Clerk, but disagreement ensued when a summarised spreadsheet was used and the numbers did not match. There were attempts to complete the process that night, but these failed. On Thursday, with plans to recommence the verification process at 09:00hrs, leaders, representatives and agents of all political parties, along with members of Elections Observer Missions (EOMs) and members of the diplomatic corps gathered at GECOM’s tabulation center on High and Hadfield Streets.

But for reasons unknown, the verification process did not recommence, either at the said time or later, whereby the SOPs for Region Four were being verified “statement- to-statement”. Later on Thursday afternoon, the media got word that Mingo had recovered and returned to the GECOM tabulation center, and at around 17:30hrs, GECOM’s Public Relations Officer (PRO) Yolanda Ward released the declared General and Regional results for Region Four signed by the necessary signatories.

SHOUTED DOWN
When Mingo initially tried to declare the results to those within the Center, shouts erupted from Party affiliates present over the RO’s voice, but this did not stop him from going ahead with what he set out to do. Sometime after, the results were made known to the media. The General Elections results for Region Four does not differ much from that of the Regional, as it shows that the PPP has obtained 77,329 votes, as opposed to the APNU+AFC’s 136,458. It represents a 59,129 lead for the coalition government.

Before the results were declared, Leader of the Opposition Bharrat Jagdeo had on one occasion shared with the media his party’s own tabulations of the votes cast in Region Four, and according to those calculations, the PPP/C had secured 80,344 votes and the APNU+AFC 114,345. In other words, the Opposition Leader gave his party 3,086 extra votes and the APNU+AFC 21,990 fewer than what was eventually declared.

And whereas the results declared by GECOM showed Change Guyana (CG) receiving 913 votes; the Liberty and Justice Party (LJP) 757 votes; the Organisation for the Victory of the People (OVP) 117; the People’s Republic Party (PRP) 383; and the United Republican Party (URP) 91, Jagdeo’s tabulation was far off the mark.

He gave five more votes to the A New and United Guyana (ANUG); five less to Change Guyana; 113 more to the LJP; 226 more to the PRP; eight less to the TCI, which did not contest the Regional Elections; seven more to TNM; and nine extra to the URP. Following the declaration of the SOPs and much commotion at the Center, an emotional Jagdeo exited the building, sticking to his previously announced tabulations. “This is the manufactured figure now that went out on the declaration by Mingo, fraudulent,” he said. “This is totally fake; a fraudulent declaration by 22,000 votes added out of nowhere.”
From then to now, the Guyana Chronicle has not been able to reconnect to the site on which the PPP once portrayed the results of their own tabulation. And now that the declaration has been made, Jagdeo says that the PPP/C will be requesting a recount.
Meanwhile, head of Electoral Observers Missions (EOMs) have agreed that GECOM should refer to the previous “statement-to- statement” verification process, which came about as a result of discrepancies with the introduction of a spreadsheet, before they recognised the declared results of the Region as valid. Chair of The Carter Center Mission to Guyana, Jason Carter said: “The fact that there was no transparency of the results that were ultimately announced today means that those results lack credibility.”

Carter, who is also Chairperson of the Carter Center’s Board of Trustees and grandson of former US President, Jimmy Carter, said that one way of fixing the problem is by granting the recount requested by the PPP/C. “I see both sides have claimed that they think they’ve won,” he said, adding: “If that’s true, then what they want is to win in a credible, transparent way and so urge GECOM, and we urge the political parties and the people of Guyana to come together and pay close attention to how these results are going to be verified.”

On Thursday evening, hundreds of supporters, elated with the declared results, gathered at the APNU+AFC’s headquarters on Lamaha Street in Georgetown awaiting a brief address from President David Granger, who was also at the location. There, Director-General of the Ministry of the Presidency Joseph Harmon made it clear to supporters that the party has not made a declaration because, by law, this is the sole responsibility of the Elections Commission.

When the President did speak, he thanked Region Four in particular for its overwhelming support, based on the declared results, and assured them that his party is committed to making life better for all Guyanese, but urged them to celebrate, but to do so in moderation. “Don’t attack anybody,” he cautioned. “Let us go about our business, and when the sun rises; when the President is sworn in again, let us go forward in dignity. We are Guyanese, and we are building a country for our future; for our children. Thank you, thank you, thank you!”