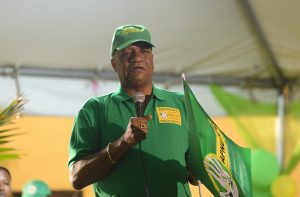 The future leadership of Guyana depends on the transferring of knowledge and experiences from leaders who are competent and unstained by a trail of corruption to the younger generation.

In his opening remarks, Nagamootoo said that while the People’s Progressive Party/Civic (PPP/C) has labelled the coalition as filled with “old people”, it is this group of leaders that is best equipped to pass the baton of leadership on to the younger generation.

“We recognize the importance of young people and even though some of us may have enjoyed the nectar of age we see it as a responsibility to nurture the new generation to take from us the baton of leadership,” Nagamootoo said.

When compared to the PPP/C, he stated that the party is now being led by a man who was forced to “manufacture [his] qualifications for recognition and worth.”

He told the audience that when it comes to their future and the future management of Guyana’s oil revenues, the baton must not be passed on to people who have a bad history of managing the country.

Thinking back to his 15 years with the PPP/C, the Prime Minister said he learnt that there is a mindset of “authoritarianism” wherein lies the habit of handpicking leaders and the victimisation of anyone who disagrees.

Speaking to the Lists of Candidates recently presented on Nomination Day, he stated: “We have people who are genuinely competent to take their seats in the National Assembly to be parliamentarians and ministers of the government.”

The Prime Minister also highlighted Guyana’s recent assumption of the Chairmanship of the Group of 77 (G77) and China which sees the country representing the interest of 135 countries.

He noted that the high responsibility bestowed on Guyana was made possible due to the recent boosting of the country’s image as a result of improved leadership.

He stated to the applause of the audience: “We have become recognised in the world because of one man who went to the United Nations and he declared that Guyana’s agenda is to save the people of the world; his name is David Arthur Granger.”

With the move, Nagamootoo explained that Guyana is better positioned to fight climate change, build a ‘Green State’ and take its place as the green lungs of the world.

Added to this, with Guyana already in the process of lifting its first million barrels of crude, Nagamootoo stressed that the country is heading into the big league and requires great leadership.

Meanwhile, in his address, Director General at the Ministry of the Presidency, Joseph Harmon, said that the movement called the APNU+AFC is catching on like wildfire in Guyana.

He said that the coalition is aware that there were not placed in government to act selfishly but in the interest of the people.

He explained that this is why the Administration cannot accept Charrandass Persaud’s actions as they were in his own interest when his seat in the National Assembly represented some 6,000 votes for a people in favour of a coalition.

Moving forward, he assured the audience that the government is interested only in unity and moving the country forward with the vision of the people.

“When we say we are moving forward, we are moving all of Guyana; we’re not leaving back anybody and this movement started in 2015,” he said. “You were responsible for that change and we want to thank you for that,” Harmon told the residents.

He said that while the government has done much in the community with regards to utility improvement, crime reduction and road construction, more needs to be done and will be done under the APNU+AFC.

The Director-General noted that one of the main developments he wants to see is the construction of a state-of-the-art school for the benefit of the many youths as a part of the community.

Harmon also urged supporters to operate in accordance with established guidelines on elections day while reminding them that their votes are crucial to ensuring that the APNU+AFC wins by a landslide come March 2020.

“Parfaite Harmonie we need 100 per cent from you that is how we’re going to make it! Can we do it?” he questioned receiving the resounding affirmation of the audience.

Speaking to the people from her Region, People’s National Congress/Reform (PNC/R) Regional Chairperson, Thandi McAllister said that citizens have a serious decision to make, one which could change their lives for the better or worse.

“This is a decision between the David Arthur Granger-led coalition and 19 charges,” she said.

“I want you to remember that come March 2nd 2020 we must say resoundingly ‘never again PPP/C’. Never again to a group of people that have denied this country, the children of this country, a good education because they have no plan…leaving a whole generation behind with a lack of skills and the qualifications necessary for a good life,” McAllister further told the residents.

She set out to take the audience down memory lane as she reminded them that while the PPP/C claimed that it spent $728M on the construction of the Kato Secondary, it was under the current Administration that it was found to be structurally defective and reconstructed in modern fashion.

McAllister also pointed the to the PPP/C’s $10,000 cash grant for school children, which she said was only implemented leading up to the 2015 elections period.

The Regional Chairperson also pointed out that free education was accessible at the University of Guyana (UG) up until 1994 when the PPP/C did away with it but the coalition government has a plan to reverse this.

She said that never again will Guyana be branded as corrupted or be placed on a blacklist while politicians squander the country’s resources for their personal use.

To achieve such, McAllister urged citizens to ensure that their names and the names of their family and friends are on the Voters’ List.

Meanwhile, candidate on the coalition’s List of Geographical Candidates, Pandit Suraj Narine told the crowd that he was energized and motivated by their presence.

He said that while the Opposition aims to create political turmoil and destabilise the country, the APNU+AFC still rises and will move Guyana forward with credible, professional leaders.

Narine said that in 1992 the PPP/C succeeded in influencing him while he was politically uneducated with “whispers” about who was to be blamed for the state of the country but, over the years, he has “grown to know who are the culprits”.

“They can no long appear in front of me and sell their garbage,” Narine said “I’ll send them to Puran and Cevons!”

He told the gathering that what the government has accomplished in just four and a half years gives Guyanese new hope that they will no longer be voting with emotion but for a government which truly has their interests at heart.

He urged supporters to vote, on Elections Day, for the clean hand with the key which will open prosperity for a good life for all Guyanese.