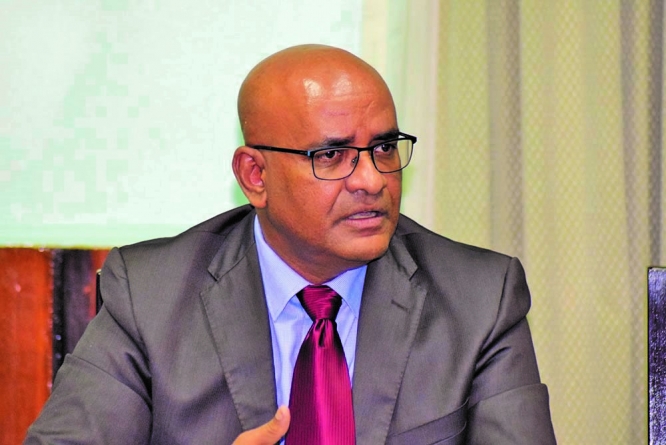 Vice President, Bharrat Jagdeo, has accused the former APNU+AFC administration of “defending the illegalities” surrounding the award of prime state lands situated at Ogle, East Coast Demerara.
His comments came after the now Opposition, encouraged the recipients not to return the lands as they were “lawfully obtained.”

“The APNU+AFC Coalition called on those persons who have purchased or leased lands and other properties to not return them, since they were obtained legally,” the Opposition had said in its statement.
Further, it said, “The APNU+AFC Coalition calls on the PPP regime to desist from dispossessing Guyanese of their legally acquired property and to recognize that they are setting a bad example. The PPP must recognize that all Guyanese have a right to share in our national patrimony and to note that the APNU+AFC Coalition will support the legal actions of those owners, so that the courts can reaffirm their legal right to their property.”

The party’s comments were also bolstered by the utterances of Aubrey Norton, a People’s National Congress Reform (PNCR) executive, who told the media at a press briefing that, “Once the beneficiaries still have legal documents for the land, I believe they should keep the land.”
But with clear evidence that the lands were illegally obtained, the VP insisted that the opposition party, part of the A Partnership For National Unity (APNU), seeks to defend the non-transparent awards of the lands instead of condemning it.

“Here is a party saying that a person can get a piece of land, which, based on their evaluation, is worth one billion dollars, vested already, have the title for it, and that person must not give up the land, that’s their party’s position now, they are defending the illegalities,” Jagdeo said in a recent interview.
He explained that there are “clear cases” of lands, worth billions being transferred but not a single cent being paid to the state – such actions are criminal.
“This is precisely what APNU is defending, their position should be where there is illegality, people have to face the music,” he said.

He even pointed to the Peter’s Hall land scandal involving attorney-at-law James Bond, where he received a US$1 million payment for the sale of state lands.
Added to that, the VP stated that no authority was granted to former Commissioner of the Guyana Lands and Surveys Commission, Trevor Benn, to sell state lands.
“We looked at the instrument, you have to publish it in the Gazette, he never had the right to dispose of lands, just to lease the land, he is exercising that responsibility on behalf of the President, the President delegated the responsibility, ‘cause it’s the Minister who is the President under the Act that has that responsibility.”
According to Jagdeo, more evidence will emerge in the coming days outlining further deals as the investigations continue.

These are prime lands that are located near a major planned highway that would link the East Coast and East Bank transportation network. The almost 1,000 acres of prime lands opened by NICIL for commercial development are said to be worth billions of dollars.
Although the lands were vested to the companies, no payment was made to the government, giving a clear indication that the state lands were merely given away.
Public accountability advocates had argued that the Coalition government, being in caretaker mode, should not be involved in such deals.
Not to mention, the country was embroiled in the widely publicized electoral impasse.