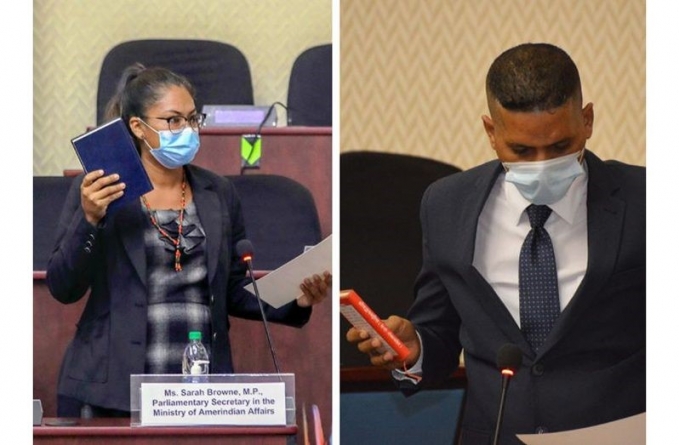 A Partnership for National Unity + Alliance For Change (APNU+AFC) has approached the High Court seeking a declaration to have Parliamentary Secretaries, Sarah Browne and Vikash Ramkissoon removed from the National Assembly.
A fixed date application filed in the name of Opposition Chief Whip Christopher Jones claims that the two were illegally appointed.
Jones is being represented by Attorneys-at-law Senior Counsel Roysdale Ford, Mayo Robertson, Raphael Trotman, Geeta Chandan-Edmond, Amanza Walton-Desir, Olayne Joseph and Darren Wade Browne, Ramkissoon, Attorney General and Minster of Legal Affairs, Anil Nandlall and Speaker of the National Assembly, Manzoor Nadir are all listed as respondents.

To back up his grounds for the application, Jones listed Articles 103 (3), and 186 of the Constitution which states “Not more than four Ministers and two Parliamentary Secretaries shall be appointed by the President from among persons who are qualified to be elected as member of the National Assembly” and “Parliamentary Secretaries may be appointed from among persons who are elected members of the National Assembly or are qualified to be elected as such members.”
Earlier this month the Coalition won a similar case in the Demerara High Court. The acting Chief Justice, Roxane George, ruled that the appointment of Tourism, Industry and Commerce Minister, Oneidge Walrond, was unlawful.

The Chief Justice also granted another declaration stating that Walrond was not a lawful member of the 12th Parliament of Guyana when she was sworn in on September 1, 2020. In November, Jones had approached the High Court seeking a declaration to have Walrond moved from her seat in the National Assembly, which they claimed she was illegally occupying. During the commencement of the virtual hearing held on December 10, Attorney-General Nandlall conceded that government recognised that Walrond’s appointment might have collided with the Constitution of Guyana, since she was still a citizen of the United States of America when she took the oath to become a minister and parliamentarian.