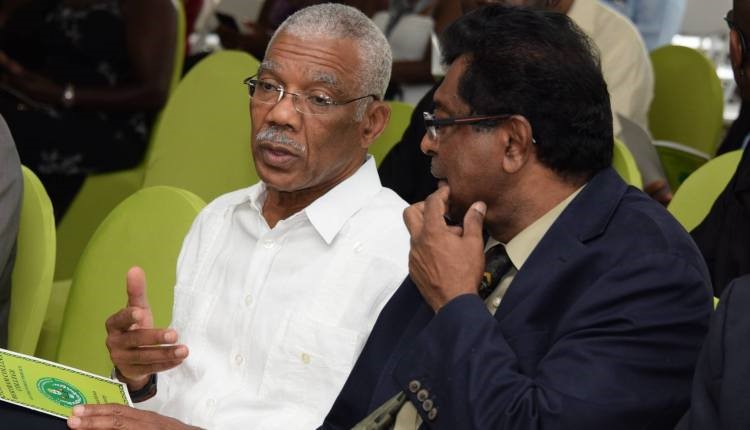 STATEMENT BY THE APNU+AFC COALITION ON THE LATEST ATTEMPT BY THE PPP/C TO DISRUPT THE TABULATION OF SOPs AND DECLARATION OF THE REGION FOUR RESULTS:

The APNU+AFC coalition repudiates the latest attempt by the PPP/C to frustrate the will of the people and further condemns its contemptuous behaviour in defying the orders of the Chief Justice (Acting) in her ruling yesterday, by forcing another halt to the tabulation of the District 4 Statements of Poll.

Specifically, the Chief Justice ordered that it was “the decision of the Returning Officer to decide the best method of tabulating the Statements of Polls” and that “everybody else who thinks they can have an input, and a say, it is not their statutory duty.” The continuing attempt to disrupt by the PPP/C is, therefore, a blatant attempt to interfere, contrary to the ruling and expressed order of the court.

The APNU+AFC calls on GECOM to ensure the resumption of the tabulation and that it proceeds without hindrance, as no one Guyanese is above the law and all subject to the constitution and laws of Guyana.

The coalition has scrupulously adhered to the provisions of the Representation of the People Act and has remained in quiet obedience to the dictates of the Commission and Court in this matter, which has gone on for ten days. Our obedience should not, however, be mistaken for softness or a lack of resolve to ensure that the will of the people prevails and is not outshouted by any special interest group in our country.

It is, therefore, extremely important for the Returning Officer to proceed unimpeded to a final tabulation so that GECOM will be put in a position to make its final declaration in accordance with the relevant provisions of the Act. Any aggrieved party can then exercise its rights under the law to challenge by the result by filing the relevant applications.

The APU+AFC coalition reiterates that the country is growing tired of the shifting demands by the PPP/C in an effort to foment a crisis, create public discontent and destroy the hard-won political, economic and social gains of the past few years achieved under the leadership of both administrations. The PPP took the matter to court and the Chief Justice has made her ruling and now the PPP wants to set aside the CJ’s ruling and demanding another set of action to suit their fabrication of their SoPs. This demand should not be countenanced.

It is of extreme importance to the nation that GECOM carries out its duty under the law by completing the tabulation and declaration exercise as ordered by the Chief Justice and that it maintains its independence and shows the strength with which it is clothed in law. It should tolerate no further disruptions and delays in fulfilling its mandate so that the Guyanese people may resume their normal daily lives in safety, with the full knowledge that its political parties respect the constitution of the Co-operative Republic of Guyana.