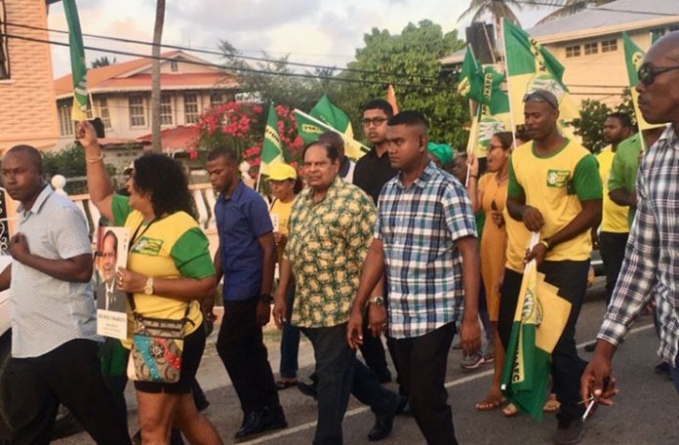 In his home village of Whim, Corentyne, Prime Minister Moses Nagamootoo last evening defended his government’s decision to close several sugar estates by saying that these were “absolutely useless as producing sugar estates.”

He said, “We realised that the sugar industry was going down and those one[s] at Skeldon, Canje, Rose Hall, those at LBI, Enmore, that they were absolutely useless as producing sugar estates. We decided to close them down and in doing so we saved the jobs of 10,000 sugar workers.” According to Nagamootoo, after the APNU+AFC was elected to government, in order to rescue sugar workers they had to subsidise the industry with $1 billion for 38 months. He then told the gathering at Whim Middle Walk Dam that it was the Skeldon Estate which “pulled down the rest of the sugar industry.”

He said the PPP/C administration spent some $50 billion on the Skeldon Estate, “… and (former President Bharrat) Jagdeo said without Skeldon, sugar is dead.” However, he opined, that sugar died at Skeldon since the estate remained a “white elephant.”

According to Nagamootoo, Guyana then was producing sugar at 50 cents per pound while the international price was 16 cents per pound but “Doctor Jagdeo said if you have a modern estate we would produce sugar cheaper, we never had the sugar, all we had was the bitter – no sugar.”

He continued, “All of the redundant workers they got severance, we paid them in equivalent [of] $6 billion dollars, so they collected money. Some of them opened chicken farms, some buy minivan, some started pig farms, some alternative employment, but we never cut them loose without a gill.”

He stated, “We are compassionate, we are caring, we understand the tragedy that Jagdeo and company brought to the sugar industry, they run it down and they use the sugar workers as a voting machine.”

According to Nagamootoo, the only reason opposing parties are using the drama of the sugar industry is to stir racism, “… and to show that this government spite … Indo Guyanese.”

Speaking from a stage that was completely surrounded by security, Nagamootoo told the gathering that while they were subsidising the sugar industry, teachers, nurses, police and soldiers, were getting the “raw end of the stick because we had no money to improve their wages.”

He noted, that they must be a caring government for all of the people hence they increased the public servants‘ wages within four years by 77 %, the old age pension from $7,500 to $20,000 per month, and when we return to office we will increase the old age pension because we respect our senior citizens, we will increase the social assistance because then we will be in a position to do so.”

As he then spoke of the oil industry, Nagamootoo told the gathering that they will fund their promises by the revenues garnered from oil as he broke into singing a few lines of “Magic moment.”

He told the gathering, that Guyana will have 6 billion barrels of oil and that the country is expected this year to grow the economy by 85%, “We will be able to keep those promises that have been made not only by us but by other governments. It is from that fund that we will be able to have this decade of development that President (David) Granger spoke about.”

He said, they would be able to offer free education at the university level to produce an educated nation, “We don’t want to produce a generation of your young people to fetch bundles of cane on their head, we want them to use their brains not their heads.”

He then spoke of his late brother who was a cane cutter, “I use to look at him and say ‘James you getting bald boy’ and he said ‘is the cane boy, the cane does eat out my hair’. Then he started to shave the head in order to avoid the hair dropping out. Cane cutting is hard and it is not the life that you want to condemn your children to, so those who are now praising up sugar workers and saying how great the sugar workers are, they must know that they are not leading our children to a future to compete in an oil and gas sector.”

Nagamootoo, who has been replaced as prime ministerial candidate for the upcoming elections, also charged that the PPP/C administration failed to help rice farmers but it was he who went to Mexico and pleaded with that country to purchase Guyana’s rice.

Further, he said, his government helped farmers by providing six massive pumps in Region Six to assist with drainage and irrigation and also assisted with the paddy bug situation, “We are constantly trying to get better prices for rice and paddy but they now scandalising our names [saying] we promised $20,000 per bag for rice and $9,000 per bag for paddy, which is a blatant lie. They could never establish that anyone of us could have made such an irresponsible statement but again they are playing on the sentiments of the rice farmers because they want to divide us according to race…”

Noticeably, while the crowd was bussed from Eversham Village, Auchlyne Village, Skeldon and New Amsterdam, a few residents of Whim Village gathered at the head of their streets to listen to Nagamootoo deliver his speech in his home village, which was once deemed his stronghold.

As he normally does, he started his speech about his life growing up in Whim Village, Corentyne, and sought to remind the gathering that he walked on mud dams and slept on rice bags.

He said he grew up with honesty in his home and to make do with whatever they had and those were the values that attracted him to Cheddi Jagan and the PPP/C. However, he added, that when Jagan passed away, the dream that he (Nagamootoo) had of a better life died with him, “When you hear the song just now that we want PPP no more it is not Jagan’s PPP the people want no more, it is Jagdeo’s PPP.”

He said next year will mark 60 years of him being in public life, “I have one house, I have one wife, I have the things I have I worked honestly for. I built my house before I became a minister, seven years before I became a minister. I built my house one board at a time, one beam at a time but I have seen after Cheddi died, a guy who was living in a rat hole in Campbellville building a mansion on a land that didn’t belong to him that was called Pradoville, they helped themselves to land, prime land.”

In his hour-plus long speech, he also touched on Whim directly noting that the villagers had asked his government for road, lights and clean drains which they fulfilled but instead at the recent local government elections, the village elected the PPP/C to govern their local affairs.

“The people said they want light, we brought in 14 lights initially, they wanted a road, we improved the road and we put the road to the Kali Temple, they wanted to clean the garbage we brought some brothers and sisters out of Liverpool and Manchester and they came one time with their own tractor and trailer and they cleaned the garbage, all along the people of Whim, they elect the PPP councilors to run their affairs who can’t clean the drains, who can’t remove the garbage.”

He said, when persons complained of the scent of the village they were told to “tell Nagamootoo.” “Well Nagamootoo mamma man didn’t vote for those people over there, is the Whim people who voted by majority to put those people there.”

Calling the Regional Chairman, David Armogan, a professional protester, Nagamootoo then pleaded with the crowd to return them to office and give them a second term.