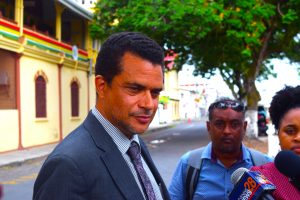 In the aftermath of the yet-to-be determined results from the March 2 General and Regional Elections, the Guyana Elections Commission (GECOM) has been at the centre of rigging accusations. However, the most important voice of GECOM – Chair Claudette Singh – has also been one of the quietest on all the electoral fraud allegations.

According to former Guyana Bar Association President and A New and United Guyana (ANUG) Chairman Timothy Jonas, it is time for the Chairwoman to step out from the shadows and address the concerns of the nation.
“I’m sorry to say the Chairperson has been of no support. Only by her absence and inaccessibility. She is the person who has the swing votes… she needs to be visible, to be there, to be supervising, to be monitoring, to ensure everything is done fairly and transparently,” Jonas said.

“Unfortunately, all we have seen from her is absence and inaccessibility. Hopefully that is going to change, because she needs to step up. The whole nation is depending on her. So far, the whole nation has been disappointed.”
The court case pertaining to the injunction against the recount is scheduled to continue in the High Court on Wednesday. But in laying out his expectations for GECOM should the court clear the way for a recount, Jonas urged Justice Singh to do her job and facilitate a transparent recount.

Transparent and fair recount
When it comes to Region Four (Demerara-Mahaica) Returning Officer (RO) Clairmont Mingo, whose declaration of the District Four votes without completing verification started the whole controversy, Jonas was in favour of the RO being replaced and playing no further part in the process.

“We would like to see her supervise a transparent and fair recount of the ballots, so that the entire nation is assured that the party that won the votes would win the government and that the other parties are allocated seats in Parliament based on the votes they have fairly won, not based on a botched count by Clairmont Mingo,” he said.

Under Singh’s tenure, GECOM has been engaged in many questionable activities, the latest being its removal of ballot boxes from the Arthur Chung Conference Centre (ACCC) without informing the several parties who took part in the elections and stood vigil over the boxes.
The containers were stored at the facility pending a countrywide recount of votes cast at the March 2 General and Regional Elections. Under Police escort, the containers were transported from Liliendaal, Greater Georgetown, to GECOM’s headquarters on High Street, Kingston, Georgetown.

Opposition parties would have camped outside the Centre on a 24-hour basis to guard the containers while one party agent was allowed inside. However, despite their active role, the parties were not informed of the decision to have the containers removed.

Since the elections were held nearly three weeks ago, a winner is yet to be announced. The local and international observers who scrutinised the tabulation process have pronounced it to have not been credible, and a current court case, filed by a candidate of A Partnership for National Unity/Alliance For Change (APNU/AFC),  prohibits GECOM from conducting a recount.

GECOM itself has come in for much of the criticism, with repeated attempts made by Mingo to subvert the process going unchecked by the Commission. Only the People’s Progressive Party (PPP)-nominated Commissioners have voiced their disapproval.

After days of procrastination and the derailment of Region Four’s verification of results, an agreement was brokered with the Caribbean Community (Caricom) to supervise a recount on Monday last of the votes from all the regions.
In fact, it was caretaker President David Granger, who had sought Caricom’s help. The Arthur Chung Conference Centre was chosen as the venue for the recount. The various party agents waited all day, but no recount occurred as GECOM first announced that an agreement would have to be signed, then that it was awaiting legal advice.
As the party agents stood guard over the ballot boxes, GECOM officials, then a fumigation crew from the Public Health Ministry and then Police dressed in riot gear arrived and began herding party agents out of the compound.

The Caricom officials, having witnessed all of this and then being stymied by the injunction, left the country. The European Union and Carter Center observation missions soon followed suit.