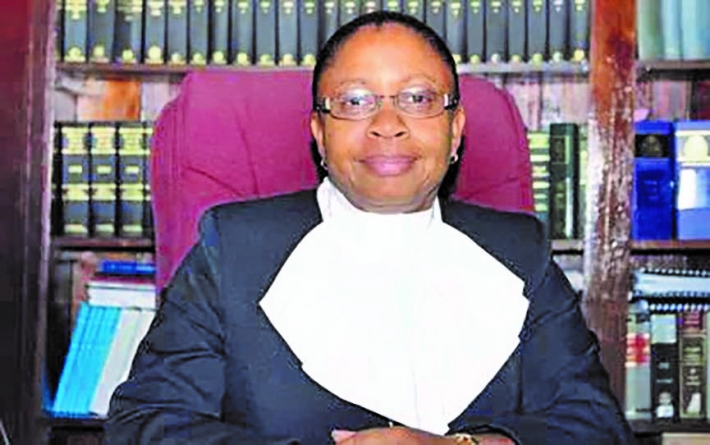 After hearing arguments from both the applicant and respondents in the Region Four elections declaration challenge on Tuesday afternoon, Chief Justice (ag) Roxane George, is expected to hand down her ruling today. This ruling will determine how the Guyana Elections Commission (GECOM) proceeds in determining whether to validate results from Region Four (Demerara-Mahaica) and will ultimately impact on declaring the winner of the March 2, 2020 General and Regional Elections.

The People’s Progressive Party/Civic (PPP/C) was forced to move to the courts and successfully secured injunctions to block Returning Officer, Clairmont Mingo from declaring unverified results of Region Four after the statutory verification process was not being adhered to. An injunction was also obtained to halt the declaration of final results of last Monday’s poll.
After ruling on Sunday that the High Court has jurisdiction to hear the matter, CJ George on Tuesday afternoon heard arguments from lawyers for both sides on the substantive issue of whether the count of the votes in Region Four was validly tabulated from the SOPs and whether it was done in the presence of legislatively stipulated stakeholders – at the end of which, she set 14:00h today for her final ruling.

During Tuesday’s hearing, lead Counsel for the applicant Reeaz Holladar, Senior Counsel Douglas Mendes pointed out that on the issue of counting of the votes, Mingo in his affidavit admitted that it was a clerk under him, Michelle Miller, who completed the inputting process and this was done in his absence, yet he went ahead to declare the results for the region as his personal undertaking.

In his affidavit to the court, Mingo said “I was informed by (Michelle Miller, a senior clerk appointed by GECOM and whom he had left in charge after falling ill on March 4) that in my absence the clerks inputted the data… There was a complete input of all the data for District 4 at around 7:30 pm on Wednesday under the supervision of the senior clerk…”

But Mendes argued in court that Mingo is contradicting himself with what his witnesses, including the Deputy CEO, Roxanne Meyers, said in their affidavits.
“All is being said is that Ms Miller told him that they inputted the data on the computer from Statements of Poll (SOPs) as opposed to doing the process in the presence of the other representatives…So we can deduce from this evidence that regarding the other 458 [unverified] ballot boxes, that the information that was inputted into the system, in relation to those polling boxes, was done by Ms Miller – senior clerk, with assistance from other clerks…,” Mendes contended.

Another violation
This, according to the Trinidadian SC, raises the question as to whether there was another violation of Section 84 (1) of the Representation of People’s Act, which requires the adding up to be done by the RO or an elections officer, which Miller does not fall under

He pointed out that elections officers are required to take oaths but Miller is merely a senior clerk appointed by GECOM to assist the RO. Even if, according to SC Mendes, she was an elections officer, the law requires the RO to be present when this inputting exercise was being carried out.

According to SC Mendes, taking into account the consequence of the breach of that law, the RO might now want to correct this by acting in accordance with 84 (1) and have the entire verification process done in the presence of those entitled to be there. This, he noted, will ensure the process is carried out by law and ensure public confidence in it.
“That cannot cause any inconvenience to anyone. On the contrary, My Lady, the failure to require that the process is done strictly in accordance with 84 (1) will lead to mistrust in the process, it could lead to suspicion and it could lead to a lack of confidence in the results that are eventually declared. There is essentially no good reasons why that order ought not to be made in the circumstances,” the Trinidadian SC posited.

No evidence of actual count
In response, however, lead Counsel for GECOM, the Chief Elections Officer (CEO) Keith Lowenfield and RO Mingo, Senior Counsel Neil Boston explained in court that nowhere in his client’s affidavit mentioned that the senior clerk “counted SOPs” that led to the declaration.

But in rebuttal, SC Mendes pointed out that the “presumption of regularity” was already addressed by the RO when he indicated that he counting was done by the senior clerk.
“He inherently told us exactly what happened and he made it very clear that… the adding up from the Statements of Poll was done in his absence by Ms Miller and other clerks. He has said that clearly and there is no room for presumption of regularity no more,” he contended.

“Substantial compliance”
Moreover, the Trinidadian SC further addressed the issue of “substantial compliance” which was raised by Boston to claim that RO Mingo had complied with the statute to make a valid declaration of the results.
SC Boston had argued that even if the RO had left Miller in charge and was absent for a period of time, he can still take it upon himself to declare the results because he had the figures from his SOPs

The Chief Justice (ag) then pointed out that there were more than half of the SOPs left to be done [421 were dealt with and 458 yet to verified] and this could not possibly constitute “substantial performance”.
“It doesn’t matter,” SC Boston contended, adding that it was a mischaracterisation of what substantial performance is.
“Substantial performance has to do with his acts in moving the process forward…,” he noted.
According to the Guyanese SC, the recount provision catered for any discrepancies to be dealt with.
But SC Mendes rebutted that this could be arguable if it were about 90 per cent of the SOPs completed under Mingo’s direct involvement.

“…But not with less than 50 per cent compliance, My Lady, with something as important as this. That cannot be substantial performance,” the Trinidadian SC insisted.
The question that remained to be answered was, even if it is accepted that the votes were tabulated by the RO, whether he complied with the requirement that this be done in the presence of the relevant stakeholders so as to comply with Sec 84 (1) of the Representation of the People’s Act.
The CJ’s ruling today will determine how the Elections Commission proceeds in declaring the final results of the March 2020 General and Regional Elections in Guyana.

Abusive APNU/AFC supporters
Meanwhile, APNU/AFC supporters who were outside the court beyond the police barricades hurled expletives and insults towards the international observers as they exited the court. The abusive behaviour was also meted out against the foreign press as they left the court on Tuesday.