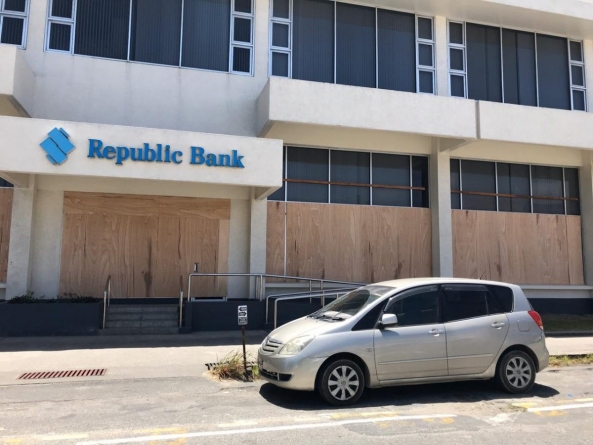 Following days of tension and uncertainty over the results of Monday’s general and regional elections, there was some return to normalcy for a number businesses in the city and its outskirts yesterday, although several remained closed.

The political tension which has blanketed the country since Monday escalated on Friday as some protests by supporters of the People’s Progressive Party/Civic led to violence. There were protests in Regions 3, 4, 5 and 6.

However, at the Stabroek and Bourda Markets yesterday, there was evidence of higher commercial activity than during the week. Some stalls in the market were nevertheless closed while a few closed for half of the business day.

The bus and car parks in the vicinity of the Stabroek Market were observed to be functioning but with no traffic congestion.

With the unrest unfolding, Republic Bank, Scotia Bank and other entities in the city took precautionary measures and installed plyboard to protect their windows at some of their branches.

Meanwhile, at Mon Repos, a day after a hostile protest, many persons were seen shopping at the market. It was evident however, that many stalls were closed there too. Mon Repos market is known to be one of the busiest on Saturdays. Yesterday that was not the scenario as the shopping activity there was muted down in even though persons were making purchases.

Residents of Mon Repos on Friday afternoon burned tires and placed several objects on the road in a move to prevent traffic from passing through the community. The agitated residents kept the police busy as they lit several heaps of tyres on fire at different points on the road.

The residents said they were protesting the Guyana Election Commission’s Region Four Returning Officer Clairmont Mingo’s declaration of unverified regional results from Monday’s polls. His declaration showed the APNU+AFC coalition in the lead.

In addition, following an announcement by the management of the Giftland Mall that it would close “if the laws are not followed,” businesses there were opened as per norm yesterday. However, traffic into the mall was relatively low when Stabroek News visited around 3 pm. The only concession that was closed was one run by A. Ally and Sons.

Saturdays are said to be the busiest at the mall as thousands would visit the mall to engage in social activities such as watching movies and hanging out at the bars along the Strip.

When the protests began on Friday, several persons had visited supermarkets and stocked up on necessary items as they were unsure of what coming days would hold.

Private Sector Commission (PSC) Chairman Gerry Gouveia on Tuesday had said that it was important that GECOM declares the election results in a timely manner as it was necessary for the country to return to a state of normalcy as businesses need a non-threatening environment.

His comments were made hours before the hiccups at the elections commission in which the verification of Statements of Polls were interrupted.

A drive around the city by this newspaper on Tuesday revealed the slowdown or in some cases complete stoppage of business activities. Traffic flowed smoothly as the streets were not congested as they usually are. At the markets, stalls were also closed but roadside vending continued as per normal. Some supermarkets were also open and taxi services were also in operation.

Apart from business activity, the turnout at schools across the country was also relatively low as parents opted to keep their children at home for last week. This resulted in most schools closing after the morning session.