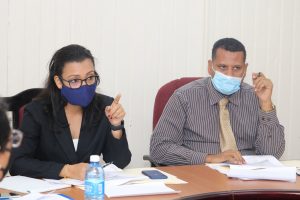 The Ministry of Housing and Water yesterday announce that it has commenced a review exercise for questionable allocations made, following complains by allottees that they feel duped out of their hard-earned monies for lands they are still to identify.

The issue was brought to attention of the subject Minister, Collin Croal, on Wednesday as he was conducting a series of community meetings in the West Berbice region.
“Initial checks into these recent allocations have revealed that the ownership of these lands by our agency remains in limbo. This is compounded by the fact that these lands have no infrastructure in place and allottees cannot even identify their lots,” the Central Housing and Planning Authority (CH&PA) announced yesterday.

The ‘allocations’ were announced within the period leading up to the March 2 elections.
That raised suspicions with the transactions, CH&PA said.
“Given the time frame when these allocations were made, the assumption can be made that these allocations were a mere political gimmick. Until such time when the review process is completed in the best interest of our citizens, a decision has been taken to simply put a hold on accepting payments for these allocations.”

The Ministry, which oversees CH&PA, said it nonetheless remains committed to the delivery of serviced lots, with all basic infrastructures in place, inclusive of fair weather access road, water distribution network, electrical network as well as drainage network.
“We therefore want to reassure all applicants that the status of their applications will in no way be affected and they will be processed in due time.”