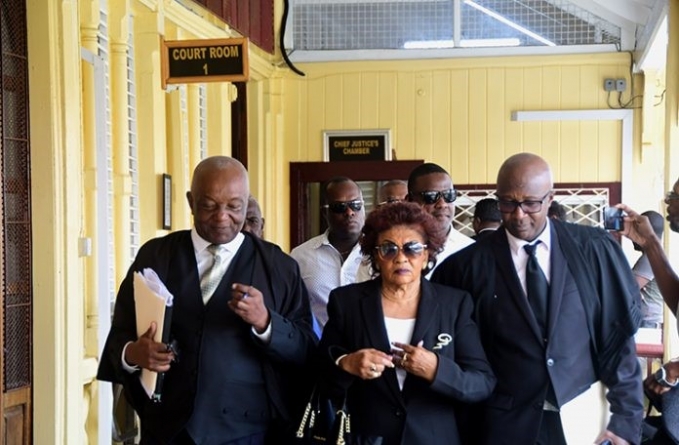 Chief Justice (ag) Roxane George-Wiltshire, on Friday, said the Returning Officer for Region Four, Clairmont Mingo, must produce the statements of poll (SOPs) during the tabulation of votes for his electoral district, as she offered greater clarity to her March 11 judgment.

“The statement of poll has to be shown,” Justice George-Wiltshire said. At the time, the Chief Justice was hearing a contempt of court case brought against the returning officer by a private citizen – Reeaz Holladar – over an alleged failure to adhere to the orders handed down by the High Court on March 11, 2020.

While the tabulation process, in keeping with an order of the High Court, recommenced at 11:00hrs on Thursday last, the returning officer resorted to the use of a spreadsheet for the tabulation of the votes in the reported absence of the SOPs – a move which resulted in major objection from agents attached to some political parties. The disagreement later resulted in the tabulation process being suspended for the day, and Holladar moving to file Contempt of Court proceedings on behalf of the People’s Progressive Party Civic (PPP/C).

Appearing on behalf of the returning officer, who was present in the court, in association with Attorney-at-Law Robin Hunte, Senior Counsel Neil Boston told the Chief Justice that his client has been adhering to the orders of the High Court despite attempts to derail the process by some. But in responding to a series of questions posed by Justice George-Wiltshire, Boston explained that the returning officer had placed the contents of the SOPs and the polling station number on a screen for the duly-appointed candidates and observers to view.

“If it is that you are getting it from this document [the SOP], why you just can’t show the document,” the Chief Justice questioned, while making it clear that the returning officer must produce the SOPs during the tabulation process.

Even as Boston sought to interject, the Chief Justice further added, “I don’t see…what is the difficulty in producing the document.”

While making it clear that it is not for the representatives from the various political parties and observers to disrupt the process by raising concerns after concerns, Justice George-Wilshire said they are entitled to view the SOPs in accordance with the Representation of the People Act, Chapter 1:03.

“They want and are entitled to see it [the SOPs] because Section 84 (1) says that the tabulation is to be done from the statements of poll in the presence of persons [entitled to be there],” Justice George-Wiltshire said. She noted that the method of tabulation, be it, the use of a pencil and ruler or spreadsheet, ought to be determined by the returning officer and not the persons entitled to be there.

It was noted that party agents can make note of their concerns and at the end of the process, formally request a recount or challenge the results of the elections by way of an election petition.

The Chief Justice offered greater clarity on her ruling after GECOM and Holladar’s representatives failed to come to an agreement during a brief adjournment of the case on Friday.

Prior the brief adjournment of the case, the Chief Justice reminded the parties involved that during her ruling she had indicated that all and sundry ought to be “reasonable” in the execution of the exercise. She noted that the tabulation of the results was being dragged out and time wasted even as the country awaits the final results for the March 2 General and Regional Elections.

“We have a nation awaiting; and this is a lot of posturing and grandstanding on all sides. Why can’t we just get on with it,” she questioned.

Meanwhile, outside of the courtroom, Boston assured journalists that going forward, the SOPs will be used to tabulate the votes for each list of candidates, who had contested the general and regional elections in District Four. “It is going to happen,” he assured journalists, explaining that the actual SOPs will be displayed on a screen in addition to the station number.

Chairman of the Guyana Elections Commission (GECOM), Justice (Ret’d) Claudette Singh, who had intervened following Thursday’s objections, said she was pleased with clarification offered by the Chief Justice, and will ensure that the returning officer complies with the ruling of the High Court. “It was a consensual agreement that the [SOPs will be displayed] and if there is a discrepancy to be addressed, we will go through with the count until the end, and…it will be addressed at the end. If it cannot be addressed, then we will move to a recount,” Justice (Ret’d) Singh explained.

Meanwhile, Attorney-at-Law, Anil Nandlall, Holladar’s legal representative, said he was pleased with the clarification by the Chief Justice, even as he underscored the importance for transparency in the tabulation of the votes from the SOPs for the more than 800 polling stations in District Four.