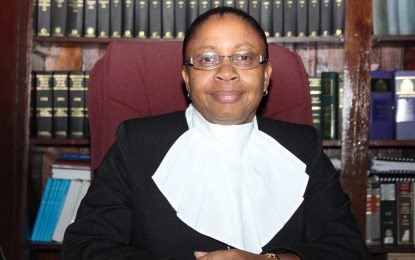 Acting Chief Justice Roxane George-Wiltshire will today rule on whether the High Court has jurisdiction to hear an application from the PPP/C, which is seeking to have the tabulation of votes in Region Four from last Monday’s general elections done according to the law prior to the declaration of a final result.

In a rare weekend sitting of the court, the matter came up for hearing yesterday and will continue today when the court delivers its ruling. Acknowledging that the entire country is in a tense state as it anxiously awaits the finality of last Monday’s general and regional elections, the chief justice said her court will be working assiduously to expedite the matter.

Last night, the Guyana Elections Commission (GECOM) published the results of Monday’s polls on its website. It is not clear what impact this will have on the court case.

It is the position of the opposition through Reeaz Hollader, who is listed as the applicant for the injunction, that in the absence of completing verification of the tabulation of votes for electoral district four, a final result for the elections could not be declared in accordance to law.

On Thursday, GECOM controversially declared the results for district four, which show the incumbent APNU+AFC coalition securing 136,335 of the valid votes cast compared with 77,259 votes secured by the PPP/C. While the regional results for all the other nine electoral districts were publicly declared by their respective district Returning Officers, the results for district four were released to the media fraternity via WhatsApp after 9 of the 10 parties contesting objected to attempts by district four’s Returning Officer (RO) Clairmont Mingo to make this declaration.

While the verification process of the tabulation of votes for district four had commenced earlier, on Thursday, it was halted with the understanding that it would be resumed later. However, following commotion which erupted at GECOM’s command centre between local party observers on both the government and opposition sides, Mingo began announcing the results for district four.

His attempts were, however, drowned out by loud shouting from members of the opposition and other political parties. It was after this that GECOM’s Public Relations Officer Yolanda Ward disseminated the results to the media via WhatsApp.

The statutory Declaration Form 24 was signed by Mingo and countersigned by Volda Lawrence the APNU+AFC Counting Agent. All other Counting Agents refused to sign the document.

If the numbers are accurate and are mirrored at the general elections, the APNU+AFC coalition would have won the elections by in excess of 7,000 votes or one seat.

At yesterday’s court hearing, Senior Counsel Neil Boston, who represent respondents – Mingo, GECOM and Chief Election Officer Keith Lowenfield – argued that the application filed by Hollader raises questions about the elections which the court did not have the jurisdiction to hear.

He contended that any inquiry into the validity of the elections regarding the tabulation of votes and anything connected to the elections could not be decided by the court through an injunction as the court would have no jurisdiction to hear such a challenge.

On the contrary, he argued that in accordance with law, Hollader’s application would have to be brought by way of an election’s petition before the special jurisdiction of the High Court by the tribunal established to address challenges to an election.

According to Section 5 of the National Assembly (Validity of Elections Act), an election petition shall be presented within 28 days after the results of the elections.

Trinidad and Tobago Senior Counsel Douglas Mendes, who represents Hollader, however, argued that the court does have the jurisdiction to hear the matter as his client was not seeking to challenge the validity of the elections, but rather to have the verification process of the tabulation of votes for district four be completed.

Speaking to the media, Anil Nandlall, one of Hollader’s attorneys, had said that there is no need for his client’s challenge to be brought via an elections petition since such a petition comes after the entire elections/electoral process would have ended.

According to Nandlall, with the verification of votes for district four not completed, the elections, in the same vein, could not be regarded as having been completed either.

Against this background, he argued that his client’s application is therefore properly before the court, which is vested with the jurisdiction to hear and decide it.

Boston argued that in accordance with Article 162 (1) and 163 (1b) of the Constitution, the High Court is vested with the special category of powers with the constituted tribunal, which has the exclusive jurisdiction to hear elections petitions, which are made possible through Section 3 of the National Assembly Validity of Elections Act.

Boston contended that Hollader’s application falls squarely on issues to be determined by the special tribunal of the court through an elections petition since it is seeking to question the count of votes.

Mendes had, however, pointed out that contrary to what Boston was contending, his client is not challenging the elections as it has not properly concluded, neither any final result, which he said could not be regarded as having been given.

In fact, Mendes said that his client was challenging the tabulation by GECOM of votes for district four.

Without this verification being done, Mendes said that a final result could not be declared by RO Mingo.

In response, however, Boston said that when one examines the country’s elections laws, it does not contemplate the use of a two-stage process of judicial review where, while elections are considered not yet complete an injunction can be sought to prohibit certain actions, and yet allow an elections petition to be filed to challenge the validly of the very elections or anything connected therewith.

“This cannot be the law,” Boston asserted. Citing case law, he said that interlocutory injunctions cannot be granted to prevent the process as the applicant is attempting to do.

He said too that such issues are to be challenged by elections petition after the elections, so that there is no protracted delay in a government being installed.

Mendes stressed that what his client is simply seeking is for the law to be followed to see the verification and tabulation of votes for district four be completed as had been the process in the other nine electoral districts.

He said that irrespective of who wins the election, this verification process must be done for transparency.

Boston, however, said that there is no requirement in law, though it may have been the practice of the Elections Commission, for any such verification to be done.

On Thursday, Nandlall had secured the injunction from Justice Navindra Singh before whom he made an oral application on behalf of his client. He thereafter proceeded to serve it on Mingo.

The lawyer had given an undertaking to have his client’s written application and supporting affidavit prepared 72 hours thereafter for filing and service to counsel on the other side.

However, it was communicated to both sides on Friday that the matter was coming up for hearing yesterday before the chief justice.

When the case was called shortly after 10:30 yesterday morning, Mendes had indicated that given the short notice of attendance for court, they were unable to complete their affidavits as well as filing and service.

In the circumstances, the chief justice stood the matter down for 1:30pm yesterday to facilitate the completion of these administrative processes.

Yesterday’s hearing lasted for almost three hours before a courtroom packed to capacity with lawyers, international elections observers, local and foreign journalists and members of the public. Meanwhile, scores of anxious APNU+AFC supporters lined the streets outside the courthouse, eagerly asking reporters as they exited the precincts of the court for an update of the proceedings.

Given the high-profile nature of the case and concerns for security, police barricades, manned by a number of police officers, were placed around the court. Security was enhanced at the main entrance to the building as well.

Since the completion of voting almost a week ago, citizens have been waiting anxiously to see who will form the next government. Both the APNU+AFC and PPP/C have claimed victory.

Following the declaration made by Mingo for the results of district four, PPP/C supporters have staged protests in several villages across the country, some of which erupted into violence.

Police fatally shot a teen at Cotton Tree Village, West Coast Berbice after he allegedly attacked and chopped ranks who had been deployed to the area.