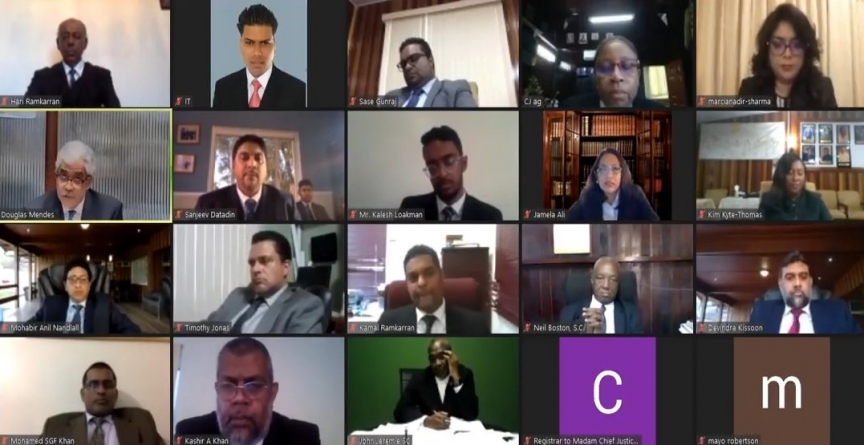 Acting Chief Justice Roxane George-Wiltshire will deliver her decision on Monday at 4 pm in the latest challenge seeking to block the Chairperson of the Guyana Elections Commission (GECOM) from declaring the winner of the March 2nd polls using the figures of the recount.

This newest in a series of actions connected to the elections has been brought by Tucville resident Misenga Jones who wants the Chairperson, Claudette Singh  to be prohibited from using the results of the national recount to declare a winner.

Justice George-Wiltshire heard about five hours of arguments and said that while she had been hoping to issue a decision on Sunday, given the “richness” of the submissions she would have to defer her judgment to Monday.

The principle of res judicata – a matter that has been adjudicated by a competent court and therefore may not be pursued further by the same parties – featured prominently in the submissions by counsel for several of the smaller political parties. They argued that the matters in Jones’ motion had already been addressed at the Guyana Court of Appeal and the Caribbean Court of Justice.

Responding to these arguments, John Jeremie, counsel for Jones, argued that “These are new facts”. He stated that the other cases cited did not feature the dispute that has now arisen between the GECOM Chair and the Chief Election Officer Keith Lowenfield over what results should be presented.

Earlier in the proceedings, Douglas Mendes, counsel for PPP presidential candidate Irfaan Ali and PPP General Secretary Bharrat Jagdeo argued that Justice George-Wiltshire did not have jurisdiction in this matter.

Mendes argued that in any case, Lowenfield is subject to the direction and control of GECOM under Section 18 of the Election Laws (Amendment) Act.

“For the time being he (Lowenfield) must obey the law” and reserve his opinion for an election petition, Mendes said.

“This is the only way to resolve this Milady”, he said.

He urged: “Get the election over” and have a government elected by the will of the people installed and then let the matter go to court.

Mendes also took a jab at Lowenfield’s counsel, Neil Boston who said that the truth of the people’s will was reflected in the declaration of District Four Returning Officer, Clairmont Mingo. It was Mingo’s false declaration that triggered the recount. Mendes was incredulous at that statement and wondered if he had heard correctly.

While acknowledging that it had been a long day, Justice George-Wiltshire quipped at the conclusion that she felt “refreshed” and could have gone on for another hour.

At a case management conference on Wednesday, the CJ had listed some of the main issues which would be under consideration.

Another matter to be considered would be whether Section 22 of the Election Laws (Amendment) Act of 2015 is constitutional or unconstitutional.

She said that a tangential issue would be whether the March 13 declarations of the returning officers of the 10 districts should be set aside or retained.
The CJ further said that the court would have to address whether the case before her is res judicata – a matter that has been adjudicated by a competent court and therefore may not be pursued further by the same parties.

In this respect she adverted to cases at the Guyana Court of Appeal in relation to Ulita Moore and at the Caribbean Court of Justice.

The new legal action brought by Jones contends that GECOM Chair  Singh can only make a declaration from the report submitted by the Chief Election Officer Keith Lowenfield and that neither she nor the Commission can dictate to him what his report should contain.

Jones asserts that GECOM is obligated to accept the CEO’s report of June 11th, in which he relies on the declarations made up to March 13 by the Returning Officers for the 10 administrative regions. Those declarations, which were disputed due to the manipulation of the Region Four results, had been held in abeyance as the recount was agreed to. The recount showed the PPP/C won the majority of votes, while Lowenfield has sought to declare results in favour of the incumbent APNU+AFC.

The GECOM Chair has since said that those declarations have been set aside.