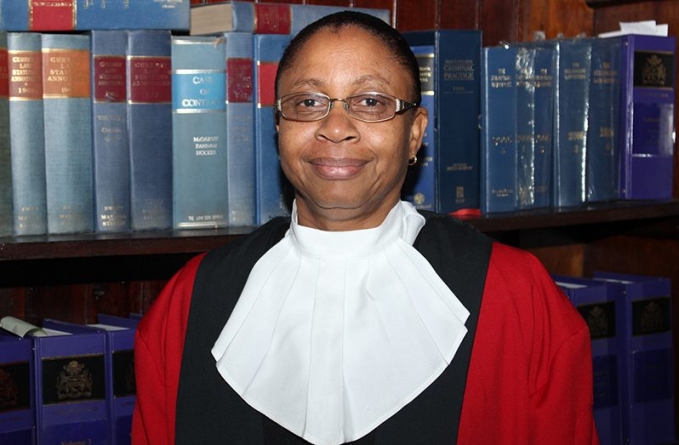 LATE on Thursday evening, Chief Justice Roxane George issued a conservatory order halting the deportation of 26 Haitians who are currently in protective custody at the Hugo Chavez Centre for Rehabilitation and Reintegration at Onverwagt, in Region Five (Mahaica-Berbice.
On December 1, Principal Magistrate Sherdel Isaacs-Marcus, at the Georgetown Magistrates’ Court, issued an order for the Haitians to be taken to the nearest port of exit.
This newspaper was made to understand that the foreign nationals, 10 men, nine women and seven children, had arrived in Guyana on November 7, and were reportedly granted a six-month stay.

However, the Haitians allegedly gave incorrect information to immigration officers about where they would be staying while in the country, and days after, they were found at a city hotel and in a minibus on the Linden-Mabura Road, which constitutes a violation of their stay.

President of the Association of Haitian Nationals in Guyana, Kesnel Toussaint, through attorney-at-Law Darren Wade, moved to the High Court in a bid to challenge the deportation of the Haitians.

Wade is contending that the order for deportation issued by the magistrate is arbitrary, and in violation of the fundamental rights of his clients.
When the matter came up for hearing on Thursday, Wade asked the court to grant a conservatory order suspending deportation of his clients, pending the hearing and determination of the case.

The attorney, in his submission, is relying on the Constitution of Guyana and the Caribbean Community (CARICOM) Single Market and Economy (CSME), as well as certain aspects of the matter which brings the Revised Treaty of Chaguaramas into focus to have the matter referred to the Caribbean Court of Justice (CCJ) for adjudication.
The conservancy order was met with strong objection by Attorney-General and Minster of Legal Affairs Anil Nandlall, who is representing the State.
The Attorney-General is contending that the Fundamental Rights provisions of Guyana’s Constitution, specifically Article 47, which Wade is trying to invoke in support of his case, is flawed, since it only applies to citizens of Guyana and other Commonwealth member states, as well as other persons and countries listed therein.
According to Minister Nandlall, Haiti is not a part of those territories, since it did not sign on to the free-movement aspect of the Caribbean Community (CARICOM) Single Market and Economy (CSME).

He further stressed that Haiti is not included in those territories, and as such, “these persons are aliens under the Constitution [of Guyana].”
Nandlall also raised the issue of jurisdiction in the case, which the court does not have to entertain the application.

In light of the foregoing circumstances, the Chief Justice granted the conservatory order suspending the deportation of the Haitians. The court will hear full arguments on December 18, 2020.
Last week, Toussaint, through his lawyer, Wade, had filed a Habeas Corpus in the High Court on behalf of the Haitian Nationals. In his affidavit, he told the court that just a few hours after arriving in Guyana on November 7, the Haitians were apprehended by the police. A group was removed from the Bristol and Bristol Hotel, located on South Road, Georgetown, while another group was arrested on the Soesdyke-Linden Highway.

The police claimed they were suspected to be victims of a human trafficking ring, which allegation the Haitians have consistently denied.
Toussaint stated that since their detention three weeks ago, the Haitians have been denied Counsel, although several requests were made.

He contended in the affidavit that the Haitians came here legally, and were granted an automatic six-month stay, in keeping with Guyana’s obligation to the Treaty of Chaguaramas.
Last Friday, the case brought against the Commissioner of Police Nigel Hoppie, and Attorney-General Anil Nandlall, came up before Justice Priya Sewnarine-Beharry.
Recently, Home Affairs Minister Robeson Benn disclosed that approximately 33,000 Haitians have been reported as “missing” over a three-year period, following their arrival in Guyana.
Benn had claimed that the 26 Haitians, inclusive of seven children, were part of a human trafficking ring.