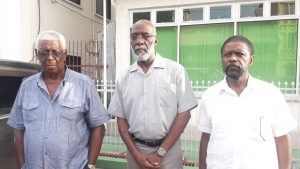 The People’s Progressive Party (PPP) has made moves to prevent Chief Elections Officer, Keith Lowenfield, from making a final declaration of the 2020 General and Regional Elections results. It has filed motions for a series of injunctions with the Chief Justice, Roxane George-Wiltshire.

But the matter was adjourned pending a recount of the Region Four ballot.
Attorney-at-law Anil Nandlall speaking to the media after the hearing at the Diamond/Golden Grove Magistrate’s Court, which substituted for the High Court, said that the party sought to preserve the status quo. The requests were mainly filed on the premise that an election result should not be declared because Region Four Returning Officer, Clairmont Mingo, did not comply with Section 84(1) of the Representation of the People Act.
However, during the hearing, a statement was released by the CARICOM Chair and Barbados Prime Minister, Mia Mottley that President David Granger and Opposition Leader Bharrat Jagdeo mutually agreed to invite a high level CARICOM delegation to oversee a recount of the Region Four ballots.

GECOM Attorney-at-law Neil Boston said that the matter was adjourned for Monday.
Commissioner Sase Gunraj said that the recount would be a good opportunity for GECOM to salvage its credibility.
On the side of the government commissioners who held a press brief following the hearing, it was communicated to the press mainly by Commissioner Vincent Alexander that no papers were served at the hearing and that an important respondent, Mingo, was nowhere to be found.