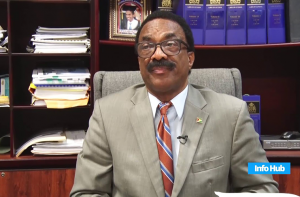 The private criminal charges purportedly filed in the Magistrate’s Court against Keith Lowenfield are unfounded and unsupported in law as questions into whether he has performed his functions validly is prohibited by the Constitution and the Representation of the People Act.

This is the position of the Chambers of the Attorney General, headed by Basil Williams SC. The chambers said: “any enquiry that the law allows must come by way of an election petition to the High Court pursuant to article 163 of the Constitution and the National Assembly (Validity) of Elections Act, Cap. 1:04,” the Chambers said.

Magistrate Faith McGusty, at the Georgetown Magistrates Court, on Friday morning issued a summons for Lowenfield to attend court and answer to the three charges filed against him for alleged fraud and misconduct, based on his Elections Report submitted on June 23. Initially, two private charges were filed by General Secretary of The New Movement (TNM) Daniel Josh Kanhai and People Progressive Party/Civic (PPP/C) member Desmond Morian. But on Friday, another private charge against Lowenfield was filed by Morian.

According to the AG chambers Section 3 of the National Assembly (Validity) of the Elections Act, Cap. 1:04 provides that- (1) Any question referred to in article 163(1) (a), (b) and (c) of the Constitution may, in respect of an election…be referred to the Court and shall thereupon be determined by it in accordance with this Act. (2) Every such reference shall be by a petition…presented to the Court in accordance with this Act.

It added that Article 226 (7) by its proviso excluded the Elections Commission from article 226 (6) because of the exclusive jurisdiction given to the High Court under article 163 to inter alia determine the lawful conduct of an election and membership of the national assembly. Section 140(1) of the Representation of the People Act, Cap 1:03 states that the Court can enquire into whether any function of the Elections Commission or a member of the Commission has performed validly or at all. However, this enquiry of the Court is limited to questions on the membership of the National Assembly and elections pursuant to article 163 and any law made under article 163. Section 140(1) of the RPA states-
Except to the extent that jurisdiction in that behalf has been conferred, and the exercise thereof is required, by the Constitution or any law made under article 163 thereof (which provides for the determination by the Supreme Court of Judicature of questions as to membership of the National Assembly and elections thereto) and save as hereinbefore provided to the contrary, no question whether any function of the Elections Commission or of any of its members has been performed validly or at all shall be enquired into in any court. “Based on the foregoing, the actions of Mr. Lowenfield cannot be enquired into by the Magistrates Court as Article 163 has given the High Court the exclusive jurisdiction to deal with these matters. Accordingly, the Director of Public Prosecutions should intervene and prevent an abuse of the court by entering a nolle prosequi for this outrageous prosecution,” the chambers stated.

Summoned
On Friday, all parties involved were present in court, except Lowenfield. This was due to the fact that Lowenfield was never served in person with any of the charges or necessary documents. The charges were first sworn to in court by the informants in the case of Kanhai and Morian. The Magistrate then issued a summons for Lowenfield and adjourned the case until July 24. Speaking outside of the court, Hanoman explained that one of the charges against Lowenfield attracts a penalty of life imprisonment, since it is also an indictable charge. He also claimed that more charges are expected to be laid against other key personnel at GECOM. On June 30, the first set of charges was filed by Kanhai and Morian.

Kanhai is alleging that Lowenfield, between March 5 and June 23, 2020, at Georgetown, in the Georgetown Magisterial District, County of Demerara, State of Guyana conspired with person(s) unknown to commit the common law offence of fraud, to wit, by representing to the Guyana Elections Commission, that tables attached to his Election Report dated June 23, 2020 accurately reflected the true results of the said election, in order to materially alter the results of the said election with intent to defraud, knowing the said tabulation to be false.

Morian is also alleging that Lowenfield, between March 5, 2020 and June 29, 2020, while performing his duty as the Chief Elections Officer of GECOM, without lawful excuse or justification, willfully misconducted himself at Georgetown, a county of Demerara, State of Guyana, a place within the Georgetown Magisterial District by ascertaining results of the 2nd March, 2020, General and Regional Elections for Guyana, knowing the said results to be false, the said willfull misconduct amounting to a breach of the public’s trust in the Office of the Chief Elections Officer of the Guyana Elections Commission. The second charge which was filed by Morian on Friday against Lowenfield claiming that he allegedly conspired with Region Four District Returning Officer Clairmont Mingo to alter results that had been declared in March for that district.