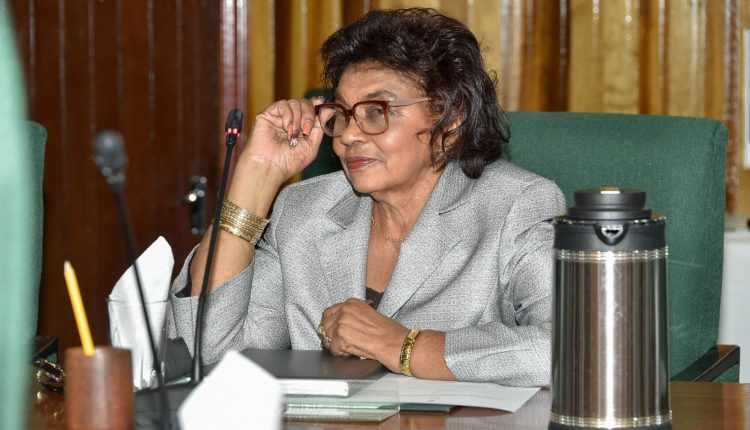 A court challenge has been filed to block the attempt by Chairperson of the Guyana Elections Commission (GECOM) retired Justice Claudette Singh to declare the winner of the March 2nd polls using the results of the national recount process,

The new legal action, brought by Tucville resident Misenga Jones, contends that Singh can only make a declaration from the report submitted by the Chief Election Officer Keith Lowenfield and that neither she nor the Commission can dictate to him what his report should contain.

As a result, Jones, who is represented by attorney Mayo Roberston, asserts that the Guyana Elections Commission (GECOM) is obligated to accept the CEO’s report of June 11th, in which he relies on the declarations made up to March 13 by the Returning Officers for the 10 administrative regions. Those declarations, which were disputed due to the manipulation of the Region Four results, had been held in abeyance as the recount was agreed to. The recount showed the PPP/C won the majority of votes, while Lowenfield has sought to declare results in favour of the incumbent APNU+AFC.

GECOM, Singh, Lowenfield and the Attorney General have been listed as respondents in Jones’ action.

Singh was served by marshals of the High Court before a previously scheduled meeting of the Commission at which submission of the CEO’s report was on the agenda.

Lowenfield had been given a 2pm deadline yesterday to submit the report.

The matter, which was filed as an urgent fixed date application, will be heard virtually via Zoom at 10 this morning by acting Chief Justice Roxane George-Wiltshire.

Jones is asking the court to make a number of declarations, including that Singh has failed to act in accordance with the advice of the CEO in his most recent report as mandated by Article 177(2) (b) of the Constitution.

Following a ruling handed down by the Caribbean Court of Justice (CCJ) a week ago, Singh had instructed Lowenfield to submit a report using tabulations from the national recount of ballots cast on March 2nd. Lowenfield has, however, repeatedly submitted reports which show a win for the incumbent.

Jones wants the court to declare that the CEO is not subject to the direction of either the Chairman or GECOM regarding the contents of his report and that any instruction from either is unlawful, void, and of no effect.

Against this background, she wants the court to nullify all the correspondence sent from Singh to Lowenfield that purported to direct him as to what his report should contain.

She is particularly asking the court to declare invalid a letter, dated July 9th, citing Section 18 of the Election Laws (Amendment) Act as authority for the CEO being subject to the supervision and control of GECOM.

The applicant calls this missive of the Chairperson misguided, invalid, and having no application to the CEO in the performance of his duties.

Jones is contending that GECOM has no authority to declare any person president except by using the report submitted by the CEO pursuant to Section 96(1) of the Representation Act (ROPA).

She also wants the court to declare that the report required by the CEO under Section 96 of the ROPA must be based on the votes counted and information furnished by the 10 Returning Officers from their respective 10 electoral districts which were submitted to Lowenfield up to March 13th.

Jones is arguing that Lowenfield is not entitled to base his report on data generated from the recount and wants the court to make a declaration to this effect and that the votes counted during the recount are invalid as she contends that they do not conform to the concept of valid votes described by the CCJ.

According to Jones, the data generated from the recount “purportedly” conducted under Order No. 60 of 2020 was generated by an unconstitutional process as the Order requires decisions on validity of ballots which by Article 163(1)(b) are the exclusive province of the High Court.

She argues further and seeks a declaration that the votes counted and information furnished by the returning officers of the 10 electoral districts on March 13th contain the votes that are ex facie valid in that they were tabulated in the presence of, inter alia, the duly appointed candidates and counting agents of contesting parties and, therefore, are properly the valid votes contemplated by Section 96(1) of the RPA.

Jones’ position is that any challenge to the CEO’s report to GECOM on July 11th can only be mounted via an elections petition and that the Commission does not have the constitutional authority to alter the CEO’s report.

As a result, Jones wants a declaration that neither the Chairperson nor the Commission can alter the votes counted and that information forwarded by the 10 Returning Officers to the CEO are final and therefore cannot be set aside, varied or altered.

On this point Jones wants the court to order that the declarations of those Returning Officers of votes cast by electors in favour of the lists of candidates at the elections which were made on or before March 14th are the sole legal basis for the CEO’s report to the Chairperson.

Jones also wants the court to restrain any person other than the presidential candidate in the list which the CEO advised in his report to GECOM on July 11th  –David Granger—from taking the oath of office as president.

In her application, Jones describes herself as a resident of Tucville, Georgetown and “community organizer with a strong interest in politics.”

She said that having voted, she anxiously awaited the results of the March 2nd elections and expected that within a few days thereafter there would have been a public announcement of the results so that she would have known who was elected president and members of the National Assembly.

On Monday, GECOM had moved closer to declaring the PPP/C winners of the elections when Singh set aside the 10 declarations submitted to the Commission on March 13th, thereby ordering Lowenfield for the fourth time to submit the results of the recount.

These 10 declarations had been held in abeyance until the conclusion of the National Recount on June 8th.  They include the since discredited declaration of District Four Returning Officer Clairmont Mingo.  Opposition-nominated commissioners and the PPP/C had previously urged Singh to remove these declarations but she had said that they would be left in abeyance. Singh has come under mounting local and international pressure to declare the result of the recount.

Lowenfield was first instructed to submit a report using the recount results on June 16th. Instead of complying, he submitted a report which invalidated in excess of 115,000 votes cast, claiming that his actions were in line with the June 22nd ruling of the Appeals Court that “more votes cast” should be interpreted to mean “more valid votes cast”. Lowenfield subsequently submitted a report of “credible and valid” votes while a three-day stay on the court’s decision was still in effect.

After an appeal, the CCJ set aside the Appeal Court’s ruling and Lowenfield was again directed to submit a report of the result of the recount. He did not do so. Instead, he wrote to the Commission seeking clarification.

In the letter, he argued that the CCJ had found that the order for the national recount was in conflict with the Constitution and a result could not create a new election regime.

He further suggested that Singh’s directive on the preparation of the report suggests a change in procedures from the practice submissions based on declarations from Statutory Officers namely Returning Officers.

In response the Chair again directed that Lowenfield submit a report of “valid votes counted in the National Recount as per the Certificates of Recount.”

Once again the CEO failed to comply with this directive and submitted instead a report using the several declarations from March 13th.