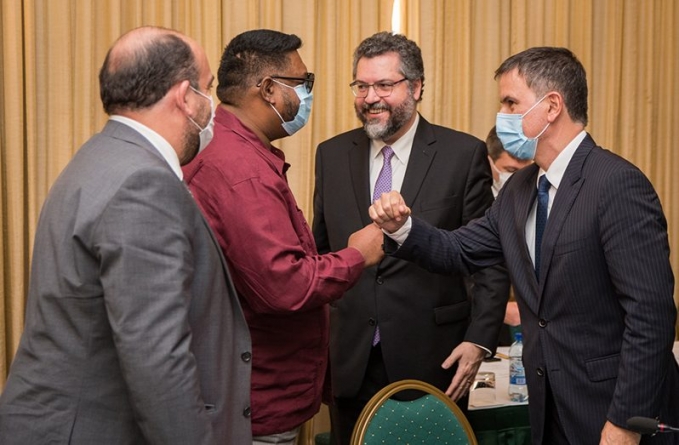 FOR decades, Guyana and Brazil have discussed the possibility of linking the two nations through the construction of a paved road, and while there has been more rhetoric than action on this front, there seems to be a clear path now, as both nations have agreed to restart tangible discussions on this project.

Guyana is linked directly to Brazil through Lethem, which lies just on the edge of the border between the nations. The journey from Lethem to Georgetown takes as many as 13 hours depending on the state of the road. It recently became impassable. But, once paved, the projection is that the trip will take no more than five hours.

This piece of infrastructure will not just improve transportation, but it will also augment trade and tourism, increase land value, among other things.
Those and other possibilities were discussed on Thursday when, high-level officials of the Government, including President, Dr. Irfaan Ali, met with a visiting team from Brazil, which included the country’s Minister of External Relations, Ernesto Araújo and senior officials of the Ministry of External Relations and the Federal Police of Brazil.

The visiting team also held discussions with Vice-President, Bharrat Jagdeo; Minister of Foreign Affairs and International Cooperation, Hugh Todd; Attorney General, Anil Nandlall; Minister of Agriculture, Zulfikar Mustapha; Minister of Public Works, Juan Edghill; and Minister of Home Affairs, Robeson Benn.
President Ali, in a statement issued subsequent to the meeting, said the paving of the Linden to Lethem road, which will facilitate trade and investments between the two nations, was high on the agenda.

“That road link is linked to the port development, so for that issue, we have set up a special committee that will be led by the ministers’ technical teams, so we can advance the work and move, not only to the conceptualisation, but closer to the implementation of this project. Both sides have committed fully to this development—via a joint approach,” said the President.

IMPLEMENTATION
Both countries also agreed to the implementation of an “International Road Transport Agreement”.
Additionally, the two sides reviewed the existing programme of cooperation between Guyana and Brazil and agreed to the implementation of a number of measures aimed at expanding and strengthening collaboration at the bilateral and regional levels, within the context of existing cooperation mechanisms.
Following positive discussions, both parties also agreed on modalities for advancing the cooperation agenda in trade and investment, health, agriculture, energy, tourism and security.
President Ali, who returned on Thursday from Suriname, after a four-day State visit, said the meeting was a follow up to what started in Suriname and will see all three countries connecting at many levels.

“We’re talking about the integration of the Guiana Shield and link to Brazil. That discussion started in Suriname,” said the President.
President Ali said that the discussions were riveting and included key areas of focus, including discussions to expand the partial scope agreement (PSA), energy, Guyana’s oil and gas sector and other energy potentials which can be exported to the Portuguese speaking nation.

VISIT
He said that the aim is to develop these areas in anticipation of a visit by Brazil’s President, Jair Bolsonaro, early next year.
A Memorandum of Understanding (MoU) for the technical feasibility studies for the installation of optical network from Boa Vista, Brazil to Georgetown, Guyana was also signed during the visit.

“There will be a number of teams that will commence work almost immediately leading up to the visit of the President (Bolsonaro), so that you can advance these initiatives forward,” said President Ali.

The President added that the idea was to have an investment arrangement, where potential investors can have an understanding of the opportunities that exist in Guyana and how to access them.

It is common knowledge that investments could only be successfully made in a safe environment, so, both parties discussed pertinent areas and issues like security and the pervasive novel coronavirus (COVID-19) pandemic.

Areas of security, according to the President, included: integration of our security efforts, targeting drugs and securing the borders.
“We’ve also set up a high-level team to look at the security concern and integrating what we’re doing into the regional programme. So, that was also an area that we discussed,” said President Ali.

Meanwhile, according to the President, a MoU was also expected to be signed between the Customs Anti-Narcotics Unit (CANU) and the Brazilians.
President Ali said that, coming from a previous discussion with President Bolsonaro, it was agreed that the two countries will also work closely to fight COVID-19.
“Brazil has been developing its own vaccines, so, it will be manufacturing nationally… In my discussions with President Bolsonaro, we’ve talked about this, and Brazil supporting Guyana with our vaccination programme when it comes around,” said President Ali.