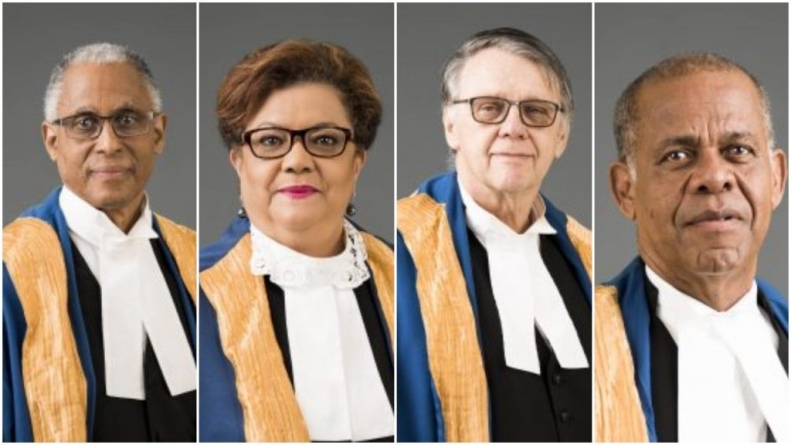 The Caribbean Court of Justice (CCJ) will rule next Wednesday at 15:00h in the case brought before it seeking to quash the Court of Appeal decision to interpret Article 177 (2) of the Constitution to say the party for which “more votes are cast” should mean “more ‘valid’ votes are cast” in determining the winner of the elections.

The ruling set off a perverse interpretation by the caretaker Coalition, which is clinging to its claims that only the votes the Chief Elections Officer Keith Lowenfield deems to be valid or to be absolutely without question should be tabulated and form the basis of the results for the elections.

That fear of the Opposition People’s Progressive Party was confirmed by Mr Lowenfield’s latest report which denies the PPP victory and instead comes up with a calculation that favours APNU+AFC.

The Attorney for the original Court of Appeal Applicant Eslyn David, Trinidad Senior Counsel John Jeremie, admitted to the Court that he could find no instance in case law which shows that the election of a President was challenged even before the person was actually so declared and became President. He later said he had found one.

Former Speaker of the National Assembly and Senior Counsel Ralph Ramkarran called on the Court to intervene with firm orders to bring relief to the people of Guyana from the “torment” of the past four months.

Opposition Leader Bharrat Jagdeo and PPP Presidential Candidate Irfaan Ali, through Trinidadian Attorney Senior Counsel Douglas Mendes argued that the Court of Appeal had no jurisdiction in the matter and that the motion that had been brought before it should be dismissed.

Mendes argued that the question which had been raised by Eslyn David was misplaced and premature because the article under the Constitution it hanged on concerned the qualifications of the election of someone as President.

In this case, the elections machinery was yet to complete the process of declaring a President and so the Court of Appeal had no powers to hear and determine the case.

He had argued that the definition of the Court of Appeal that more votes cast must mean more valid votes are cast was innocuous, or without consequence and was only being used as a vehicle to deny victory to the real winners of the elections.