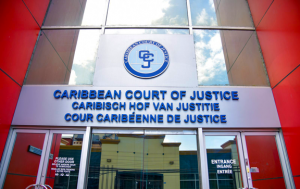 The Caribbean Court of Justice (CCJ) has announced that while it will be going on a two-month hiatus, the court will still be accepting urgent cases, leaving open the possibility of an appeal after Guyana’s Court of Appeal rules in their upcoming election-related case.

In the Jones v GECOM case, A Partnership for National Unity/Alliance For Change (APNU/AFC) supporter Misenga Jones is seeking to have the Guyana Elections Commission (GECOM) use fraudulent declarations to declare a winner of the elections.
In fact, it is an appeal of the High Court’s previous decision to throw out the case, on the grounds that Jones’ application was “hopelessly flawed.”

Earlier, Attorney-at-Law Sanjeev Datadin had said in a social media post that the court can still hear cases. According to Datadin, who represents the United Republican Party (URP) in Jones v GECOM, the announcement is no cause for alarm.
He had explained that the court has previously heard matters during its vacation. Therefore, Datadin had said that if either party wishes to appeal the upcoming decision in the case, they should be able to do so.
The CCJ itself later confirmed in a statement on its social media account that it can indeed hear urgent matters during its two-month break. The court explained that its e-filing system remains accessible.

“Please be advised that term three for the CCJ closes on July 31, 2020. Until the following term resumes on October 5, 2020, our e-filing system remains open and any matter considered urgent by the court will be heard,” the court also said.
It is understood that if the Appeal Court decision on Thursdays goes either way, the ruling is expected to be challenged in the Caribbean Court of Justice (CCJ).

Following the 33-day National Recount, it was demonstrated that the People’s Progressive Party (PPP) won the elections with 233,336 votes while the APNU/AFC coalition garnered 217,920. Guyana Elections Commission (GECOM) Chair, Retired Justice Claudette Singh wrote to her Chief Elections Officer, Keith Lowenfield, on June 16, instructing him to prepare a final report based on the recount.

Instead, Lowenfield had submitted a report invalidating over 115,000 votes based on unsubstantiated allegations of dead and migrant voters, made by the APNU/AFC. Lowenfield’s actions caused an immediate uproar and the varying sides found themselves in the Caribbean Court of Justice (CCJ) for the Irfaan Ali et al v Eslyn David et al case.
Among other decisions, the CCJ ruled unanimously that Lowenfield’s report, which arbitrarily disenfranchised voters, was invalid and that the concerns raised by the APNU/AFC coalition must be addressed in an elections petition.

The GECOM Chair wrote Lowenfield again, instructing him to submit his report so that the President could be declared. However, Lowenfield then engaged in a back and forth with the Chair in which sections of the CCJ judgement were twisted and misconstrued.

He then submitted a fraudulent report to Justice Singh, in which he included the fraudulent declarations of embattled Returning Officer for Region Four Clairmont Mingo, which inaccurately shows that the PPP/C gained 80,920 votes while the APNU/AFC received 116,941 votes in Region Four. Just when Singh looked set to forge ahead with or without the CEO, APNU/AFC supporter Misenga Jones took GECOM to the High Court.

Ruling
In her ruling on July 20, Chief Justice (ag) Roxane George threw out the Misenga Jones application, ruling that Recount Order 60 of 2020 is valid and must be used as the basis to declare the results of the 2020 General and Regional Elections. In fact, she referred to Jones’ application and the contentions of Attorney General Basil Williams as “hopelessly flawed.”

The Judge ruled that Jones and Williams misinterpreted what the CCJ ruled. In fact, Justice George said that if one is to read the ruling, the CCJ plainly endorsed, rather than invalidated, the recount.
The Chief Justice also made it clear that Lowenfield is no lone ranger, and must take his direction from GECOM Chair, Retired Justice Claudette Singh. She also read the CCJ judgement itself, which supports Section 18 of the Election Law Amendment Act and the subservient role Lowenfield plays.

While Justice George emphasised the importance of lawyers not rehashing old cases repeatedly, Misenga Jones’ lawyer, Senior Counsel Roysdale Forde had indicated plans to appeal the ruling. It is this appeal that Court of Appeal Judges Dawn Gregory, Rishi Persaud and Priya Sewnarine-Beharry will issue rulings for on Thursday.