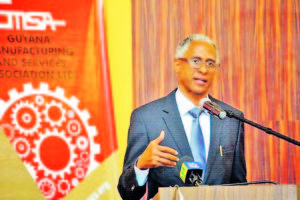 The Caribbean has been influenced by colonial powers, which has shaped and governed various systems throughout its tenancy and is still alive in the present-day setting.

However, President of the Caribbean Court of Justice (CCJ), Adrian Saunders on Friday lobbied for the use of Caribbean jurisprudence throughout the region, starting with the acceptance of the regional court as the final pedestal for appeal cases and introducing revised law courses for students.
He was speaking at the United Nations Development Programme’s (UNDP) forum on a needs assessment of the judicial system across nine countries, including Guyana.

Justice Saunders indicated that the first step in accepting regional jurisprudence starts with countries acknowledging the CCJ as their final appeal court, rather than moving to the Queen’s Privy Council in the United Kingdom. As it stands, only four countries have taken this route with others yet to follow.
“From the vantage point of a Judge of the Caribbean Court of Justice, the critical question is for me, what can the donor community do to advance Caribbean jurisprudence. Of course, it goes without saying a momentous step in promoting Caribbean jurisprudence would be taken if all the states in the region followed the lead of Barbados, Guyana, Belize and Dominica in embracing the CCJ as their final court of appeal,” the CCJ President insisted.
He added, “Events occurring over the last two and a half months have brought a sharper relief, the incongruity of most of the region’s final appeal being heard in London by their lordships of her Majesty’s Privy Council. Notwithstanding, there are other important ways of promoting Caribbean jurisprudence and engage the attention of the donor community.”

While acknowledging the semi-centennial anniversary of offering law studies in the Caribbean, it was pointed out that now is the time to reflect on the progress throughout these years in moulding a better curriculum for students and whether it needs more work.
“This year marks exactly 50 years since the English-speaking Caribbean began the teaching of law in the region. The opening of the doors of the University of the West Indies in 1970 was a fundamental milestone in the development of a Caribbean jurisprudence. After 50 years of teaching law, it is about time to reflect and to take stock.”

Saunders pointed out that in the early years, textbooks used to study law in the Caribbean were crafted specifically for students in the United Kingdom and the case laws used were those decided in the UK. As such, a proposal was made to Vice Chancellor of the University of the West Indies, Sir Hilary Beckles, to examine the extent of English influence on the legal education system. This could be done through a partnership with the CCJ with room to modify the teaching materials. But while talks were budding, the COVID-19 pandemic took its course.

“After 50 years of producing our own lawyers, judges, legal academics and our own final appellate court, how much has changed with respect to the teaching of the law? Earlier this year, I proposed to Sir Hilary Beckles, UWI’s Vice Chancellor, that the University could partner with the CCJ on a project that would analyse course materials and worksheets that are used in certain core subjects of the curriculum in the faculty of law. The goal will be to discover the extent to which we have been teaching English law to imbuing our law students with a more Caribbean-centric jurisprudence.”

Saunders said he is looking forward to the UNDP’s support in this regard since it will aid in solutions to social and economic realities. Moreover, he said Caribbean jurisprudence cannot thrive without “robust assessment and critique of judicial decision-making” by the academic community.
“There has been a falling off on commentaries on Caribbean judgements. It would be wonderful if funding could be found to reinvigorate this endeavour,” the CCJ President expressed.
The laws of the Caribbean derive from a mixed legal tradition of both common law and civil law systems. In fact, it is said that the documents that represent the common law, civil law and mixed legal systems resulted from the different colonisation processes that occurred in the region.