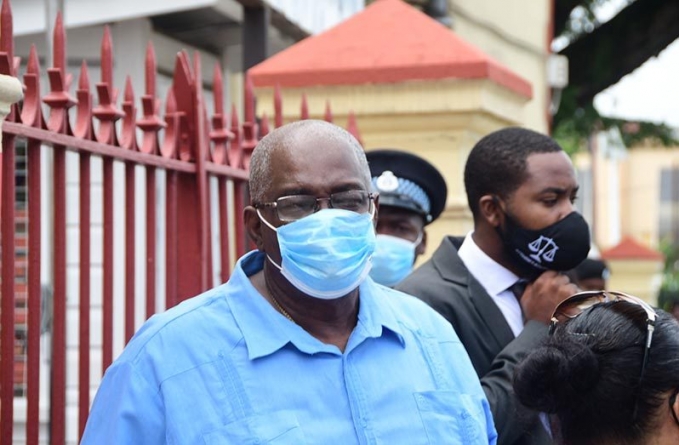 THE case filed against Chief Elections Officer (CEO), Keith Lowenfield, was postponed until September 11, 2020, to allow the Director of Public Prosecution, Shalimar Ali-Hack, to further review the file and decide the way forward.

On Monday, August 10, 2020, Lowenfield’s attorney, Nigel Hughes, wrote to the DPP requesting that the three criminal charges of alleged fraud and misconduct against his client be withdrawn.

DPP then took over the case from special prosecutor Glen Hanoman and had vowed to review the evidence in the case to decide if the case will continue against Lowenfield or will be withdrawn. When the case was called on Monday, August 24, 2020, before the Chief Magistrate Ann McLennan, a representative from the DPP told the court that the DPP needed additional time to review the numerous evidence and statements.

The Chief Magistrate adjourned the case until September 11, 2020.

In July, Lowenfield appeared before Magistrate McGusty to answer to three private criminal charges brought against him for alleged fraud and misconduct. He was not required to plead to the charges and was released on $450,000 bail.

The charges in question were filed by the People’s Progressive Party/Civic (PPP/C) member, Desmond Morian, and by general secretary of The New Movement (TNM), Daniel Kanhai, on June 30, 2020.

In his private criminal charge, Kanhai is alleging that Lowenfield, between March 5 and June 23, 2020, at Georgetown, in the Georgetown Magisterial District, County of Demerara, State of Guyana, conspired with person(s) unknown to commit the common law offence of fraud, to wit, by representing to the Guyana Elections Commission, that tables attached to his Election Report, dated June 23, 2020, accurately reflected the true results of the said election, in order to materially alter the results of the said election, with intent to defraud, knowing the said tabulation to be false.

Morian is also alleging that Lowenfield, between March 5, 2020, and June 29, 2020, while performing his duty as the Chief Elections Officer of GECOM, without lawful excuse or justification, wilfully misconducted himself at Georgetown, within the Georgetown Magisterial District, by ascertaining results of the March 2, 2020, General and Regional Elections for Guyana, knowing the said results to be false, the said wilful misconduct amounting to a breach of the public’s trust in the Office of the Chief Elections Officer of the Guyana Elections Commission.

The second charge which was filed by Morian against Lowenfield claimed that he, allegedly, with Region Four District Returning Officer, Clairmont Mingo, altered results that had been declared in March for that district.

Recently, Guyana Police Force (GPF) has launched a “comprehensive” investigation against the Chief Elections Officer and the Returning Officer for Region Four after it received formal reports of alleged criminal misconduct by the duo.
Police, in a statement, noted that formal reports allege criminal conduct by Mr. Keith Lowenfield and Mr. Clairmont Mingo and others in relation to the March 2, 2020 General and Regional Elections and events subsequent thereto.

As a result, Police Headquarters noted that legal advice was obtained from the Director of Public Prosecution (DPP), and the GPF was advised to launch a comprehensive investigation into these allegations in accordance with its mandate.

“The DPP has further indicated that in the exercise of powers vested in her, under Article 187 of the Constitution, she will take over the private criminal charges currently pending in the Magistrate’s Court in relation to the March 2, 2020 General and Regional Elections and its aftermath,” police stated.

The country’s Chief Elections Officer, Keith Lowenfield, had presented results for the March 02 elections, with the exact inflated figures for the APNU/AFC Coalition as declared by District Four Returning Officer, Clairmont Mingo, which was widely protested as being fraudulent.
This led to a national vote recount, which clearly established that the People’s Progressive Party/Civic (PPP/C) was the winner of the elections.
The elections’ results were finally announced on August 2, after a five-month delay.