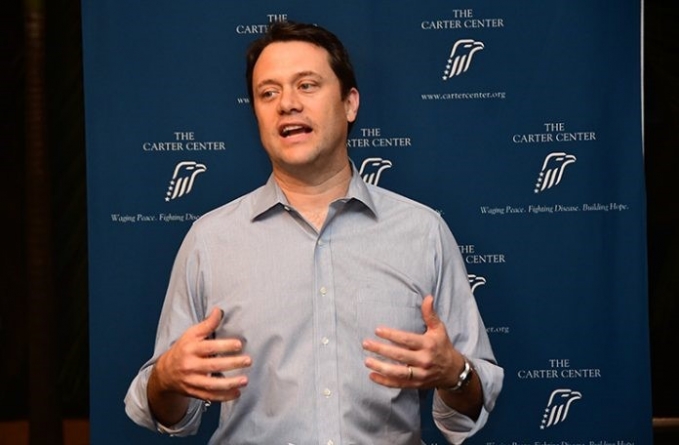 In light of civil unrest in parts of the country, International Observer Mission, the Carter Center, which is observing the ongoing General and Regional Elections, has called for Guyanese to be calm and exercise patience as they await the “official” completion of the electoral process.

The civil unrest followed the declaration of results for Region Four (Demerara-Mahaica), on Thursday, by the region’s Returning Officer (RO), Clairmont Mingo. According to those results, the incumbent A Partnership for National Unity and Alliance For Chance (APNU+AFC) Coalition received 136,458 votes and the PPP/C received 77,329 votes.

The Carter Center believes that the process is not over and there is still an opportunity for the Guyana Elections Commission (GECOM) to re-establish and salvage the process, and have a credible election.

Among the actions, which the mission believes could be taken by GECOM, is a recount of the ballots for Region Four – similar to the ones ongoing in Regions Five (Mahaica-Berbice) and Six (East Berbice-Corentyne). Additionally, other activities and tabulation can be done in the presence of party agents and observers.
Following the declaration of the results for Region Four, the People’s Progressive Party/Civic (PPP/C) and five other contesting parties said it will request a recount of the ballots in this region.

“Be patient as we await the finalisation of the process… people need to know that the process is not over and is still ongoing…we ask for peace, calm and patience on the part of the Guyanese people,” said Co-Chair of the Carter Center, Jason Carter, during a press briefing at the Pegasus Hotel, on Friday.

While the process is yet to be completed, Carter believes that GECOM needs to be clear and speak out about what exactly is going on. He said the country went a whole day without hearing from GECOM about the status of the outstanding issues.
“Speak out and let people know what is going on, report on the status for the district four recount and say when we will see additional results with respect to Region Four,” said Carter, adding that if there is no information from GECOM, there will be rumours and misinformation in the public.

He said the center sought updates from GECOM, but there were only informal communications throughout the day, on Friday. According to Carter, there was no “observable activity” at the office of the Returning Officer for Region Four on Friday.
Although the Carter Center is encouraging GECOM to continue the process, Carter made it clear that the mission and other observers do not stand with any political party. The center stands for a fair, transparent and credible election process.

The Carter Center had observed elections when the PPP/C was elected in the past, and it also observed the 2015 elections when the incumbent APNU+AFC Coalition was elected to office. And, each time the presence of party agents, the ability to scrutinise the tabulation process and the ability to have a transparent process gave the center faith in the elections.
As it is now, the center said his mission does not know who won the elections and they do not know if the numbers, which were declared on Thursday, are accurate. GECOM is the only authority that can provide those results.

There have been reports about the Carter Center and other observer missions “overstepping its bounds,” but according to Carter, there is a code of conduct with respect to international election observation and a set of “strict standards” that the center is using and abiding by.

CHAOTIC AND INAPPROPRIATE
While on the topic of standards and conduct, Carter said the center, on Thursday, observed that the environment at Mingo’s office was chaotic and inappropriate at times.
“We are disheartened by the partisan activities that occurred with respect to the chair and on the third floor of the GECOM offices. The verification process, while it was ongoing, was conducted in an orderly and calm way and we saw partisan activities occur after the declaration of results that we have been discussing,” he lamented.
Although there were issues, Carter said the vast majority of the electoral process was smooth, transparent and it was one which the center would have faith in, if they could get the tabulation of results in Region Four.