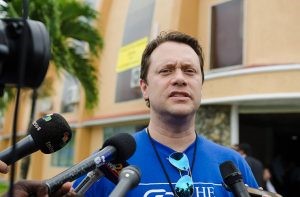 The Carter Center observer mission yesterday said the results announced by the Guyana Elections Commission (GECOM) for voting in Region Four were “not credible” as it and other international monitors urged a resumption of a lawful count, including the processing of Statements of Poll (SOPs).

Through its Public Relations Officer Yolanda Ward, GECOM yesterday released an unverified tabulation of the votes cast in District Four (Region Four) at Monday’s polls, which suggested that the incumbent APNU+AFC received enough votes for re-election.

“The fact that there was no transparency about the results that were ultimately announced today means that the results lack credibility,” Jason Carter, Co-Chair of the Carter Centre Observer Group, told reporters outside of the Region Four Tabulation Center last evening.

He stressed that the Carter Center has repeatedly commended GECOM for its transparency but on Wednesday and yesterday the transparent verification of the results from District Four was stopped and unverified results published.

“We don’t know and no one else can verify whether the results that were announced are the correct results or not. We don’t know because there was no transparency in the process of announcing those results,” he said.

According to Carter, at other tabulation centres, there was an agreed procedure where parties were able to verify the SOPS.

Noting that whomever wins the election would like to do so in a credible and transparent way, he advised that either a recount or SOP verification be conducted for Region Four.

In a separate statement, the Center said it was “deeply concerned” about the events that took place at the Office of the Returning Officer for Region 4 and the decision to announce results that had not been verified.

“Up until today, the electoral process has been a remarkably transparent one with well-administered procedures on election day that provided an opportunity for the Guyanese people to express their will. Today, however, the tabulation process that had been taking place in Region 4 was circumvented, critically undermining transparency and preventing international observers and political parties from observing tabulation. As a result, the election results released today for Region 4 are not credible,” it said.

It added that there is still an opportunity for the elections to have credibility and reflect the will of the people as expressed at the polls on March 2. “There are a number of rules under Guyanese law that could be utilized in order to ensure credibility, including considering a request for a recount in Region 4,” it observed, while noting that it is important that the appropriate GECOM officials make clear how such a request can be made and received, with due regard to any concerns about security.

It also encouraged a return to the transparent verification procedures that had been in place, including the processing of Region Four SOPs and the parallel verification process conducted by the Chief Election Officer. “All parties contesting the election deserve a process that is credible and transparent and conducted according to established procedures and applicable law,” it said. “Whoever wins the election has an interest in ensuring that their victory is seen as credible,” it added.

Meanwhile, the Organisation of American States (OAS) Electoral Observation Mission yesterday said the process to review and verify the SOPs in the region did not reach its proper conclusion as stipulated in the electoral code and that the results published by GECOM do not meet the established standards and should not be acted upon.

In a strongly-worded statement, it also condemned “acts of violence” that it witnessed last evening at the office of the Returning Officer for the Region Four. “Such actions have no place in any electoral process,” it declared.

The Mission noted that legal remedies were pursued by the opposition People’s Progressive Party/Civic (PPP/C) but that these were unsuccessful. “The OAS calls for this impasse to be resolved peacefully, employing the relevant provisions in the law. Published results should not be acted upon until that time,” it urged.

It also argued that the courts should determine the best possible way forward, while adding that any solution should be open and transparent and guarantee that all parties involved in this election have access to the maximum opportunities for redress under the law. “The Mission urges all citizens to remain calm and calls on all political stakeholders to respect the electoral process as prescribed in Guyana’s legislation,” it further said.

Former Prime Minister of Barbados Owen Arthur, who chairs the Commonwealth observer mission, also said it was “clear… that the tabulation of the final election results has not yet been completed and verified according to the established procedures and relevant legal and statutory provisions.”

In a statement, he noted that members of the mission had been present at the Office of the Returning Officer for the Region over the preceding 24 hours and that he had also visited the office.

He called on GECOM and all parties involved to ensure the process properly follows the legal steps dictated by the laws of Guyana and is in line with the country’s international commitments.

The Caribbean Community (CARICOM) expressed its own concerns last evening about the allegations being made with respect to the tabulation of results based on the Region Four SOPs.

A CARICOM statement urged GECOM to ensure that all legal and procedural processes are faithfully complied with in respect of the vote count and the declaration of results to ensure that the outcome of the polls expresses the will of the people of Guyana. “We call on all parties and Guyanese to remain calm while these issues are resolved,” it said.

The Carter Center, the OAS, the Commonwealth, and CARICOM are among five foreign groups accredited by the Ministry of Foreign Affairs to observer the 2020 elections. Also accredited is the European Union, which has also urged a resumption of the vote count for the region in keeping with the law.