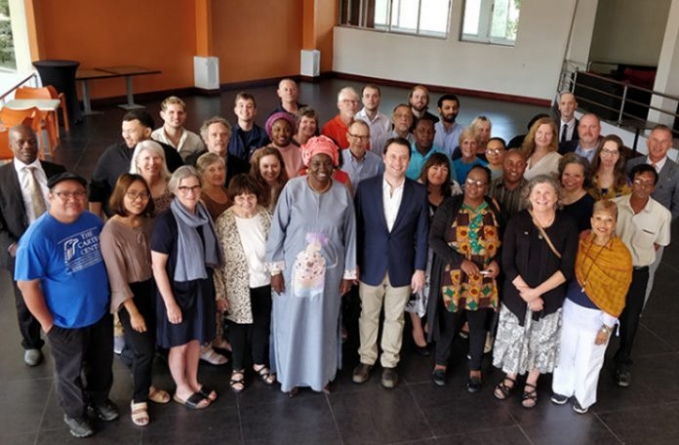 The Carter Center is the second Elections Observer Mission (EOM) to have departed Guyana even as it has assured that it remains committed to observing and supporting Constitutional reform of the electoral process here in Guyana.

The center announced on Friday that its decision was made in light of the absence of an ongoing electoral process, increasing restrictions on international travel because of COVID-19 and the decline in the security environment in Guyana. The team left early on Friday referring to the decision as a “difficult” one and gave all assurances that its future assistance is still available. “In light of the current injunction and subsequent legal process, there is not currently electoral activity for The Carter Center to observe.

The security environment in Georgetown has declined in the wake of the impasse created by the non-transparent tabulation process in Region Four. International observers have been harassed, and protestors supportive of the APNU+AFC Coalition have, at times, blocked international observers from doing their work. Specific threats have also been made against the international community that are unacceptable and further undermine the credibility of the electoral process,” the center stated.

“The center remains committed to promoting democracy and constitutional reform in Guyana and is willing to return when the electoral process resumes, assuming international travel is feasible.” Guyana closed its ports to all international flights at midnight on March 18, 2020 with the exception of outgoing flights; cargo flights; Medevac flight; technical stops by airplanes for fuel and special authorised flights.

Meanwhile, the interim injunction preventing a recount and other legal advice against the gazetting of an Order by the Elections Commission for the said recount resulted in the CARICOM high-level team pulling out from the process in Guyana earlier this week.

On this matter, the Carter Center stated: “The center hopes that conditions will be in place for CARICOM to return to Guyana to supervise a national recount. The Carter Center noted the Guyana Election Commission’s (GECOM’s) willingness to support the recount under CARICOM’s supervision and appreciated the measures taken to make that happen. Both the president and the leader of the opposition agreed to the recount process, and GECOM was satisfied with its legality. The center hopes that that any remaining legal issues hindering the recount can be addressed quickly to avoid further delaying a satisfactory resolution to the electoral process.”

It lamented that Guyana’s electoral process began well with polls on March 2 but was marred with the tabulation of Region Four’s results which would be the ultimate determination for which party won the elections. The center also acknowledged the “chaotic” environment of the Office of the Region’s Returning Officer (RO) during the tabulation, noting that efforts were made by “the large number of persons present and the efforts by PPP/C representatives and others to disrupt the declaration of results”.

Based on subsequent actions taken by the region’s RO during a recount of the Region’s Statements of Polls (SOPs) – which was believed to be in none compliance with expectations set by Guyana’s chief justice – the Carter Center and other international election observation groups have denounced these results as “not credible”. Post elections, the Center has recommended that Guyana’s ‘winner-takes-all system’ be reformed and that all parties commit to national reconciliation and to completing key constitutional reforms in the near future.

“The Center hopes that the electoral process can still be concluded with credible results and that the will of the Guyanese people – as expressed at the polls on March 2 – will be carried out,” it stated. “The Carter Center is thankful to the government for extending an invitation to international election observation organisations and would like to thank GECOM Chairperson, Justice (ret’d) Claudette Singh for her welcome and openness. She has, thus far, shown great personal commitment to achieving a credible election process. The Carter Center remains committed to its mandate to observe the entirety of the electoral process and remains on standby to return to Guyana.” Over 40 observers, representing 15 countries, had travelled to Guyana to observe the electoral process. The delegation was co-led by Aminata Touré, former Prime Minister of Senegal; and Jason J. Carter, Chairperson of The Carter Center’s Board of Trustees.