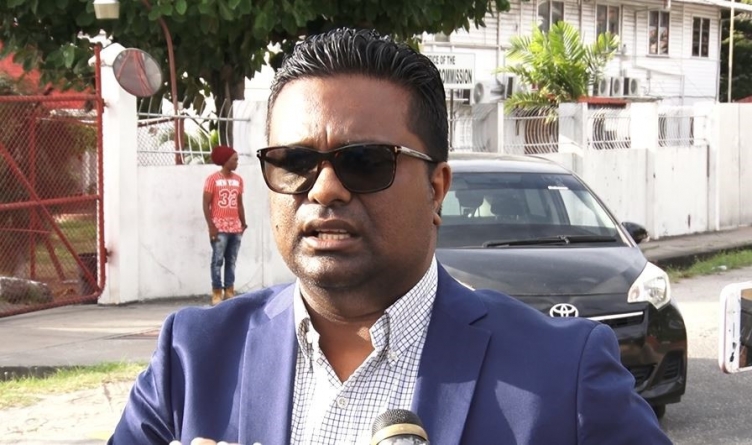 While a delegation from the Caribbean Community (Caricom) is in Guyana to oversee the recount of votes agreed to between Opposition Leader Bharrat Jagdeo and President David Granger, the Guyana Elections Commission (GECOM) will still be in charge of managing the process.

This was emphasised at the conclusion of the first meeting on Sunday at GECOM’s High Street, Kingston, Georgetown, headquarters.
The full Commission of the elections body and Chief Election Officer Keith Lowenfield met with the high-level team which included Caricom Secretary General Irwin LaRocque.
According to People’s Progressive Party (PPP) nominated Commissioner Sase Gunraj, their preliminary meeting was intended to start ironing out some of the logistics for conducting the recount. Gunraj was hopeful that the process could be started by today.

“There weren’t many questions from the group. They have stressed that their function is to oversee the process, not manage the process. It remains GECOM’s process. That’s why we have the responsibility, at GECOM itself, to settle the issues concerning the running of the recount.”
“I’m satisfied, based on my research and reading of the law, that we are allowed as a constitutional body to set our processes and deal with it. I made a suggestion, which is considered by the Commission, in law, that we are allowed to do this,” he added.

Meanwhile, Government nominated Commissioner Charles Corbin said that GECOM will be seeking to do everything “by the book”.

Initial refusal
Earlier on Sunday, the three PPP Commissioners on the elections body and the team from Caricom had to wait several hours for a meeting to be called by the Commission.
The PPP had alleged that the Government nominated Commissioners – Vincent Alexander, Charles Corbin and Desmond Trotman – were reportedly refusing to meet since at the time they were claiming that they were not officially notified of a recount and that Caricom will oversee the process. However, the meeting was subsequently called and all the Commissioners were present.

The team from Caricom will be Chaired by Francine Baron, former Attorney General and Foreign Minister and comprise Anthony Boatswain, former Minister of Finance of Grenada and Cynthia Barrow-Giles, Senior Lecturer in the Department of Government of UWI. They will also be accompanied by two electoral officials from Barbados and Trinidad and Tobago.
The international community, including observers and the United States of America, United Kingdom, Canada and the European Union had described the tabulation process for Region Four as one that lacks credibility and transparency.

An agreement was reached based on a request that was made and agreed to by President David Granger and Opposition Leader Bharrat Jagdeo after a meeting. Prior to the announcement by Caricom, the People’s Progressive Party/Civic (PPP/C) had approached the court to secure its request for a recount of the votes for Region Four.
The matter was held at the Diamond/Golden Grove Magistrate’s Court on Saturday, before Chief Justice (ag) Roxane George as the High Court in Georgetown was being fumigated. The PPP/C had feared GECOM would deny its requests for a recount, and as such, approached the court on that basis. However, during the proceedings, the Caricom Chair made her statement, which was then brought to the attention of the CJ.

Efforts were then made to have the statement authenticated, after which, the GECOM Chair, Justice Claudette Singh was asked to address the court. According to PPP/C attorney, Anil Nandlall, Justice Singh gave a commitment to facilitate the recount.

GECOM had previously been taken to court by Nandlall, who on behalf of a private citizen had sought and was granted an injunction preventing GECOM from declaring the elections without completely verifying the Region Four results.