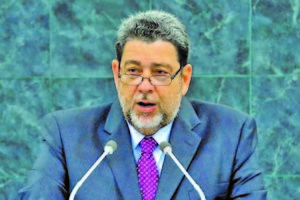 Newly-appointed Caricom Chair and St Vincent and the Grenadines Prime Minister, Dr Ralph Gonsalves on Friday defended his predecessor, Mia Mottley against “jaundiced sources”, after she came under attack for her statements on Guyana’s elections.

Dr Gonsalves accepted the title and responsibilities to lead the Caribbean Community from the Barbadian Prime Minister during the Twentieth Special Meeting of Caricom Heads held virtually.
Earlier last week, Mottley would have taken a stance about the numbers submitted by the Chief Elections Officer, which did not correspond with those coming out from the National Recount, observed by the Caricom high-level team. Shortly after, the APNU/AFC coalition launched a tirade against the outgoing Chairperson.
After taking up the role, Dr Gonsalves lauded Mottley’s efforts to defend Guyana’s democracy, in spite of the unwarranted attacks.

“Her helpful initiatives to assist in the preservation of democracy in Guyana within the terms of the Caricom Charter [for] Civil Society will be long remembered despite unwarranted vulgar and opportunistic criticisms of her from assorted jaundiced sources who ought to know better,” PM Gonsalves declared, in the presence of Guyana’s caretaker Foreign Affairs Minister Dr Karen Cummings, who is part of the APNU/AFC coalition.

Last month during a radio programme in his home country, PM Gonsalves had made it clear that Caricom will not tolerate the stealing of an election in Guyana. He too had come under attacks by elements within the APNU/AFC – which has been refusing to concede defeat.

Regrettable situation
In her farewell remarks, Mottley labelled the ongoing situation in Guyana as “regrettable” as hopes were placed on the Caribbean Court of Justice (CCJ) – one of its designated institutions – to bring the matter to rest and allow for a democratically elected Government to take over the country’s affairs.

“There are a few other countries that are due within the near future to have democratic elections. As a region, we have made it very clear the values that we stand for and those are reflected in the Caricom Charter for Civil Society…I want to say that we have tried to play our role by ensuring that we are there for members of the Community by being able to send in electoral observer teams.”

She added, “In Guyana’s case, we sent in two teams. First, an electoral observer team and then a high-level team that went in after the five Heads of Government visited Guyana when it was clear that there was not going to be an easy ride for the declaration of a result…It is regrettable that today, 3rd July, there is still no clarity as to the conclusion of that electoral process but we’ve said what we had to say on that matter and we await the ruling of the Caribbean Court of Justice.”
According to PM Mottley, the country has a “bright future” but it is one which must ensure that “every Guyanese is a winner”.

Apart from Guyana, three other Caricom countries namely Dominica, Suriname and St Lucia facilitated electoral processes within the past year. However, these countries have all went on to elect a Government after the polls.
Dr Gonsalves takes up the mantle at the height of a global pandemic, COVID-19 which has affected many member states. Due to the region’s dependence on tourism, travel restrictions have completely eliminated any earnings from the sector. This has negatively affected several countries.
Despite the body’s success in putting the region on the map, he said there are some facets of its existence which make it “far from perfect”.

“Our region’s inability to exorcise fully the ghost of the failed political federation of 60 years ago, our ongoing tendency to exalt in relation to each other the fig leaf of individual sovereignties, the challenges of deeper integration from our member states’ islandness even for those which are continental geographically; and the multiple contradictions arising from a hegemonic, neoliberal global order – all these things have conspired to make our union far from perfect,” he detailed.

Nevertheless, the Community has managed to chalk up achievements in its four pillars of integration, namely; functional cooperation, coordination of foreign policy, security collaboration, and economic integration which includes Single Market trading.

Moving forward, the new Chairperson said his priorities will revolve around COVID-19 and interconnected approaches in economy, society and security. Other plans include coordination of regional air transport; socio-economic recovery in the region, strengthening resilience, shaping a new and inclusive global order; and elevating Caribbean civilisation.