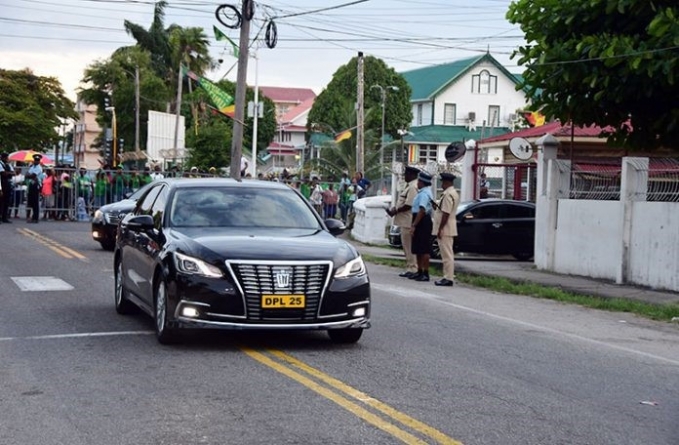 The CARICOM High-Level Team which travelled to Guyana to supervise the re-counting of ballots from the country’s March 2, 2020 General and Regional Elections, on Tuesday withdrew themselves from the process.

At 17:30hrs, the team pulled up at the Guyana Elections Commission (GECOM)’s High and Cowan Streets office, where they engaged the Commission in a brief meeting. Coming out of the meeting, Commissioner Charles Corbin said: “They have formally indicated to us that, given the developments that have occurred, they are currently in discussion, and it is quite likely that they are going to withdraw tomorrow.”

Commissioner Vincent Alexander added: “They have not given up on us; they have withdrawn at this point in time; they have indicated that they are still available if the need arises for an intervention to do so.”

CARICOM Chair, Prime Minister Mia Mottley of Barbados, on Saturday had announced that President David Granger had made a request for CARICOM to field an independent high-level team to supervise a planned national recounting of the ballots cast in the elections.

This was agreed to by Opposition Leader Bharrat Jagdeo, and the two local leaders signed an Aide Memoire for the agreed recount. However, CARICOM requested that this agreement be followed up with an Order and the same gazette, but this was advised against by Guyana’s Chief Parliamentary Counsel, Charles Fung-a-Fat as doing so would supersede electoral laws and infringe on the rights of electors.

This was coupled with an interim injunction and Order granted by the High Court to halt the recount, on the basis that the declarations that have already been made were final, and that GECOM is the only agency authorised to conduct elections.
This being the case, the high-level team withdrew themselves from the process. Though conceding that the way ahead is “not quite clear”, Commissioner Alexander said that the Commission is expected to appear in court on Friday, March 20, 2020.

‘MOST UNFORTUNATE’
Opposition-nominated Commissioner, Sase Gunraj, who also spoke to the media on Tuesday, said that it is most unfortunate that the CARICOM team, which acted swiftly with the intention of assisting Guyana in its electoral process, was prevented from meeting their objectives, due to the actions of the Commission and others.

“As a consequence, they have come here, for several days now, and have not been given the opportunity to perform their functions for which they have come,” Gunraj said, adding:
“We see the alacrity with which the CARICOM has acted, from Saturday morning, when they were engaged by the President and Leader of the Opposition. And by just after lunch, there was a statement issued by the CARICOM Chairman, and by 12:30 that night, there was a plane on the tarmac at the Cheddi Jagan International Airport, with five persons; five experts drawn from various parts of the Caribbean sent here specifically to [assist].”

He highlighted that the team was present in Guyana for three days, and yet the process to commence the recount remained stagnant. He believes that this was as a result of “deliberate actions” from within the Electoral body. Gunraj said that during their brief meeting with the Commission, Baron, the team’s leader, and CARICOM Secretary-General Ambassador Irwin Larocque had some “very strong words” for Guyana, as the country was in “a very precarious place”.

“They both wished us well, and you could see the disappointment and dismay in their faces as they were doing so,” Gunraj said, adding: “Unless something happens that is deeply steeped in maturity, and level-headed and right-thinking members of society see this process through, we are one step away from descending into mayhem.”

Since the March 2 General and Regional Elections, the tabulation process for Region Four (Demerara-Mahaica) was marred by a series of events, beginning with the Returning Officer (RO) and his staff falling sick, to the People’s Progressive Party/Civic (PPP/C) repeatedly storming the GECOM command centre, to an injunction barring the declaration of the results and subsequently a series of objections.

Eight political parties had requested a recount for the contentious Region Four on Saturday, the same day that CARICOM Chairman, Barbados’ Prime Minister Mottley announced that President Granger had requested that the regional bloc field an independent high-level team to supervise the recounting of the ballots. It should be noted that the high-level team’s exit comes as Guyana announced on Tuesday that in order to slow the progress of COVID-19 in the country, it will be closing its airports to all international flights for two weeks, beginning at midnight today, Wednesday, March 18, 2020.