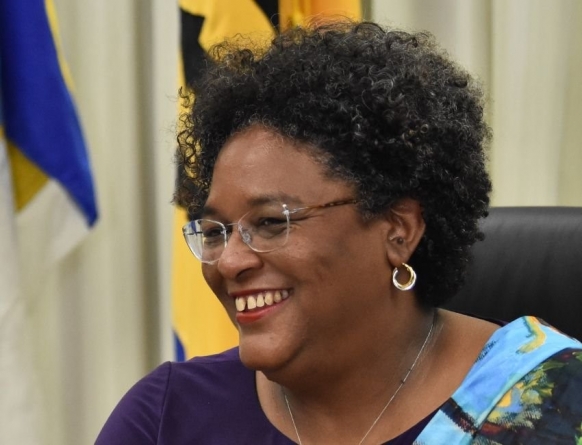 The Caribbean Community (CARICOM) yesterday called on Guyana Elections Commission (GECOM) officials and the political leadership to work together to ensure that the tabulation of the results from Monday’s polling is done according to the law in order for a peaceful and legal completion of the process.

The call was made by the CARICOM chairperson, Barbados Prime Minister Mia Mottley, who said that the preservation of law and order is paramount.

“We are very clear, every vote must be made to count; and transparently so,” Mottley said yesterday in a statement, where she also said “It is critical that good sense prevail.”

“…All parties must work hard to ensure that there is peace on the roads and in the communities across Guyana. There has already been one death reported overnight. That is one death too many,” she added, in reference to the fatal shooting of a Berbice youth, who the police force says was attacking two of its ranks with a cutlass.

Mottley noted earlier pronouncements by both CARICOM and the CARICOM electoral observation mission, for GECOM to complete the electoral process, in wake of the interruption of the tabulation of the results for Region Four, which will decided whether the incumbent APNU+AFC or the opposition PPP/C has won the presidency. GECOM released results for the region on Thursday although the process was not completed.

The head of the CARICOM Electoral Observation Mission, Cynthia Combie Martyr, on Friday said that the mission accepted that the tabulation process which commenced on Wednesday using the Statements of Poll (SOPs) and which was in accord with the law was interrupted and remains incomplete. Furthermore, she said it was evident that the transparent tabulation of results for the region must be resumed under the independent control of the Returning Officer, as these scores are necessary and critical in order to determine the outcome of the national polling.

Mottley also acknowledged serious allegations being made by all sides against each other and she said CARICOM was asking the parties to recognise that the primary consideration must not only be who will be President but, rather, who will be alive come next week or next month “for there cannot be a tolerance for any further loss of life.”

After speaking with both President David Granger and Leader of the Opposition Bharrat Jagdeo, Mottley said she indicated that CARICOM stands ready to be able to be there to facilitate further dialogue and any actions that are necessary.

“We have done this on many occasions in the past, including in Guyana, when elections have been highly contentious and when social order and the rule of law has been threatened across the region,” she noted. “We are family and this is what happens when they are disputes in families.

We will work together to create the space for dialogue and resolution once there is an acceptance of the part of all parties that there is a higher interest beyond simply the result in this election.”