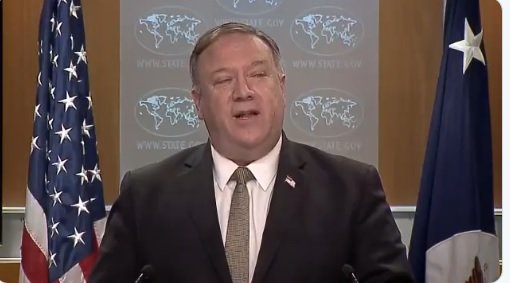 World powers, specifically the United States and the United Kingdom, have called on the David Granger Administration to “step aside” and allow the duly-elected Government to take its place.
But Harmon, who is Granger’s point man, asserted that the coalition Government is convinced that it is fighting a “just cause” and will not be influenced by calls for it to concede.
“We will not bend,” Harmon was quoted by the Department of Public Information as saying on Thursday, one day after the United States authorities announced that they have imposed visa sanctions on Government and other electoral officials who are involved in undermining Guyana’s democracy.

Harmon, a former Minister of State under the Granger Administration, in a defiant mode, pronounced that there has been no declaration made in favour of the PPP/C and calls for the coalition to concede are “premature”.
This is in spite of the fact that the National Recount has shown that the Irfaan Ali-led PPP/C has won the elections with 233,336 votes. In fact, the Chairman of the Guyana Elections Commission, Justice Claudette Singh, has directed the Chief Elections Officer Keith Lowenfield to prepare his report for final declaration using the recount results.

“Concede to what? Concede to who? What is he to concede to? It appears to me — and I’ll venture to say any right-thinking person — to be a most ridiculous and nonsensical proposition,” Harmon was quoted by a section of the State media as saying.
He further asserted: “To those persons who are calling for Mr Granger to concede, that is not going to happen.”
The Recount Order was officially gazetted before the process commenced. And the legal position and general understanding by all stakeholders was that the recount results would replace those previous declarations made by the ten Returning Officers and hence, would be the basis for the winner to be declared.
The Caribbean Court of Justice (CCJ) endorsed the National Recount, which was agreed to by President Granger himself and by the Leader of the Opposition, Bharrat Jagdeo, following the huge controversy over District Four Returning Officer Clairmont Mingo’s fraudulent declaration.

However, Granger and his coalition are now using all avenues to discredit the recount process and are also deliberately trying to twist the ruling of the CCJ.
Legal experts have argued that the CCJ never invalidated any aspect of the recount process. In fact, in its clear, definitive decisions handed down, the CCJ said the recount results must be used as the basis for the CEO’s final report and it is for GECOM to ensure that the CEO complies in this regard.
In a last-ditch effort to prevent the PPP/C from being declared as the winner, the coalition has moved to the High Court in an effort to block GECOM from using the certified recount results and endorse Mingo’s fraudulent figures to hand Granger a second term in office.

Meanwhile, there is a growing level of intolerance by the international community, and from all indications, more severe actions will be taken against the Granger Government, if it continues to hold firm on its position.
US Secretary of State, Mike Pompeo on Wednesday led the way in announcing that visa sanctions have been imposed on top Government and elections officials and all others who are involved in undermining Guyana’s democracy.
“The Granger Government must respect the results of democratic elections and step aside,” Pompeo asserted.
As recent as Friday, United Kingdom Foreign Secretary Dominic Raab disclosed that his country has already started the process of “putting those consequences in place” should the coalition persist in preventing the will of the people from being respected.
Also, on Wednesday, Global Affairs Canada demanded a “swift and transparent” conclusion to the electoral process and pledged to hold accountable all those persons who prevent it.
Moreover, Caricom Chair, Dr Ralph Gonsalves recently expressed that in a normal democracy, what should be a straightforward matter of counting votes “has become the equivalent of a long-running soap opera, pregnant with real danger for the people of Guyana and the Caribbean Community”.
Gonsalves declared: “A rogue clique within Guyana cannot be allowed to disrespect or disregard with impunity the clear, unambiguous ruling of the CCJ. The time for decisive action is shortly upon us.”