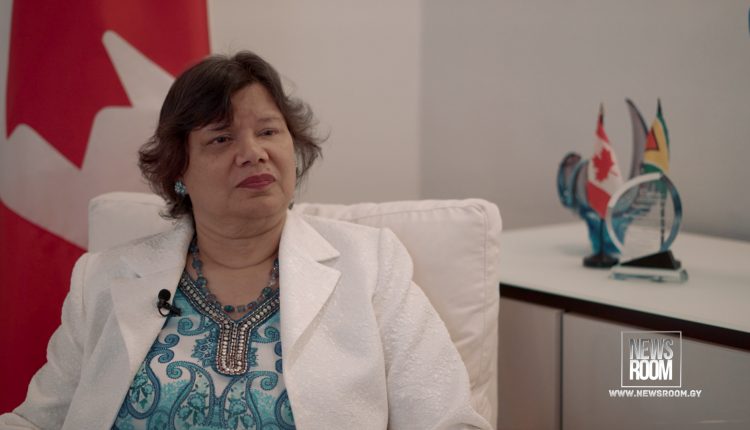 Outgoing Canadian High Commissioner to Guyana, Lilian Chatterjee who gained recognition and criticism for the role she played in the protracted 2020 elections in Guyana, says she is satisfied with the work she has done here, noting that the reproach she received was “pure propaganda.”

“I wouldn’t change a thing,” she told the News Room during an exclusive interview at the Bel Air, Georgetown residence on Thursday.

Chatterjee leaves Guyana on December 11 and will later take up her new post as the High Commissioner for Barbados. She clarifies that her reassignment is not linked to the role she played in ensuring that the election results here were declared based on the recount figures.

She reflected on her final months in Guyana, spent enduring a five-month-long protracted elections period and later witnessing a change in government.

The Canadian envoy says she was quite surprised at the backlash she received for her public pronouncements which insisted on a free, fair, and credible election. She said she was only representing the views of the Canadian government.

“I think what surprised me is that I worked well with the APNU+AFC government and President [David] Granger and his cabinet. We had very good relations. In fact, most of my time here was spent with his government and he was gracious to me and we worked well… I was simply unprepared for the backlash I received,” the Canadian Diplomat says.

Chatterjee insists that she had no intention of taking a political side.

“Canada does not take sides and what we spoke up for was free and fair elections and we stand by that.”

The Canadian diplomat reminded that advocating for the will of the people is something that she spoke about prior to the March 02, 2020 elections.

She believes the pronouncements and the decisions she took were consistent.

“Had APNU+AFC won, Canada would have recognised an APNU+AFC government as we did in 2015. We said and stand by it that we will work with whichever government was democratically elected,” she added.

‘I did not storm GECOM’s office’

For the first time publicly, Chatterjee responds to allegations that she stormed the Guyana Elections Commission (GECOM) command centre at Hadfield Street, Georgetown, days after the March polls.

“I never stormed any building. I think they said I kicked down a door but I don’t even have the strength to do that… that was pure propaganda,” she clarifies.

Along with her western diplomatic colleagues from the United States of America, the United Kingdom and the European Union, Chatterjee played a vital role in ensuring the upholding of a fair result at the March 02 elections.

She doesn’t believe there is any fallout between herself, the Canadian government with the APNU+AFC coalition.

Chatterjee disclosed that a meeting was requested collectively with the other western diplomats to speak with Mr Granger, a few weeks ago, who unfortunately said he was too busy to meet.

However, she meets with Opposition Leader, Joseph Harmon next week.

Chatterjee was among other foreign diplomats who were awarded by the Guyana Manufacturing and Services Association (GMSA) on Wednesday for their efforts in ensuring that democracy was maintained during the elections and the period of uncertainty thereafter.

Asked about her legacy, Chatterjee says she considered everything she has done in Guyana to be her job.

“Some people would say the legacy is that I spoke up for respecting the will of the people, but I just consider that my job. I am humbled by people who think I did a great job but I was just representing the views of my government.”

The outgoing High Commissioner heaped admiration instead on Guyanese who spoke up for democracy. She believes the launch of the Guyana-Canada Chamber of Commerce on Friday is also among her legacy as High Commissioner to Guyana.