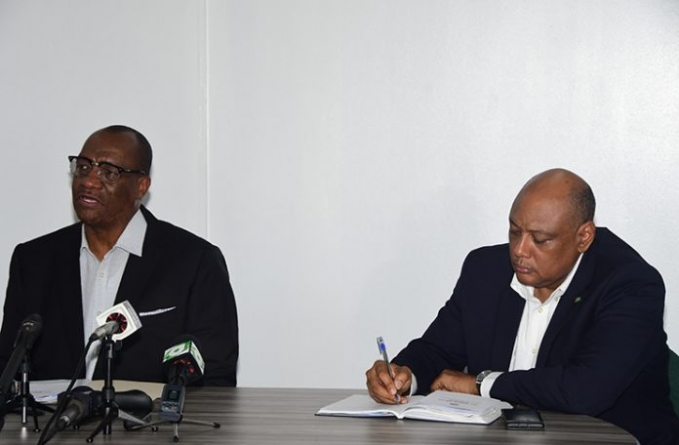 CALLS by the People’s Progressive Party/Civic (PPP/C) and its allies for the ABCE countries to impose sanctions on Guyana amid the current electoral impasse are unpatriotic, A Partnership for National Unity + Alliance for Change (APNU+AFC) Executive Member, Joseph Harmon said on Thursday.

In recent days, there have been open calls by the PPP/C and its supporters for the United States of America, the United Kingdom, Canada and the European Union to impose sanctions on Guyana amid allegations of electoral fraud, although, to date, those claims have been unfounded.

Warning that an imposition of sanctions on Guyana would stymie its development, Harmon told reporters during a press conference at APNU+AFC’s Campaign Headquarters: “I think that is very anti-national; very anti-national, and I don’t see any country in the world that actually would want to invite that level of sanction on its country, knowing fully well the developmental path on which we are on.” Leader of the Opposition Bharrat Jagdeo has been rallying up both local and international support for Guyana to be sanctioned, but Harmon warned that no one would be spared if the country is sanctioned. “Anyone who feels that sanction would only affect one group of persons, they are probably not thinking well, because, once Guyana is affected, we all are affected. And so, sanction is not something that you play around with,” the APNU+AFC Executive said.

PEACE OFFERING
In the presence of the Chairman of AFC Raphael Trotman, Harmon extended an olive branch of sorts to the other political parties that would have contested the March 2, 2020 elections, in the hope that together they can arrive at an amicable solution to the impasse. “I would encourage all the parties to let us sit and work out our differences. Sanction is not the way; this is not a way,” he said, while iterating that the APNU+AFC, and by extension the Government, is concerned about the threats of international sanction, and will take the necessary steps to avert such actions.
Amid allegations of electoral fraud, the UK, Canada, the European Union and the US, along with a number of Electoral Observation Missions (EOMs), such as the Carter Center, the Organisation of American States (OAS), the Commonwealth and the Caribbean Community (CARICOM) have all called for transparency in the just-concluded National and Regional Elections.

In the interest of greater transparency and accountability, President David Granger, on March 14, invited CARICOM to supervise a national recount of all the votes cast at the March 2 General and Regional Elections.

While the electoral process itself was regarded as having been “smoothly executed” by the Guyana Elections Commission (GECOM), things went downhill during the tabulation of the votes cast in Region Four (Demerara-Mahaica). The tabulation process for Region 4 has been marred by a series of events, from the Returning Officer and his staff falling sick, to the People’s Progressive Party/Civic (PPP/C) storming the GECOM command center, to an injunction barring the declaration of the results, and subsequently a series of objections. On March 11, Chief Justice Roxane George-Wiltshire invalidated the March 5 declaration made by the Region 4 Returning Officer, Clairmont Mingo, after it was found that he had tabulated the Statements of Poll (SOPs) in the absence of persons entitled to be present, as outlined in Section 84 of the Representation of the People Act.
But though Mingo, in keeping with the ruling of the High Court, on March 13 tabulated the SOPs in the presence of those entitled to be there, his final declaration was again rejected by the PPP/C and a number of other political parties.

FURTHER DOWNHILL
It was after that second declaration that President Granger and the Leader of the Opposition agreed to a recount, but attempts by GECOM to facilitate such a recount was met with objections. GECOM’s Attorney Excellence Dazzell as well as the country’s Chief Parliamentary Counsel, Charles Fung-A-Fat both advised against the CARICOM initiative. The situation was further compounded when a private citizen secured an injunction from the High Court, barring the Elections Commission from declaring the results. The substantive case is currently before Justice Franklin Holder.

Iterating the Coalition’s respect for the Constitution, the Laws of Guyana, as well as GECOM, which latter institution is an independent constitutional body, Harmon said the Party is in full support of any credible mechanism that falls within the Constitution and Electoral Laws of the country, be it a recount, or an elections petition, to avoid any sanction.