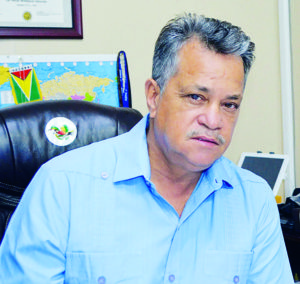 Guyana is facing a double whammy – the first one is the COVID-19 instigated economic slowdown and secondly, the economic slowdown prompted by A Partnership for National Unity/Alliance For Change’s (APNU/AFC) obdurate refusal to demit office having lost the March 2, 2020 General and Regional Elections.

In an interview with this publication, Private Sector Commission (PSC) Chair, retired Captain Gerry Gouveia described Guyana’s situation as a “double whammy”. He noted that at a time when Guyana needed a stable Government to manage the COVID-19 crisis, the Government’s attention is occupied elsewhere.
“This pandemic, which is very serious. And then, of course, the pandemic is being managed by illegitimate leadership. And so, having to manage this pandemic with leaders not deemed legitimate, is causing a serious deficiency. Guyana has been almost isolated from any economic assistance when it comes to COVID-19.”
“There has really been no Government assistance to the Private Sector, to private citizens who may be out of jobs. I don’t see a silver lining on the horizon at the moment. The airports are also closed. That will continue to have a traumatic effect on any recovery of the economy.”

Gouveia acknowledged the role the major banks have played. According to him, they have so far been accommodating to the Private Sector. But Gouveia noted that there are limits to what the banks can do and how far their generosity can extend, making assistance from the Government of the day necessary. And while measures such as Value Added Tax (VAT) waivers have been announced, they are nowhere near enough.
Meanwhile, Georgetown Chamber of Commerce and Industry (GCCI) President Nicholas Boyer observed that the problems Guyana is facing can be solved with a sitting Parliament and legitimate Government. Unfortunately, Guyana has neither.

“The whole world is facing (economic problems). But in countries that have political stability, you see them going to the various (institutions). For the US, it’s their Congress and Senate. For us, it’s Parliament. They’re going to get stimulus plans passed. But we don’t have a sitting Parliament. We can’t get stimulus plans passed,” Boyer said during a recent interview.

“Governments usually have two tools they use to control the economy. One is monetary policies, controlled by central bank. Then there is fiscal policies, which we know as Government budgets. Because we haven’t been able to bring a budget, we haven’t been able to (get a stimulus). We need to get past the political impasse to bring our economic tools to bear,” he said.

Delayed
According to Boyer, a lot of businesses and foreign investors have held off on further investments until Guyana’s political crisis is resolved. This, he said, has a disastrous trickle-down effect on the economy.
“So, the large international investors who are looking at projects in Guyana, are holding off until the political situation stabilises. The large local companies are also following the same pattern. That trickles down into the employment. Those small businesses that support those large businesses are feeling the squeeze,” Boyer said.

“Of course, you have households not consuming as much. So large companies, foreign investors, households, have cut down spending. The small businesses are not getting sales and have cut down their employment.”
Boyer noted that the longer the political impasse continues, the worse it will also get for ordinary citizens who must work and use their day to day earnings to put food on the table. He pointed out that in many cases, households that had a sole breadwinner would have lost that one job that was putting food on their table.
Since the arrival of the deadly COVID-19 disease in Guyana, Government has taken a number of steps from closing its borders to mandating that only essential businesses open their doors. The remaining businesses have received nothing in the form of a stimulus from the Government, which last passed a budget in November of 2018.

The economic problems created by COVID-19 are compounded by Guyana’s political crisis. It has been over four months since Guyanese went to the polls and there has been no lawful result. A 33-day National Recount had shown that the main opposition People’s Progressive Party/Civic (PPP/C) won the March 2 elections with 233,336 votes, while the APNU/AFC coalition garnered 217,920.
Despite their loss, however, APNU/AFC has refused to concede. The coalition has dragged the Guyana Elections Commission (GECOM) before every court from the High Court to the Court of Appeal, eventually ending up at the Caribbean Court of Justice (CCJ), while using arguments that many have described as frivolous and designed to waste time.

The international community has overwhelmingly declared that the results from the recount should be used to declare a President. Calls urging President David Granger to concede have come from several US politicians, the United States Government, United Kingdom and Canada. Other countries and organisations around the world and even the President’s own son-in-law, Dominic Gaskin, have echoed such calls.
But APNU/AFC has been defiant, using supporter Misenga Jones to go to court once again to prevent GECOM from declaring the recount results and force the Commission to use declarations tainted by fraud to declare Granger as the winner.

This latest foray to the court may have been the straw that broke the camel’s back, as it led to the US imposing personal sanctions on APNU/AFC officials and others deemed to be involved in election rigging. And according to observers, the worst is yet to come if APNU/AFC does not respect the will of the people.