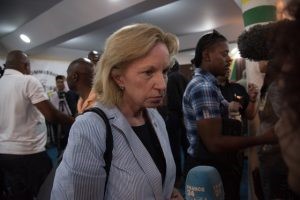 Two esteemed members of the diplomatic community congratulated the Guyana Elections Commission (GECOM) for a job well done in its production of fair and credible elections.

British High Commissioner, Greg Quinn and US Ambassador to Guyana, Sarah-Ann Lynch spoke to the press on the sidelines of a press conference held at the GECOM media centre yesterday, downtown Georgetown.
Lynch said that the day went smoothly, and that that is a great accomplishment.

“I was out in several regions yesterday (Monday), I went to a couple of polling stations in Bartica, Essequibo, Linden and Skeldon also Rose Hall and New Amsterdam and, in each case, the process was well run and smooth.”
Quinn also noted no irregularities during the electoral process, adding that it went just as it needed to.

At this juncture, the public awaits a speedy tabulation and announcement of the results by GECOM.
Both members of the diplomatic community urged calm, and added that GECOM needs ample time to verify the results.
“We have to wait and let GECOM do what it needs to do,” Quinn said.

GECOM had provided an online portal for persons to view preliminary results at the end of E-Day on March 2.
However, the failure of the portal to work was the source of much public frustration. It was only until late afternoon yesterday that the portal began to work, and is periodically updated while the public awaits the full election results.