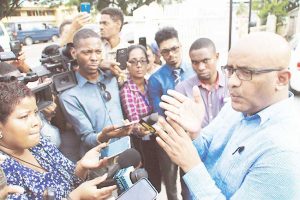 A fight broke out between officials of the People’s Progressive Party Civic (PPP/C) and A Partnership for National Unity APNU) moments after Returning Officer (RO) for Region Four Clairmont Mingo announced that he was about to declare the results for the votes counted in that Region.

Amidst the commotion, Leader of the People’s Progressive Party Bharrat Jagdeo told the media that his party objected to the declaration, since there was no adequate verification conducted prior.
Jagdeo said that moments before the announcement was made, he was informed by the Commonwealth Secretary General that the process was not complete and therefore nobody should be declaring victory.

He said the commotion erupted right after Mingo suddenly decided that he was going to make a declaration.
Representatives of the PPP/C shouted in anger, accusing APNU/AFC of blatant thievery.
“Thief, Thief!” shouted members of the PPP camp as representatives of APNU/AFC led by Minister of Public Health Volda Lawrence responded in kind.

They accused the PPP/C of doing likewise, as members of the diplomatic community, foreign observer teams, staff of the Guyana Elections Commission (GECOM), and the media looked on.
In the midst of the shouts, Jagdeo told the press that the alarm raised by the PPP might have just overturned plans to hijack the elections

“We heard there are secret plans to swear him (David Granger) in as President.  They are not going to succeed, because once they do, the entire international community will come down on them. Guyana will be sanctioned… all of them. We will see personal sanctions because of attempts to tamper with the results of the elections.”
This is a stealing of the elections in the presence of international observers…I am sure that they are in touch with their government. So now the entire world is seeing this.”

Jagdeo reiterated that there would be personal sanctions against the government or any APNU/AFC member for participating in any suspicious exercise.
“There will be sanctions, international sanctions, as well as freezing of their accounts.”
Jagdeo also accused GECOM’s staff of working in tandem with those involved in a ploy to tamper with the electoral process.

“There is a cabal at GECOM that is involved. This is an attempt to hijack the process.”
Meanwhile, Lawrence brushed aside any concerns over the attempts to derail the elections process. She said that her understanding of the incident is that the Returning Officer was about to make the declaration, but he was not allowed to do so.

“This is GECOM’s command centre. These people should be allowed to do their jobs without interference from anyone.  They are being prevented from doing so.”
Minister of Public Security Khemraj Ramjattan, who arrived moments later, shared similar sentiments.

GECOM had been awaiting the results of Region Four to announce the winner of the Regional and General Elections.  The incident which broke out at the command centre at around noon today has further stalled the process towards declaring the final results of the elections.